If you are like me it’s fun to try new foods or cook methods. I think this has been around for a while now, deep fried corn on the cob. I couldn’t find any history on it but I would say it started at a state fair somewhere. I ran across a recipe and knew I had to try it since I love corn fixed any way.

Since I had to deep fry some country fried steak fingers would go good with it. I also had a recipe for some bacon blue cheese potato salad that sounded good for a side. Saturday I had the potato salad made and was about to prepare the corn and steaks when our son called and asked if we wanted to come for some brat patties. His in-laws were stopping in and we enjoy visiting with them so I said yes. I would take the potato salad along and we could do the steaks and corn Sunday.

They had a choice of brat or hamburgers, sliced onions, tomatoes & lettuce. Plenty of snacks and a tomato cucumber onion marinated salad. Our son did the burgers and brat patties on a Weber Q200 I gave him and did a fine job. It was nice enough we all sat outside, ate and had a good visit.

So today was really a nicer day to cook out, not as humid. I got the recipe for the corn from just a pinch that gave it done 3 ways. I chose the #2 Clark’s Outpost Restaurant to try. For the steak fingers it was like doing country fried steak. I had two minute steaks from Kah meats I cut into 1 inch strips and marinated them in cup of buttermilk and two eggs beaten for about an hour in the fridge. After I made up the corn I did the steaks; drained and dipped into flour and Lawry’s seasoned salt. They all set in the fridge a couple of hours before cooking.

I already had my Lodge 6 quart Dutch oven with a mix of veggie oil and lard to cook with and heated it on my Camp Chef gas burner to 370 deg. I did the corn first and then did the steaks. All was cooked about 3 minutes. My wife had made us a Romaine salad with pickled beets and we had Champaign dressing on it.  I made a dip sauce for the steak fingers that was an equal mix of mayo and sour cream, a half that of Maille mustard and some Cajun seasoning.

It all tasted pretty good but the wife and I both agreed we would rather have steamed corn. My expectations for this were too high! But the corn was early corn from the grocery so some fresh picked corn may be better. The steak fingers were great! I missed pics of doing the steak fingers but you should get the idea.

Caution: I don’t recommend doing fried corn in the kitchen. You get some serious grease pops from the water in the corn so do it outdoors. 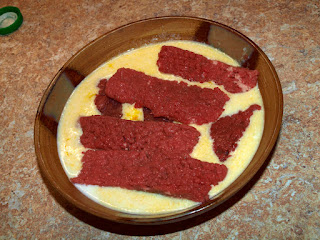 Getting the corn ready 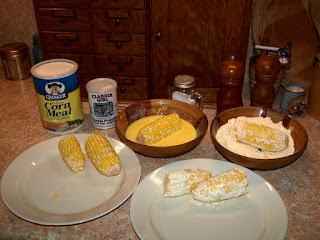 Fried up the corn first 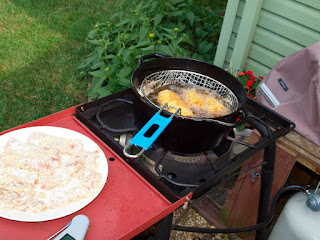 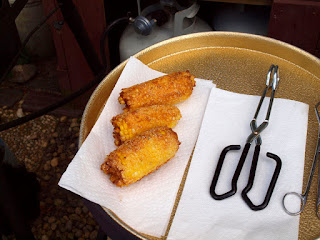 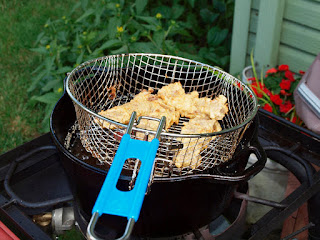 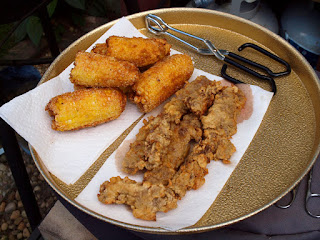 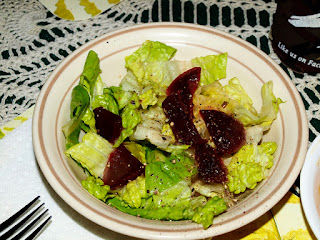 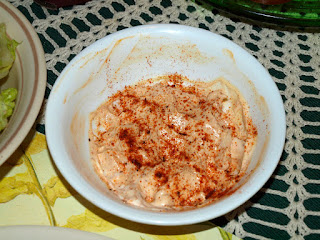 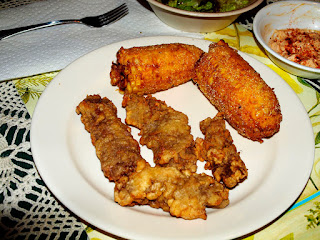