I was not going to post my leftover meal tonight but looked so good and thought some may like it. It tasted as good as it looks.

I made some brown gravy from a packet of Pioneer re-heated the leftover tri tip from yesterday in the gravy. I cut up a few potatoes and nuked them for 5 minutes, smashed them and topped with some garlic flakes and butter. Then they went under the broiler to brown a little. I sliced a tomato and added a little olive oil, white balsamic vinegar, salt and sliced fresh basil.

I made sandwiches from the gravy covered meat; it was very tender almost like ground meat. My wife said it was better than last nights except for the gorgonzola butter. I don’t know why I don’t make these more often. A tavern in town sells the best Swiss steak sandwiches, with brown gravy and we used to get carry outs often when we were still working.

Any good sliced beef leftovers would work, round steak or sirloin done in a Crockpot would be good too. They are a little messy to eat but are they ever good.

The beer was a new one from Sandman’s; Rhinegeist from Cincinnati, I had the Puma which is a pilsner. It tasted like a good German beer. 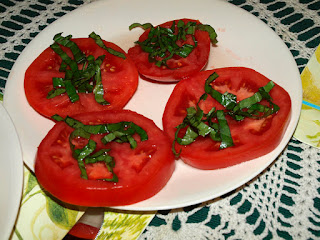 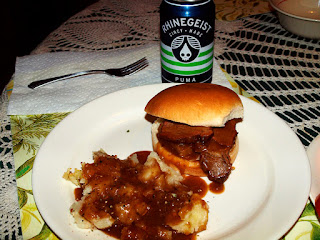