I don’t know about most of you but it has been almost too hot to cook out or in! We have had 90’s heat for over a month now. It’s been very humid but no rain. We are getting a small break only 89 today!

My butcher had split chicken halves for $1.65 a pound so I got two. I had some Yodhida and Lawry’s teriyaki marinade that needed used so made brine for them. It was a half-gallon of water,1/3 cup kosher salt, 1 cup Yoshida and about a half cup teriyaki. They were in the brine overnight. I got the idea for the brine from one of Smoker Pete’s post on Lets TalkBBQ.

I had plenty of a pasta salad left over for a side. I let the chicken halves air dry in the fridge a few hours then seasoned them for the smoker. I used Big Dick’s Big Kahuna on one for the wife and used the Margarita on mine.

I cut the breast from the wife’s and served her. It was minus the wing tips! To me the middle wing section is the best part of the chicken and then the leg and thigh. I had the two wing tips, a leg and thigh from my half.

Was it ever good, full of moisture and tender with some great flavor. The wife said she really liked hers with the Big Kahuna; it was a little sweet for me but tasted good. The Margarita was good on mine. After we were done the wife was ridding up and said boy yours was hot! Here she had seen some crispy skin on what was left of mine and was stealing it!

Brined, seasoned and ready to smoke 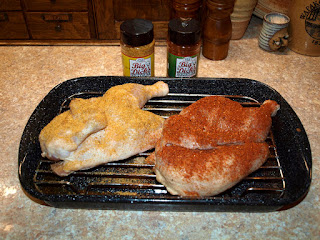 Ready to take in 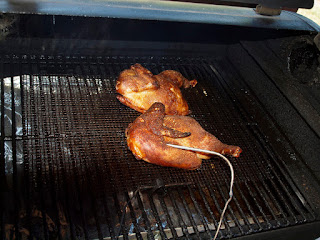 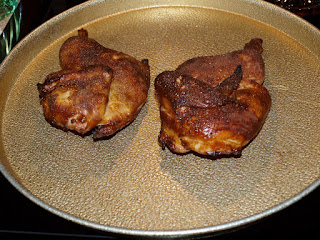 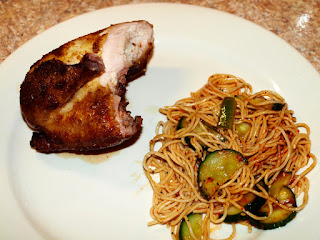 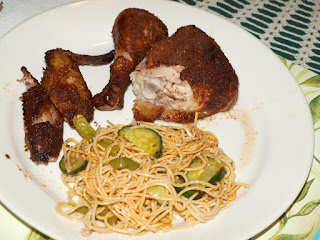