Six months or so back I wanted a new food processor and bought a Ninja since it came with a bread dough blade. Me and dough just do not get along; I used a bread machine for several years and had good luck with it. I did make some pizza dough with it. I think my best bread was done with the No Knead Artisan Bread in 5 cook book.

I was just getting some tomatoes ripe in my garden and I wanted to try the bread dough blade in the Ninja; pizza was the perfect choice. I found a recipe for two 12 inch pizzas and I would do a Margarita style pizza with my tomatoes and I had fresh basil too.

I proofed my yeast and added it and two cups of flour to the Ninja and started using the dough setting. I then added the flour a cup at a time. I had 4 cups in and it was not coming to a ball; Ninja was groaning a little! Then I heard some noise and looked over and Ninja had come to life and was trying to jump off the counter! I shut it off and it looked like one sticky mess.

I got it scraped out into a bowl the best I could. It wanted to stick to everything until I got enough flour added to make into a ball. I let it rise for an hour then cut in half and placed into bowls covered and in the fridge for overnight. I am not going to describe the mess I had to clean up!

My recipe called for par cooking the crust for 10 minutes on a pizza stone that had been heated to 500 deg. for a half hour. I did mine on my Weber Spirit and a Lodge cast iron griddle. I checked the first one after 6 minutes and the bottom was pretty brown so I pulled it and did the second crust for 5 minutes.
They also looked more like thick crust instead of the thin crust I wanted. I decided I would finish them under the broiler inside.

I made a sauce from a can of diced tomatoes pureed and added some tomato paste and oregano. I made up the first with my sauce; diced peppers, onions and some Mexican blend shredded cheese topped with some Margherita Brand Pepperoni. The second one was my sauce, shredded mozzarella, sliced tomatoes, sliced mozzarella and fresh basil leaves.

I did them under the broiler but had the shelf too high so we ended up nuking them in the microwave to finish. It was just not my best pizza day!!!  I think the next time I want pizza I will just order from Sandman’s carry out and pick it up 20 minutes later!

Tomatoes for the pizza 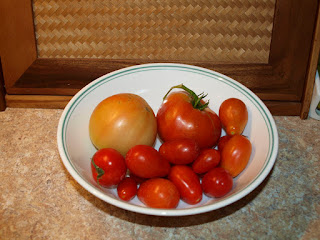 One pizza crust made 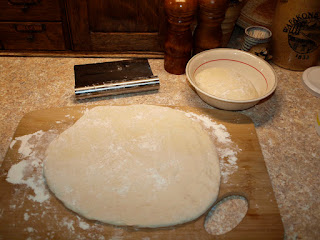 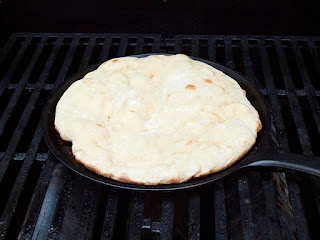 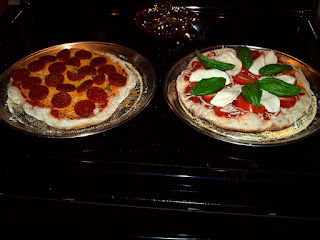 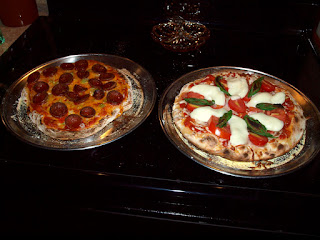 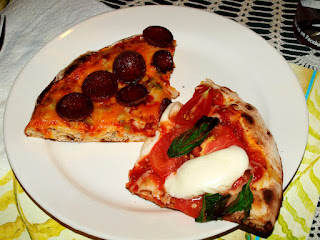