I found a recipe on Traeger that sounded good but it was low and slow. I thought well I know LTBBQ member (Muebe) does them this way and calls them a trisket, cooked much like a brisket. The recipe was with their marinade overnight then seasoned with their rub. I used Stubbs Beef, soy, garlic and red pepper marinade and used Big Dick’s Steak-It rub.

The recipe called for smoking for 4 to 5 hours then in a foil pan with ½ cup of water; covered with foil and back on the smoker for 45 minutes at 350 deg. Let rest 15 minutes before serving.

The roast had about a ¼ inch fat cap that I trimmed off then placed in a plastic bag with 1 cup of the marinade overnight. I got up at 7:00 AM to beat the heat and get it cooked to warm up for supper. I drained the roast well then seasoned it well with Big D’s Steak-It. I had the Traeger heated to 200 deg. and got the roast on at 7:45.

I thought 4 to 5 hours was a bit long and since I was doing at 200 deg. after 3 ½ hours it went into a foil pan with 1/2 cup water, covered with foil and at 340 deg. grill level for 45 minutes. I pulled it off and let set covered for 20 minutes then uncovered and let cool then in the fridge.

I had six ears of corn picked fresh this AM and two nice tomatoes from Suter’s red barn. I thought I would have the corn steamed and a salad with the tri tip. Our kids and grandson said they would eat with us and bring the salad greens they had just bought.

When they got here I had the corn ready to steam and it went on for 7 minutes. I had some gorgonzola chive butter for the corn and beef. We all just made up our own, nuking the beef to reheat and it was delicious. My wife said she really liked the tri tip, and I think this shows it is pretty versatile; tasty cooked fast or low and slow. The beef was very tender, not overly moist but the gorgonzola butter took care of that and Big D’s Steak it was great on it. 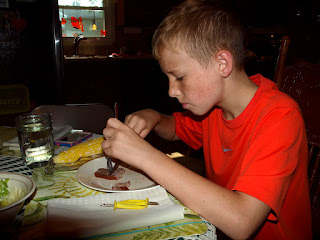 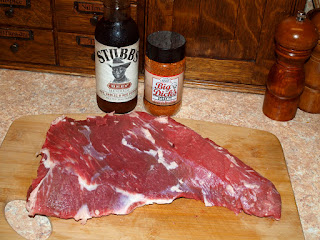 After marinade seasoned for the smoker 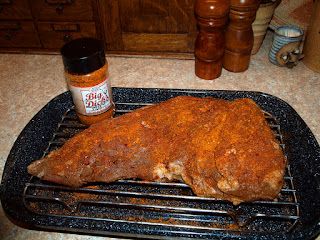 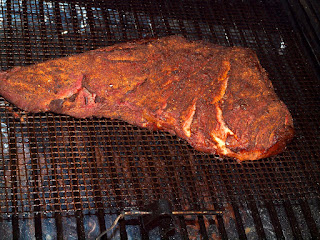 Done with a 20 minute rest 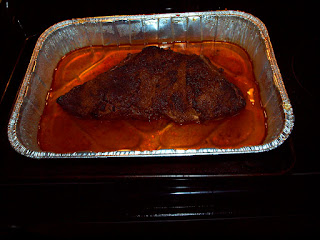 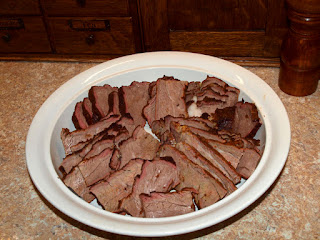 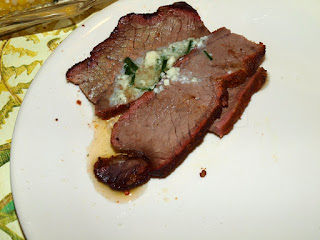 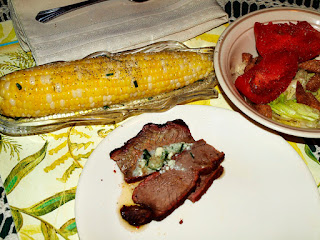