Smoked Sauerkraut Brats on the Griddle

I am sure glad I had an easy meal planned for supper; it was pushing 90 deg. out there. We have not had any rain to amount to much the past few weeks. I haven’t had to mow grass but it is starting to turn brown.

I had some sauerkraut brats from Kah Meats and would have a Romaine salad with some Tennessee tomatoes. I had two ears of corn from last night that I didn’t batter; I just fried them in the oil for 3 minutes. I cut it from the ears and told the wife if it wasn’t good we didn’t have to eat it.

I got the brats on my Traeger at 195 deg. to smoke for an hour.  After I got them on I put the corn in a Lodge CI server with two pats of butter, a little garlic herb salt and it went on the smoker; it should be good and hot to serve. I sliced two Vidalia onions and cut in half to do on the griddle for the brats.

At 5:45 I fired up the Camp Chef griddle; it only takes about 10 minutes to get up to temp. I had it set for about 500 deg. At 6:00 I put the onions on and then added the brats from my smoker. I added two pats of butter to the onions. It only took a few minutes on each side for the brats and the onions were just about right. I took them inside to serve and got the corn from my smoker.

We both had onions and mustard on the brats. I had blue cheese dressing on the salad my wife had made. It was a pretty good supper for a hot summer evening. We both thought the corn was extra good.

Brats and corn on the Traeger 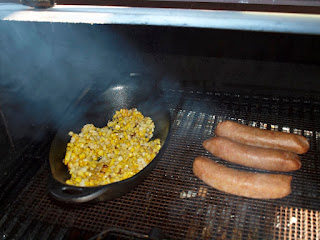 Brats and onions on the griddle 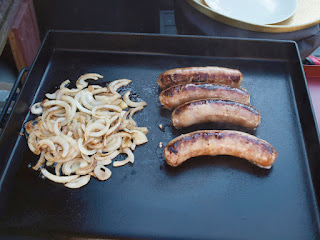 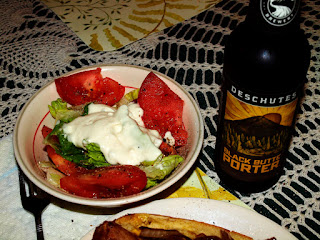 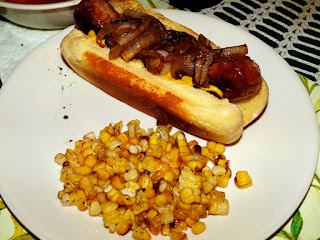