In the summer we eat a lot more sandwiches and only cooking for two I end up wasting a lot of buns. I do not like bread after freezing so I end up throwing some away unless I can use them in a recipe. I wish buns came in smaller packages than eight!

The other night we had brats so I had six hotdog buns and two brats leftover. I didn’t feel like brat sandwiches again but wanted the brats plain with a side. I had two big Tennessee tomatoes so thought why not use the buns and make panzanella. I found a recipe by Ina Garten at Food Network that sounded good with Champaign vinaigrette. I had some Champaign dressing so all I had to do was cut up the buns and toast them.

I had a red and yellow pepper, two large tomatoes, a half a English cucumber, a small Vidalia onion, 3 Tbs. capers, 20 fresh basil leaves, 4 of the buns cut up and toasted in 3 Tbs. olive oil and a cup of the dressing. I mixed it all up and let set a half hour before serving.

I mixed up a dip for the brats I thought was pretty good. I used about 2 Tbs. each of mayo and sour cream, a Tbs. Maille Dijon mustard a good teaspoon of Cajun seasoning and a few drops of hot sauce.

I heated up the brats in the microwave and served a meal that was easy for a hot summer evening and pretty tasty.

If I was buying bread for panzanella a good crusty coarse bread would be best. Any good Italian vinaigrette would be good and you can use dried basil if you don’t have fresh. 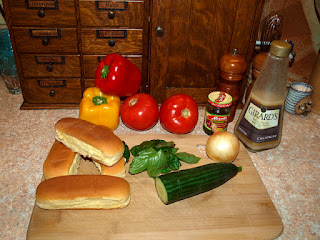 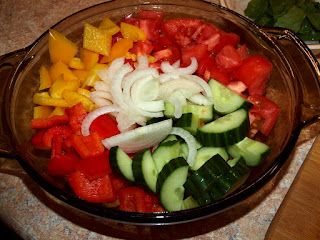 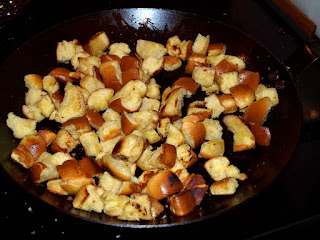 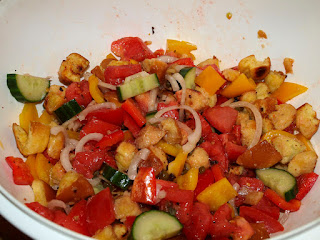 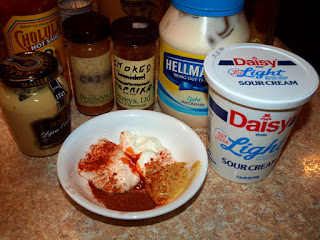 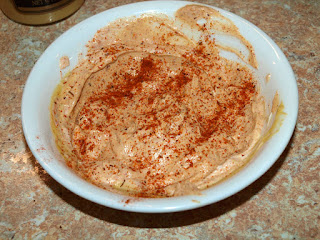 Added the fresh basil near the end of rest 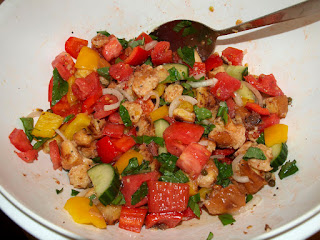 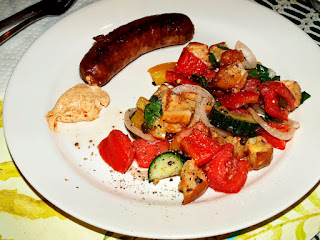