I first started making these over 40 years ago. I think I got the idea from my Mom making them for her grandkids. One day I kept my wife’s cousins boy who was about the same age as our son. I made them some of the bread, cut a hole in the middle with a cookie cutter. I fried them in a little butter and cracked and egg in the hole; I did them 3 or 4 minutes per side. John loved them and called them bullseyes. Every time he came down he said Uncle Don; will you make me a bullseye?

When I saw them do a sandwich with two of the toast and eggs; I knew I had to make one. They used two slices of bread sliced from a round boule cut holes in the middle to add eggs. It would actually serve two when cut in half. After they turned them they added a slice of cheese and some bacon to one and then topped it with the other one and cooked long enough to melt the cheese. You have to watch you don’t burn the bread; I got mine pretty brown.

The only bread I had that I thought would work was some cinnamon swirl bread. I had some jowl bacon I had cooked on my Traeger yesterday to use and a slice of American cheese. I did them in my Lodge CS skillet in a little olive oil.

Did that ever taste good! After I was done I thought it would have been good to just pour some maple syrup over and eat with knife and fork. 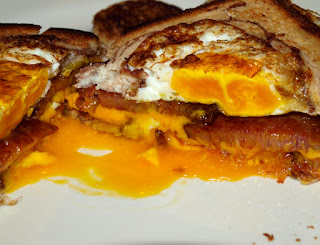 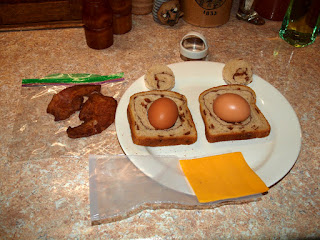 Bread and eggs in 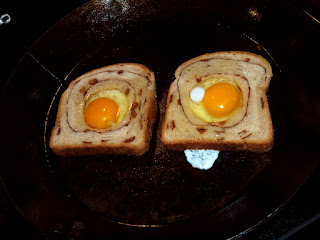 Turned and cheese and bacon added to one 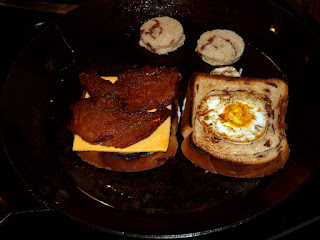 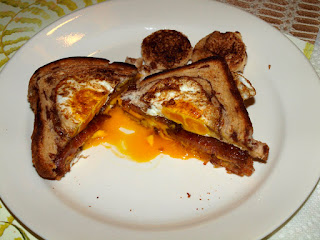