I had to have pork and kraut for our traditional New Year’s good luck meal. I don’t think I have missed having it in over 20 years. I am not German but my wife’s Mother was. I picked this up from a friend I saw in the grocery buying a can of sauerkraut. He said he had to have his pork and kraut New Year’s Day.
It sounded good to me.

The last few years I have made my own kraut and that makes it better. I have a cousin from KY who is related through a half-sister of my Dad. I never knew he had a half-sister. She found me on the net and I have visited her several times. Her Father had to have his black eyed peas on New Year’s Day; so I now have some in his honor.

I got up at 8:30 and got my Traeger started. It was 28 deg. and it groaned awhile before getting warmed up. I had a rack of BB ribs, bockwursts and bratwurst to smoke. They went on at 200 deg. for a half hour then went to 225 – 250 deg. grill level for another 1 ½ hours. Our son and family were coming down to eat. He and the grandson don’t care for the kraut so I had about 5 ribs left that I finished up on the Traeger for them. Even though his wife is mostly vegetarian she loves the kraut and the knopfles my wife makes and even ate a brat.

I got all layered in my Crockpot about 11:30 to cook all afternoon. I usually laid some sliced onions in the bottom, topped with the pork and then, kraut some salt and pepper, a lager beer and then water to almost cover. A fellow LTBBQ member layered in the kraut in one of his cooks, don’t remember who but thanks for the idea. I layered in some sliced onions, some kraut, the ribs, more kraut, the bockwursts and bratwurst then more kraut. I used a quart of kraut.

About 3:30 my wife made some knopfles, German drop noodles, she learned from her Mother.  I like to add them in so they have a couple of hours to take on the sour from the kraut. This is best over mashed potatoes but I had some new red potatoes I steamed and added to a casserole dish, smashed and added melted butter then baked a half hour at 350 deg. with my convection fan on.

I heated up the ribs for the son and grandson at 6:00 and we all ate some good food. We had some crusty bread and butter with it.

After our food had settled some; the wife and grandson baked some soft pretzels that were good. Some were topped with salt, butter and cinnamon.

We are having leftovers tonight but I bought some Bob Evens mashed potatoes to have!

Ribs and sausage ready to smoke 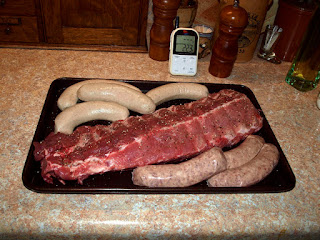 After about 2 hours on smoke 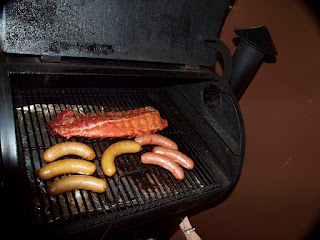 Pork with my kraut 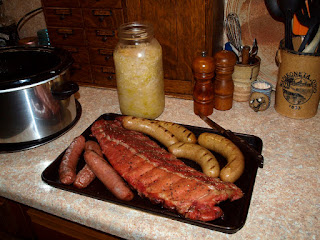 Onions, some kraut and ribs layered in 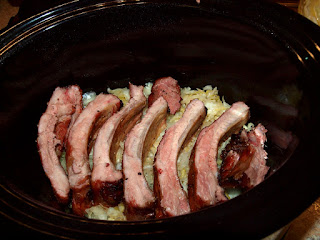 More kraut and sausage layered in 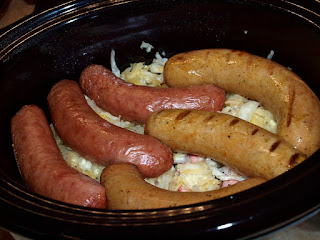 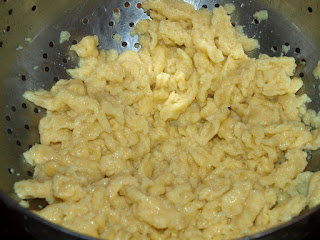 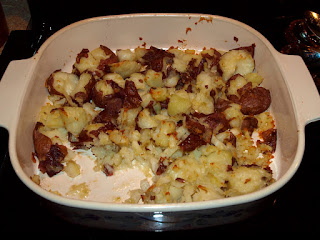 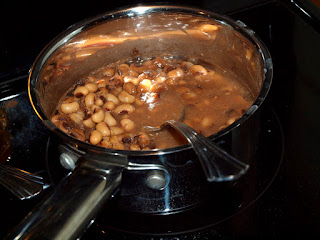 Pork and kraut ready to serve 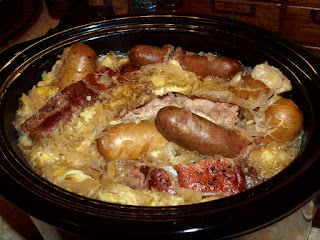 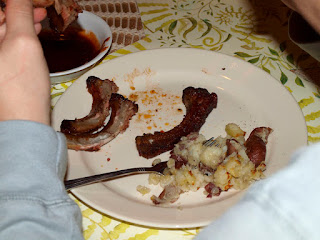 My bowl of black eyed peas 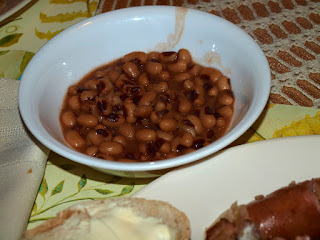 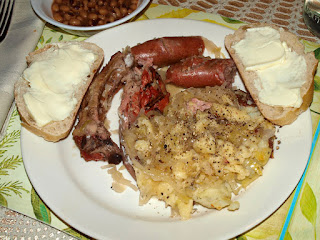