Made a Proper Ghee

Today was a kind of fun day with cooking. I am kind of in a winter blues or hum drum state so this helped cheer me up. A while back I made Ghee for the first time or so I thought. After a fellow LTBBQ member pointed out that I had just made clarified butter; I did some research and found out for a proper Ghee you have to cook it longer.

When making Ghee you start with the butter in a sauce pan on medium heat and when it starts to boil turn it to low heat and cook, it will separate into three layers. The milk liquids will form a foam on top, the milk solids will go to the bottom and the Ghee will be in the middle. Use a slotted spoon to skim off  the foam on top as it cooks. Cook it until the milk solids in the bottom turn a light brown color. I did a pound of butter and it took about 35 minutes.

Set the pan off the heat to cool. When it cools some strain through cheese cloth into a jar. Store at room temperature and it should last at least a week; probably longer.

I read a great article at 101cooks.com on making Ghee and they said to use the best butter you could. The first batch I made, but only took it to the clarified stage, I used a pound of Troyer's butter made from grass fed beef . I ended up with just over a half pint. Today I used a pound of Kerry's Gold Irish butter. When it was done I had a full pint of Ghee. In the end it was cheaper using the more expensive Kerry Gold butter.

I used the clarified butter I made to cook with and really liked it; it did good with a fried sunny side up egg and made great pop corn. I know I will like the Ghee better! 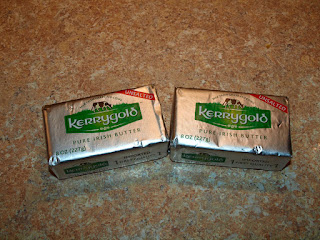 Ghee is done, ready to strain 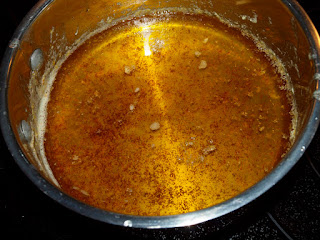 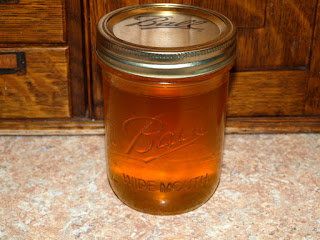 Email ThisBlogThis!Share to TwitterShare to FacebookShare to Pinterest
Labels: Condiment