I like to continually try new food and the preparation of it. I have always wanted to try Caviar. All I have ever seen is how expensive it was so I never tried it. Then my friend Ahron posted a photo of a spoon full of the pretty red eggs, renewed my interested in trying some.

I searched the net to see if there was some that was reasonably priced for my budget. It said salmon and lumpfish roe was lower in cost. I found some Romanoff’s red salmon roe Caviar at Amazon, two 2 oz. jars for $27.

I looked for ways to serve it and one popular way was to serve it on blini’s, little pancakes, with crème fraiche, cream cheese or sour cream. I wanted crème fraiche but I can’t get it around here anymore so I got some chive onion cream cheese and sour cream. I found some smoked nova salmon to go along with it too. Never heard of nova salmon but found it is cured and then cold smoked. It was $15 for 12 oz.

I told the kids to come down late afternoon and we would try the Caviar and later get carry ins. The blini recipe I used was a cup of self-rising flour, an egg, a cup of milk and a good pinch of salt. I made them up and I got 28 blini’s from the mix.

I told everyone they had to wait until I made some for myself and got photos! I made up three, two with cream cheese, a slice of the salmon and a small spoon of the caviar topped with some fresh chives and one with sour cream. After all made up some for themselves I tasted some plain. My thoughts were they were smooth with a slight fish taste, not as strong as I had thought they would be, but salty on the backside. I had two plain on crackers and a few more with cream cheese.

Our daughter in law would not try any and the grandson was reluctant but tried it and had three with crackers. My wife said she didn’t want any but tried some and said not bad. I think the son and I ate the most. The daughter in law had blini’s with black raspberry jam for her snack.

I had thought we would go through both jars but we all got enough from the one jar. At least now I can say I have tried caviar! The cost was not too bad for a little snack for six at, around $30US.

For the Caviar appetizers 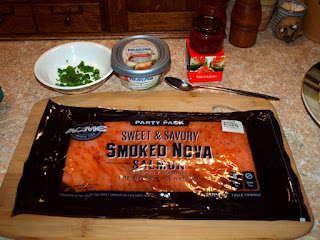 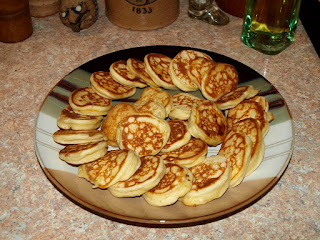 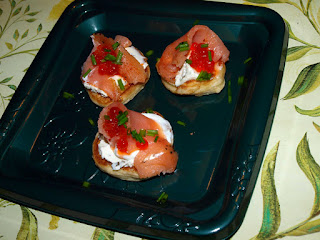