With the cold we have had the past week my Crockpot is getting a lot of use. Wednesday I had a pound of butter garlic marinated chicken from my butcher in the pot and added a can of cream of mushroom and a can of cream of celery. At supper time I cooked some Mrs. Reem’s noodles and that made an easy meal.

I had a nice 3 pound chuck roast from my butcher. It was too big for the pot to have room for carrots so I trimmed a piece of and froze for later. The last chuck roast I did I added an envelope of Lipton’s beefy onion soup mix and an envelope of Pioneer brown gravy mix. We all like the gravy that makes so I wanted to do this one the same. I thought I had brown gravy mix but all I had was country gravy; a little Kitchen Bouquet took care of that.

I sprayed the Crockpot with olive oil and added a layer of sliced onions for the beef to set on. I browned the roast well and added it to the pot and deglazed the skillet with some water. I poured the onion soup mix over the roast and then added the liquid from the skillet. Next I mixed the gravy mix in 2 cups of water and added some Kitchen Bouquet and pour4ed that over the roast. I had six carrots I cut up and added them around the roast. I had some celery so I added it to the top for some flavor. I set the pot on high for about an hour then turned to low; it would be on for a total of six hours.

At 4:30 I removed the beef from the pot and trimmed any fat off. It was fall apart tender and I added large chunks back to the pot. I usually liked mashed potatoes with a pot roast but for something different I have not made these in a while. I baked six med russet potatoes in the microwave. When I could handle them I smashed and remove the skins in a casserole dish. I used a ford to bread them up evenly and added salt. I sprinkled on some Penzey’s dried garlic flakes then melted a stick of butter and pored over. These went into a 350 deg. oven for 45 minutes and got some browning.

I had some beer bread left that was getting a little old but a light toasting made it good for bread and butter. We ate at 6:00 and what’s not to like about this meal! 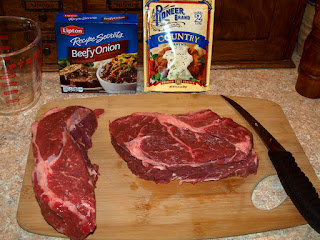 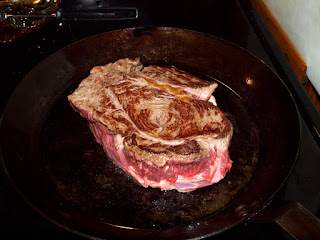 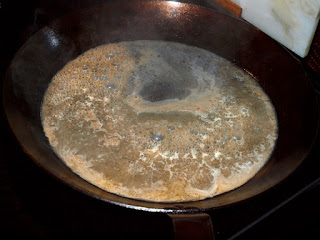 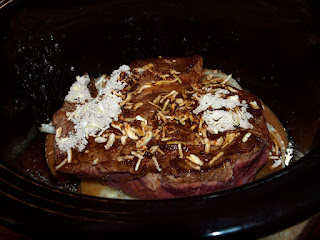 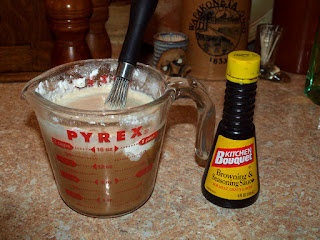 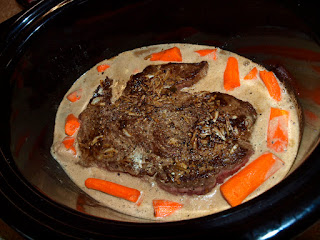 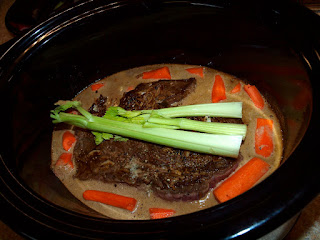 Ready to remove meat and trim the fat 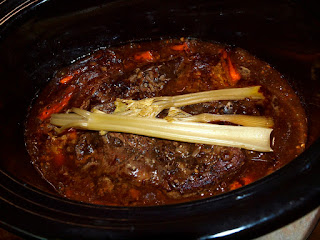 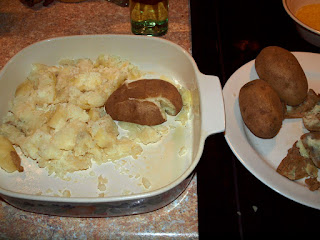 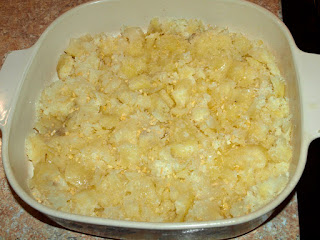 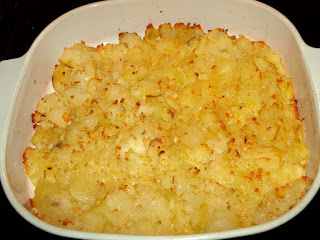 Beef and carrots ready to serve 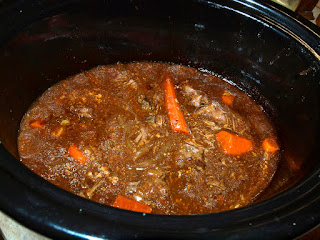 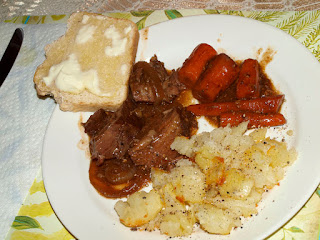 Email ThisBlogThis!Share to TwitterShare to FacebookShare to Pinterest
Labels: Crockpot