I was hungry for a meatloaf and every since I saw the recipe for a hasselback casserole I wanted to try it; they would go well together.I also wanted to do it on my smoker and today was suppose to be 35 then back in the deep freeze tonight. It never made 35; never got above freezing.

I made up the meatloaf early; a salsa meatloaf. I forgot to add a half cup of cheese so got it mixed in before going on the smoker. I did it at 200 deg. For a half hour and then eased it up to 290 deg. Grill level. It took an hour and 50 minutes to get it to 160 deg. IT. After it cooled it went in the fridge; everyone heated it up at supper time.

I sliced the potatoes on a mandolin fairly thin. I miss judged how many potatoes I needed to fill my 10 inch CI skillet. I stacked a round of potatoes on the outside and then opened a can of sliced new potatoes to fill the center. I had sprayed the skillet with olive oil, added some seasoned garlic salt then melted 3 tablespoons of butter, mixed in 3 tablespoons of olive oil and poured over the potatoes. The recipe called for some chopped onions to add and work some between the potato slices. They went into an oven at 360 deg. For one hour. I then sprinkled on some chives and brushed on 3 tablespoons of melted butter; and back in the oven for about 10 minutes then added some 4 state shredded cheddar and back in for another 5 minutes. I didn't add the onions since we had the grandson for supper.

I made up a dish of corn pudding, my Mom called it scalloped corn. It was a can of creamed corn and a can of yellow corn, ¼ cup milk, an egg, about a half sleeve of saltine crackers crushed and a teaspoon of sugar. It went into the oven with the potatoes the last 45 minutes. It all came together pretty well.

Our son was sick so we had the grandson all afternoon; his Mom was in Toledo with her parents for a visit. She got here about 5:30 and stayed for supper. It all tasted pretty good; love the potatoes that way. I liked the meatloaf but thought it could have used some sauce like just heated salsa. Everyone else liked it the way it was. I had my usual bread with a little butter.

My wife had been to the Country Store to get some good Troyer's butter; it's made from grass fed cows cream. She also brought home my favorite pie; a Troyers black raspberry; it's like a homemade pie. Troyer used to just make smoked trail bologna but has branched out to more food products. It is located up near Tenthunter, Cliff, in Trail, Ohio.

We had the pie for dessert and I had some Edy's vanilla bean ice cream with it. 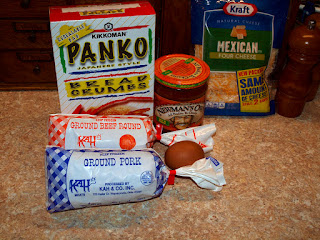 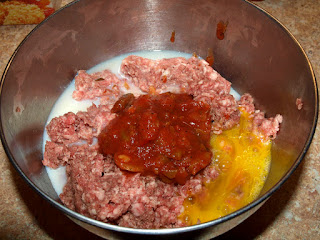 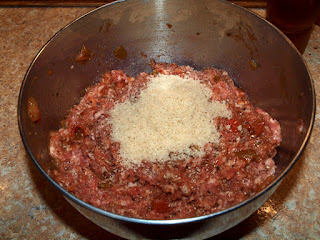 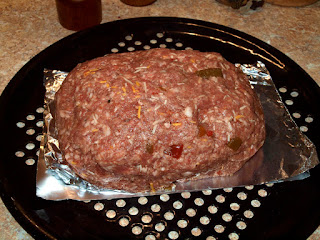 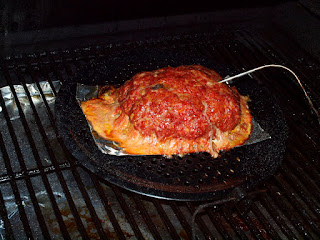 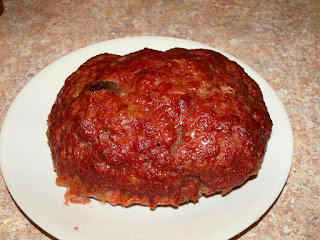 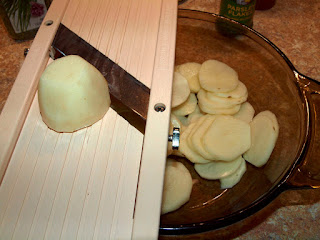 Skillet ready for the oven 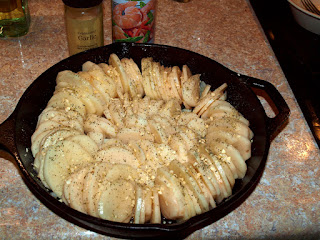 Corn ready for the oven 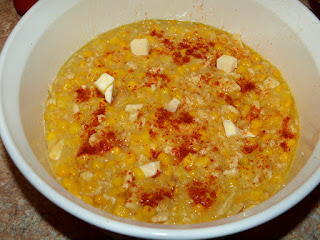 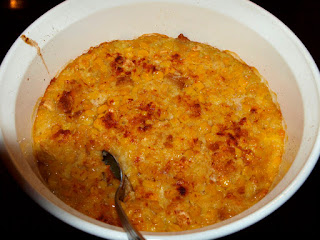 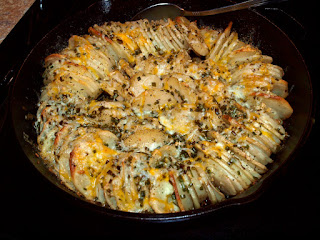 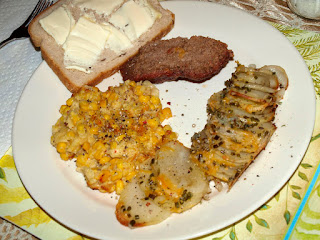 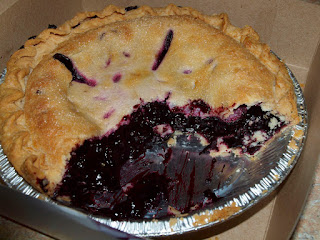 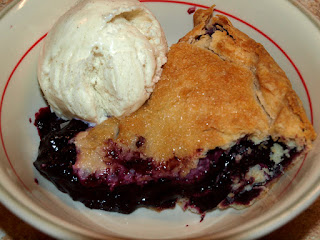