I first tasted these pickles at J Maries, a good restaurant here in town. I loved them and found a recipe to make some. I made a quart and didn’t like them, way too sour and not like the ones at J Maries. The recipe had a half cup apple cider vinegar with the beer.

I found a recipe for half sour pickles that only had salt and water to ferment so I wanted to try it with the IPA beer. I used English cucumbers since they come in plastic wrap with no wax on them.  I used a quart Fido jar to put them in, they have a clamp lid and gasket that is supposed to let the gas out but no air in.

I mixed a Shiner IPA beer with a tablespoon of salt and stirred until dissolved. I added about a teaspoon of coriander seeds,  four pepper corn blend, and dried garlic to the jar. I cut the cuckes up to a length so I could leave room for my ceramic weights and liquid to cover. I then cut them into fourths. I laid the jar on its side and stuffed in as many spears as I could. I slid in a bay leaf then poured in the beer and salt mix; then added the weights to keep the cukes under the liquid.

These will set on the counter for 3 days and then in the fridge. I will probably let the in the fridge about a week before trying them. I will update how I like them. 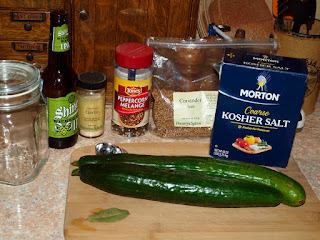 All in with the weights in place 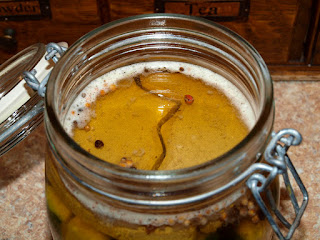 Will set for 3 days to ferment 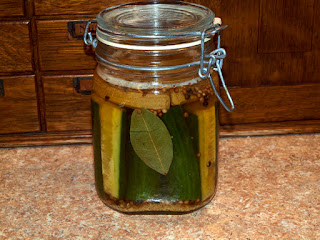 We had broasted chicken and some slaw, from our favorite carry out Sunday for supper. I thought I would try my pickles; they would go with chicken. I tried a pickle when I put them in the fridge, a little too salty. After a few days in the fridge the salt mellowed out some. The flavor from the IPA beer was maybe a little too much. I like them but our daughter did not. Maybe my 3rd try will be better. I am going to use a cup of the beer and a cup of water, 2 teaspoons of salt and a tablespoon of apple cider vinegar; I thought they could have been a little sourer.
Posted by Smokin Don at 5:39 PM