Yesterday I made up the pound of ground chuck following Ahron, africanmeat’s recipe for Eastern kebabs. Ahron is a fellow LTBBQ member. I changed the seasoning some; in place of the crushed red pepper and cilantro I used a large TBS of Savor’s Savor All. It went in the fridge overnight.

My sides were some stuffed mini sweet peppers. I stuffed with a mix of cream cheese, gorgonzola cheese, dried garlic flakes and fresh snipped chives. For 3 of them I wrapped some of the cheese in a half slice of dried beef and stuffed it. My other side was fried green tomatoes, dipped in flour, egg and cracker crumbs.

I think this was a first for me using 3 of my outdoor cookers for one meal. I did the peppers and kebabs on the Weber gas grill. I had the Traeger on at 200 deg. to hold them while I fried the green tomatoes in my Lodge steel skillet on my outdoor gas burner. In the skillet was olive oil to cover the bottom and a large pat of butter.

My wife went to a concert with her aunt today so it was a quiet afternoon with the dog! After lunch I got the cookers all ready and then had a short power nap..

At 2:00 I cleaned the peppers and stuffed. A muffin pan was the best popper holder I could come up with.  I placed them in the fridge.

At 3:00 I made up the kebabs on my wide skewers. I had trouble before keeping the meat on some narrow skewers. I read to rub the skewer with egg yolk first. I did one that way and used Ahron’s tip of wetting your hand with cold water and smoothing them some after forming on the skewers. They went in the fridge.

At 4:00 I breaded the sliced green tomatoes and they went in the fridge. Whenever I bread something with flour, egg wash and crumbs I think the breading stays on better if they set in the fridge an hour or two before cooking.

The wife got home and set out with me a while and chatted. The cooking went well; I had the Weber heated to about 425 deg. with grill grates. My Traeger was on at 200 deg. I did the stuffed peppers for 15 minutes on the Weber and then in the Traeger to hold. I did the kebabs for 5 minutes each side and then they went in the Traeger.

I had the skillet heated up and fried the green tomatoes. I took all inside and served with some bread and butter. Tasted great; we both liked it all. The meat stayed on all the skewers well so the egg yolk might not be needed. My dipping sauce for the meat was some of Terry Ho’s Yum Yum sauce; a Japanese shrimp and steak sauce. It was spicy sweet and not a lot of heat. I like it and should be great with shrimp.

I guess I should call the kebabs Eastern style with a Savory flavor and Japanese sauce. 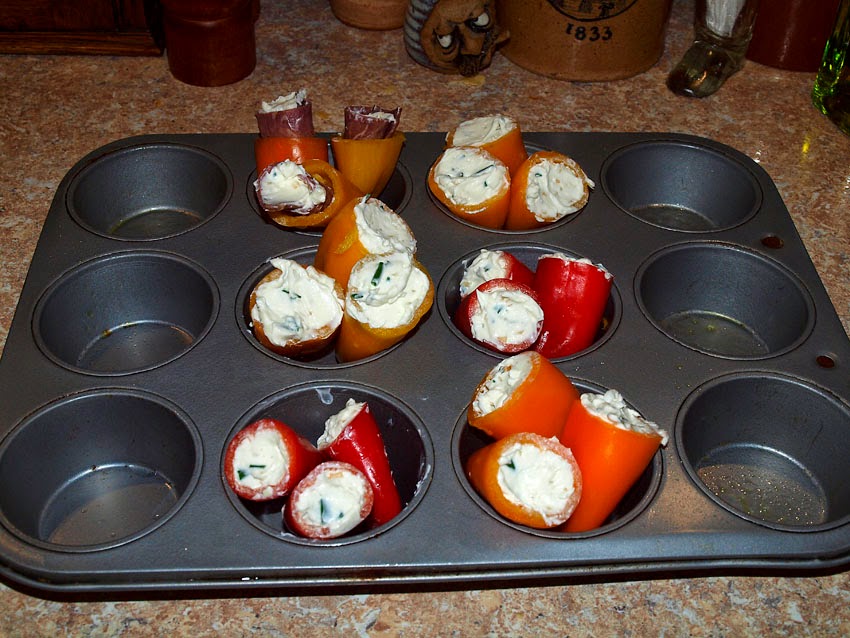 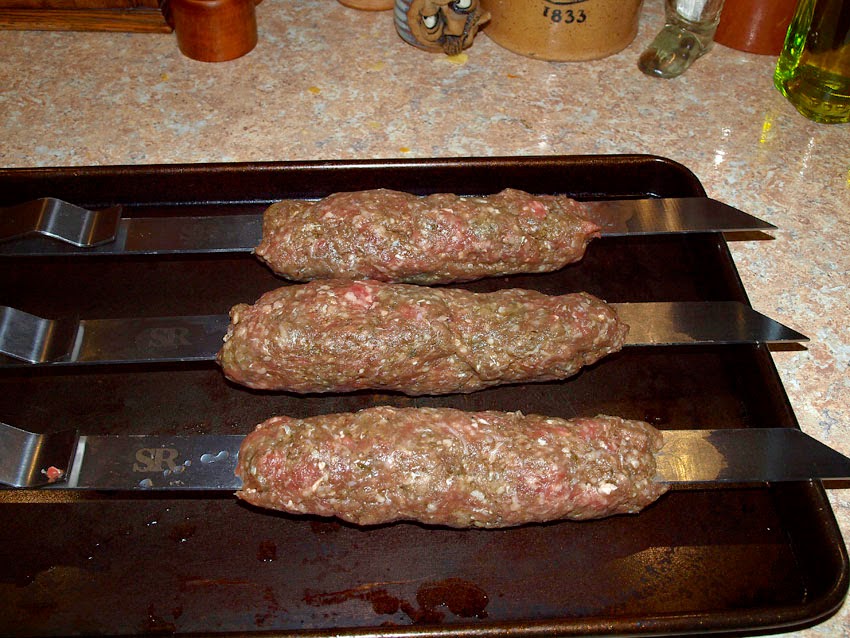 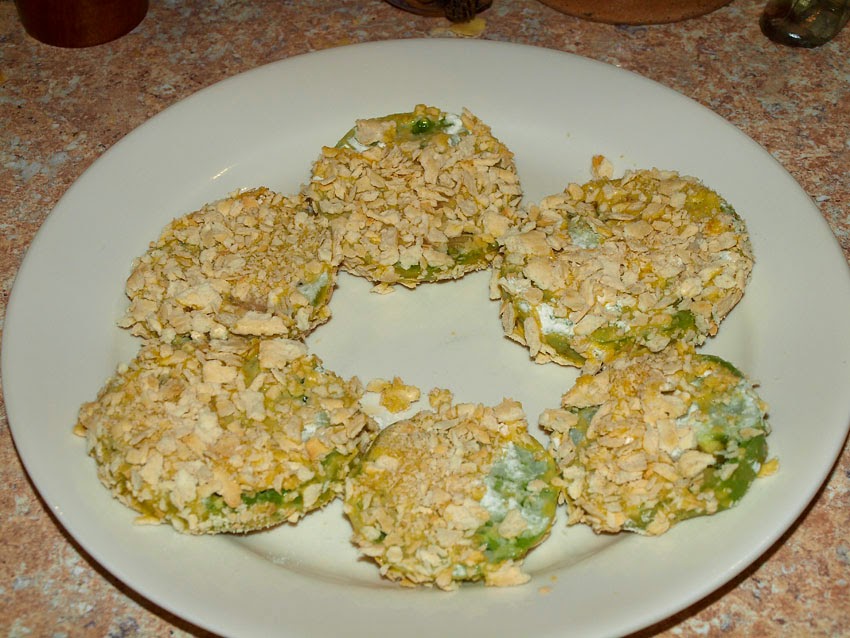 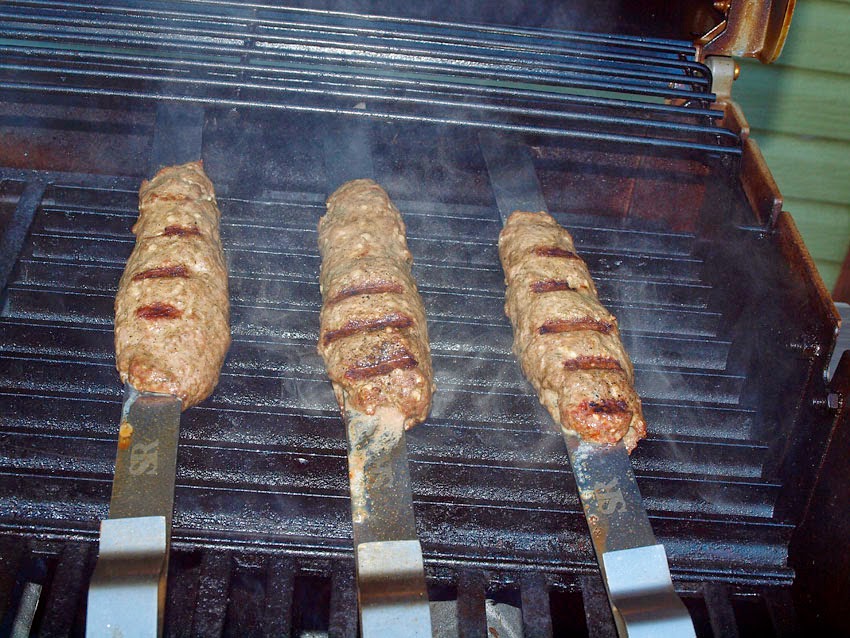 In the smoker to hold 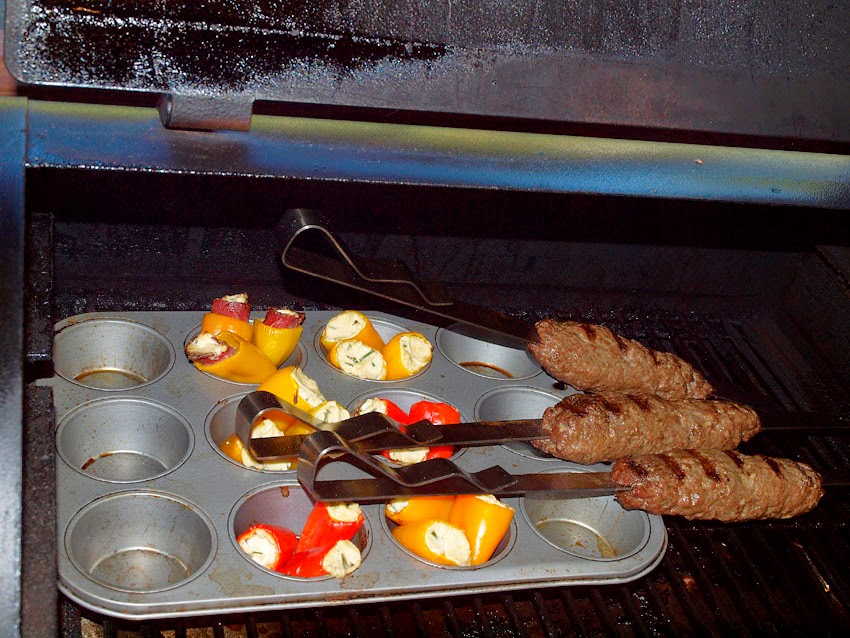 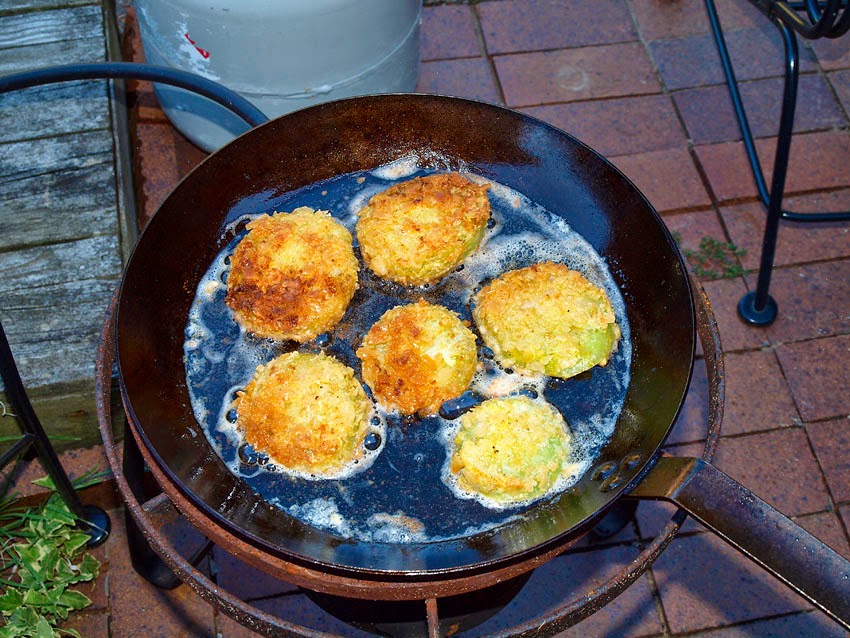 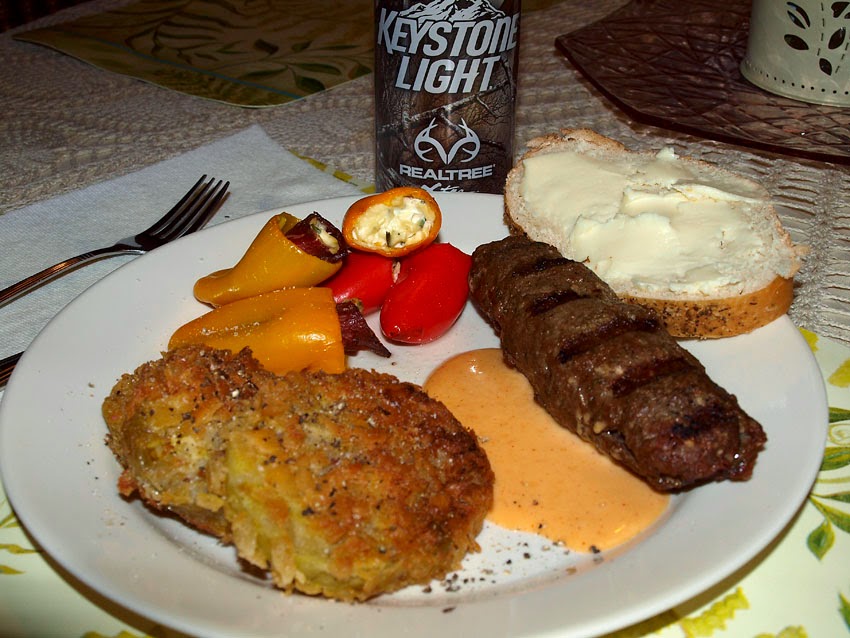