A little late getting this posted; I had a large limb come down from my pear tree so was busy getting that cleaned up.

Saturday I had planned to do Mongolian beef in my Wok outdoors on my gas burner. By late afternoon I changed to doing it indoors. There were too many rain cells coming up from the SW.

I used a recipe from Food Network since it was using deep fried stir fry rice noodles. I am not sure they ever tried the recipe; it called for using cooked noodles and I did not want to try to deep fry wet noodles. I used to deep fry cellophane noodles for a Chinese Chicken salad and know they puffed up as soon as they hit the hot oil. They added some nice crispness to the salad.

I added some snow pea pods and sliced carrots to the recipe and added Hoisin sauce and more soy sauce to the sauce mix. I would have liked some crushed red pepper too but knew the wife would not like it. I had never used a wok on my glass top stove; my wok has a small flat in the bottom but did not want to scratch the top moving the wok while stirring. I used the ring and was not sure how it would work but it worked great on med. high.

It also called for the marinated beef to be deep fried for about 4 minutes to get browned up. I decided to do the deep frying in a large sauce pan instead of the wok so I didn’t have to pour off the oil after deep frying. That didn’t work out so great, as soon as I had the noodles done the oil temp climbed too high so set off the burner and let the stove top cool down. As soon as I got the oil back to 360 deg. I put the meat in it cooled too much and didn’t recover fast enough to brown the meat. I removed it after 3 ½ minutes to drain and would let brown up in the wok before adding the sauce.

There are a lot of cooking methods for Mongolian beef but typically doing in a wok I think is best. It usually calls for flank steak sliced thin on a bias. I had two thin rib eye steaks to use. I cut most of the fat off and sliced it up. It turned out nice and very tender.

The stir fry rice noodles I use are Thai Kitchen brand and come in 2 oz. packs; about 4X5X1 1/2 inches. One pack is just enough for two serving deep fried or cooked normally.  I used a 3 quart sauce pan to deep fry and broke the nest in half. I dropped both into the oil and instantly they filled the whole pan; so use a pan deep enough if you use that method. Have tongs handy to remove to a paper towel lined bowl.

I hope I can do this again soon outdoors and use the wok for the deep frying and stir frying. The wife and I both loved this dish; the beef and veggies were great over the crispy noodles. We had some vinegar, oil and garlic marinated tomatoes, cucumbers and onions for a side. 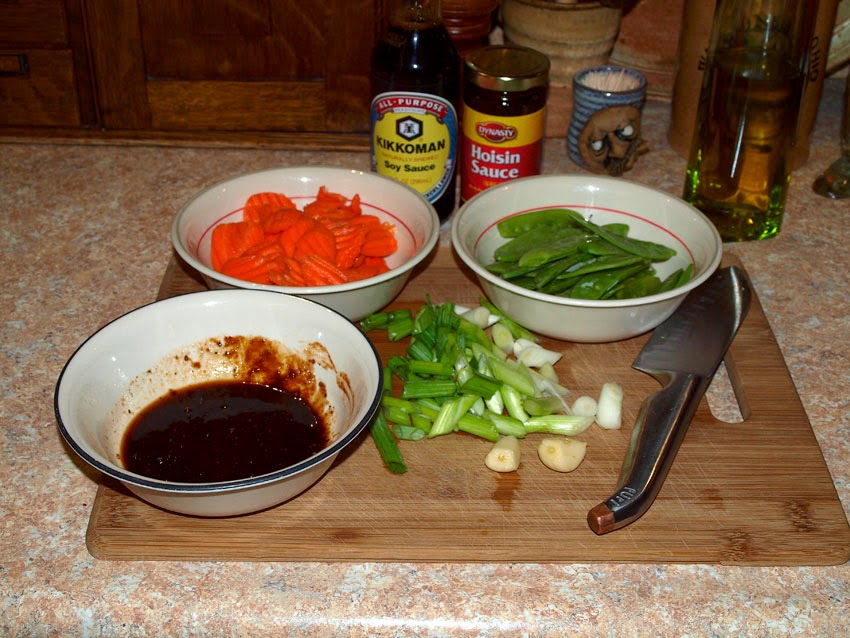 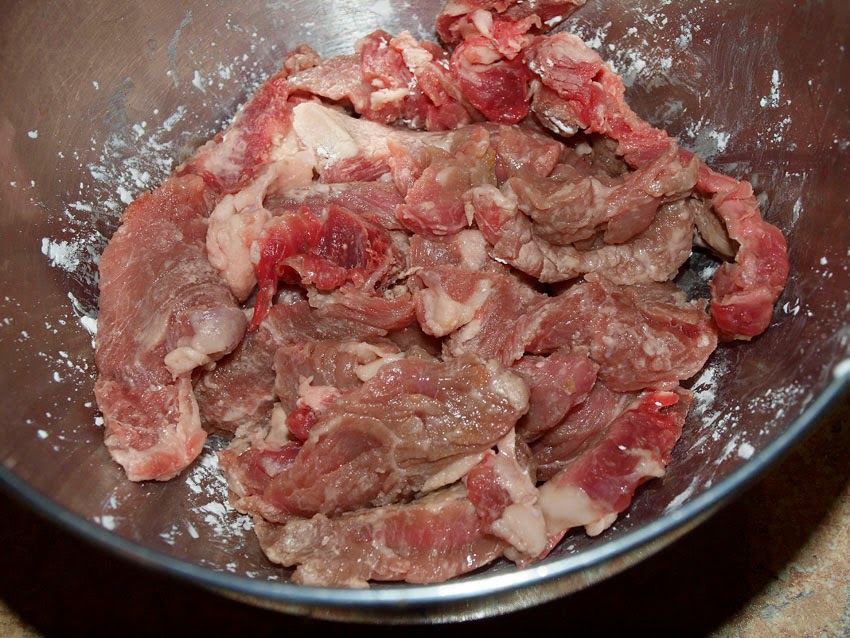 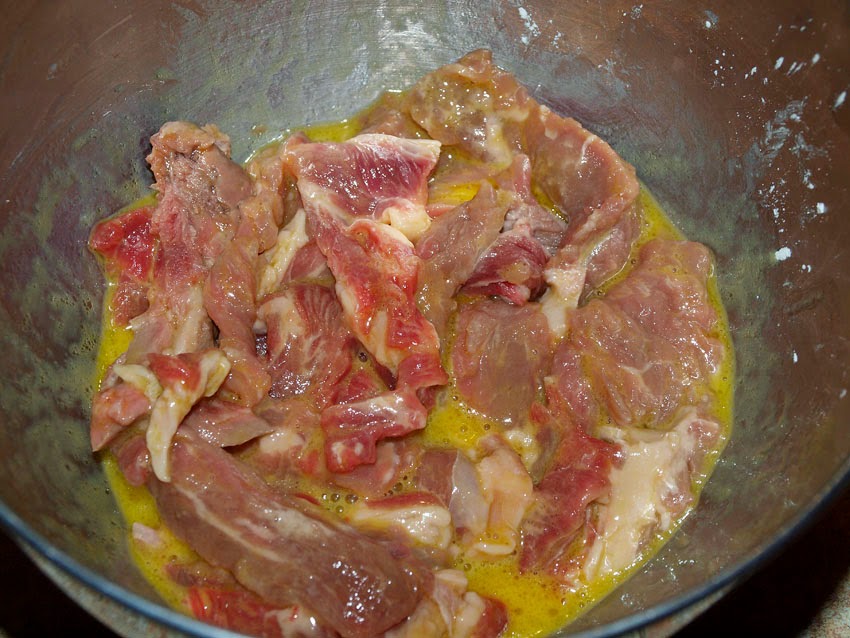 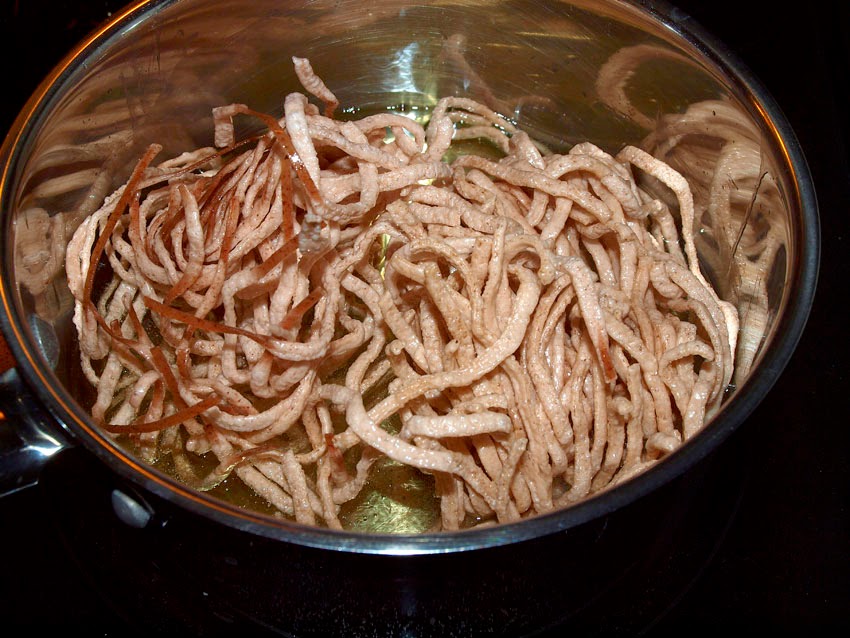 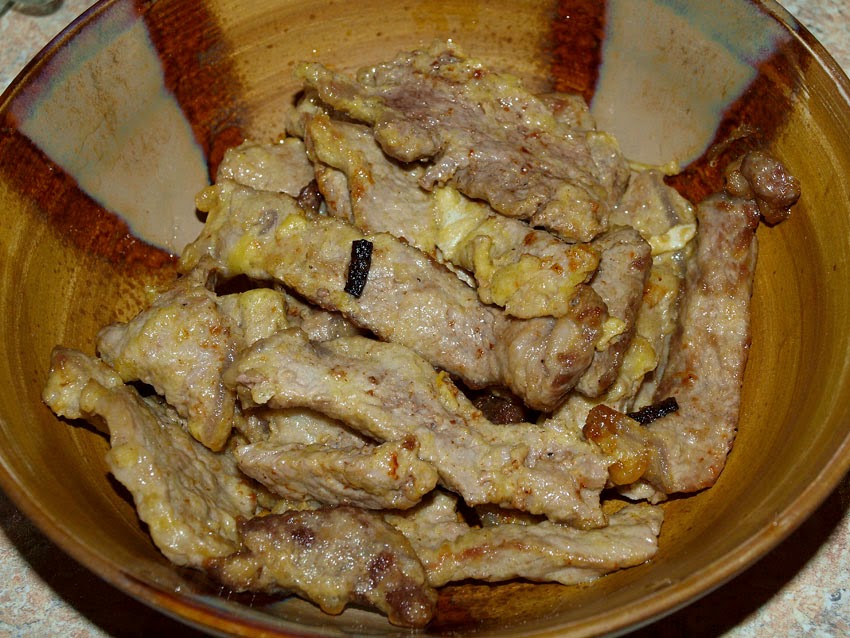 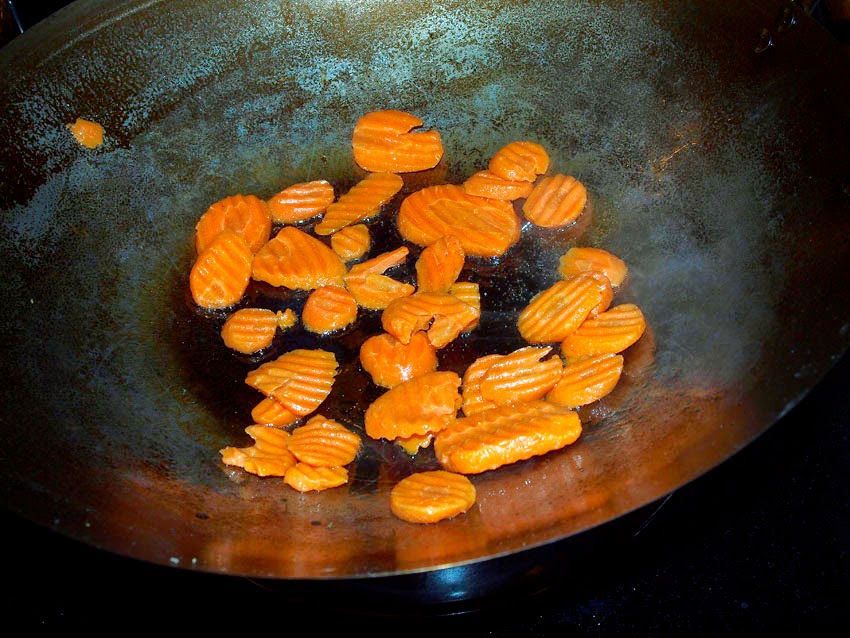 Snow pea pods in, remove to brown beef some more 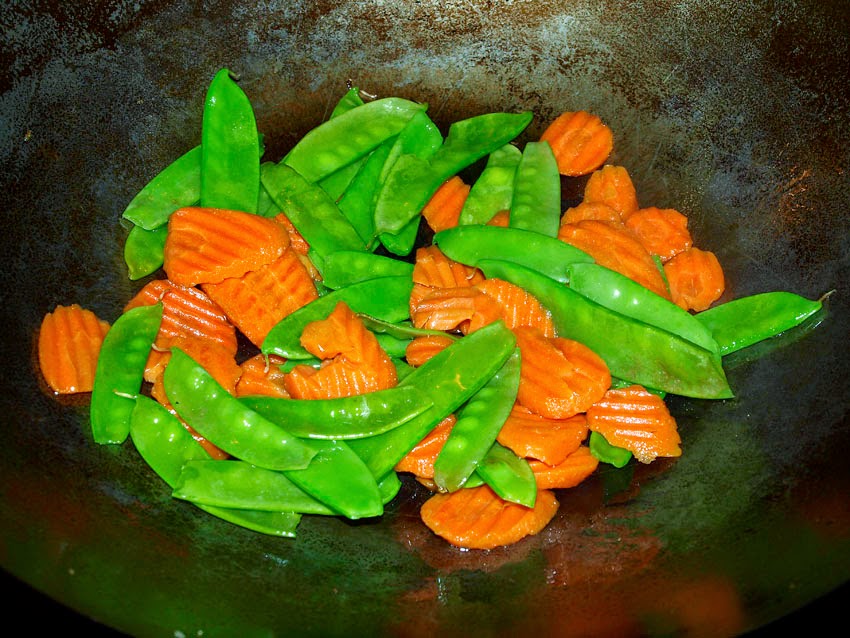 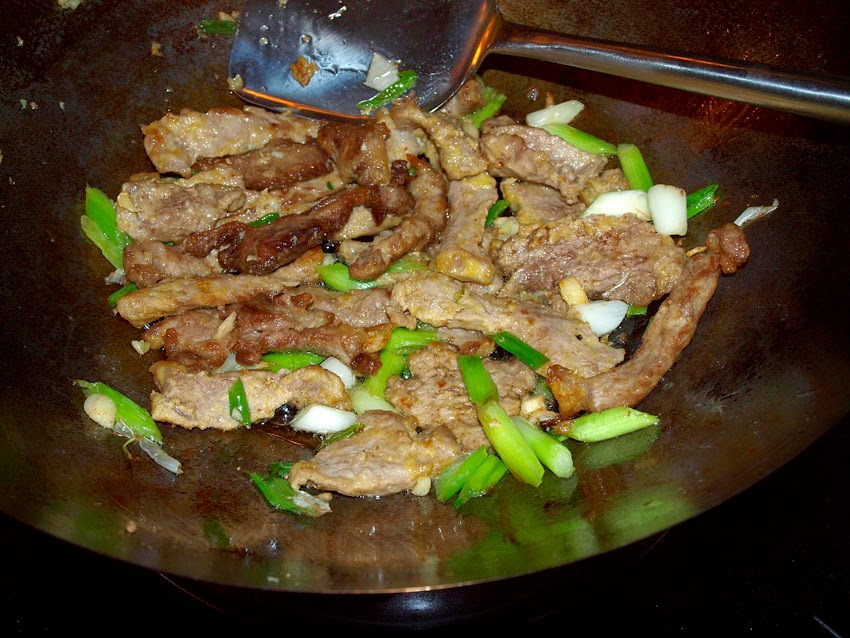 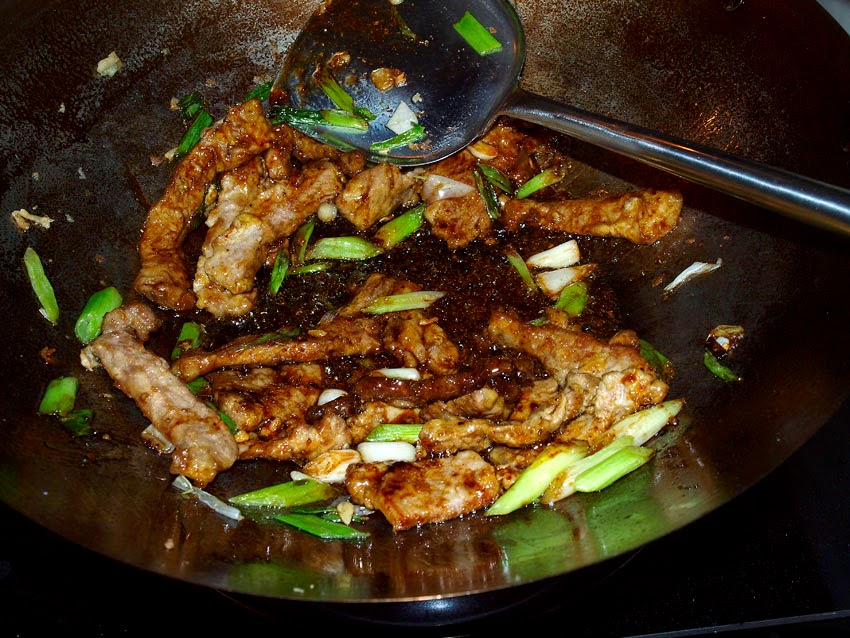 Veggies added and ready to serve 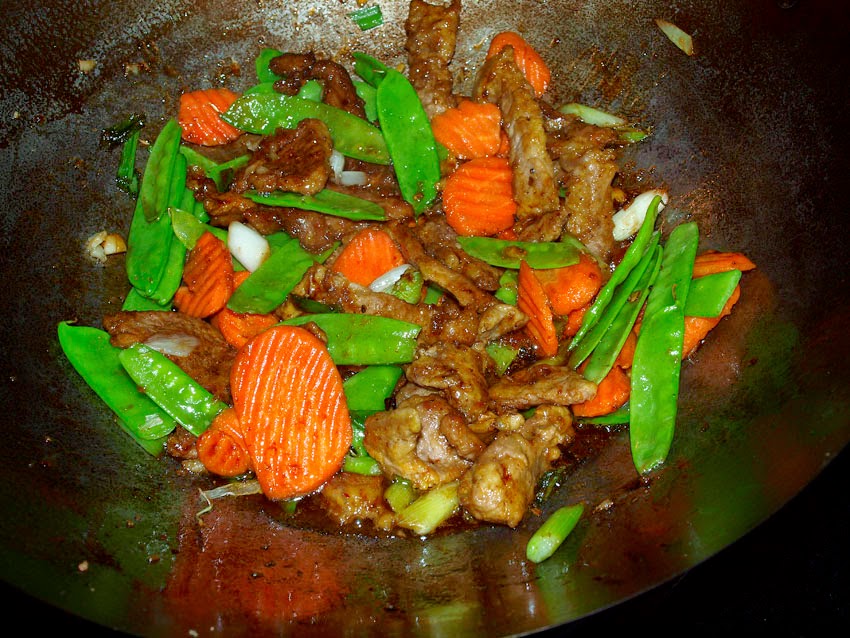 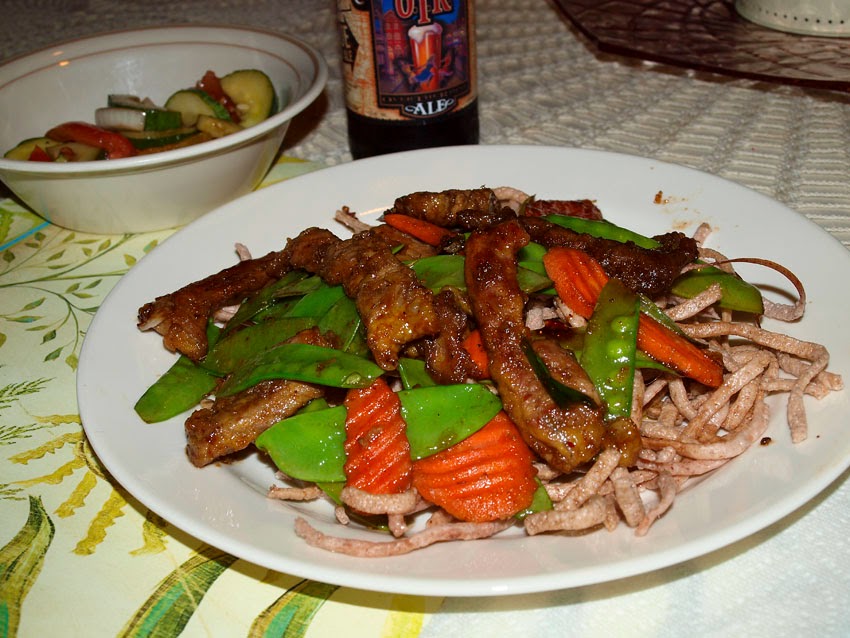