I had some grits with green onions from last night’s supper and I had some good bacon. I knew my lunch today would be bacon eggs and a fried grit cake. I don’t do it often but love the egg fried and basted in the bacon grease, the grit cake would be good in it too. I had a piece of cheese garlic bread with it. I tried to flip the grit cake too soon and it broke apart but I got the second side browned well The egg was just like Mom used to fix, some crisp brown around the side and basted with the bacon grease until the yolk is nice and white on top.

I have never been able to make and fry grit cakes; we called them fried mush, like Mom did. She made her own mush, cooked the cornmeal down just right, and cooled in a loaf pan in the fridge. When she fried the mush she sliced it about ¼ inches thick and got it nice and crispy. She didn’t always use bacon grease to fry it sometimes she did it in butter. I liked it with a little butter and salt and pepper on top. A lot of people like maple syrup on their much; it’s good that way but I prefer the butte, salt and pepper.

I think Mom’s secret was she cooked it slow and long enough to get a lot of the water out. It is tricky to fry since it will pop a lot if there is too much water in it. I find if you coat it with a little flour it will fry better and it needs 5 to 6 minutes at med low on each side . Over the years I made a lot of mush but anymore I buy it in round tubes at the grocery. The Yoder’s brand I get here is pretty good and fries up nice. 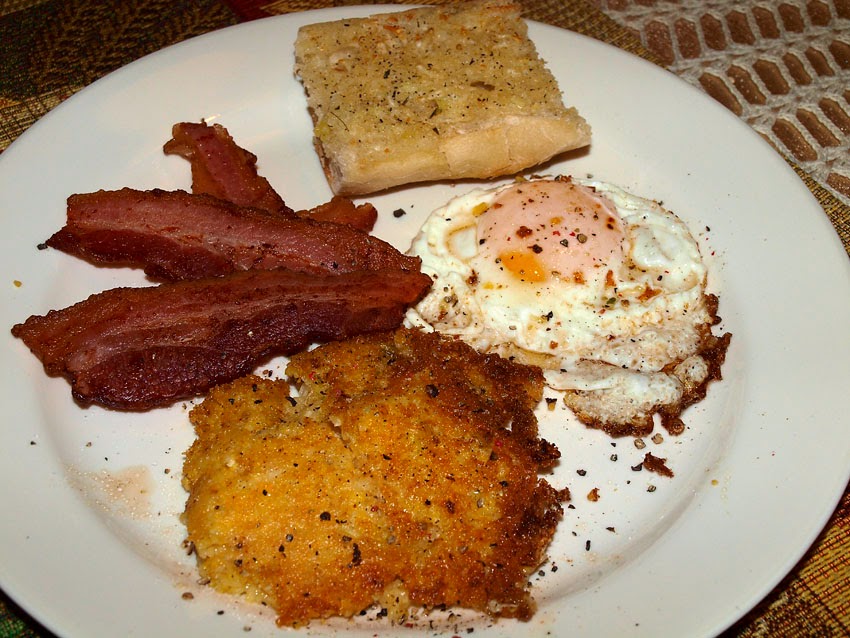