Brats in a Blanket and Haluski

Today I felt good enough to cook. I was getting tired of eating my wife’s cooking, carry ins; and ready for some home cooked food. I have seen recipes lately for brats wrapped in refrigerated crescent roll dough. They looked good and I was hungry for some haluski, fried cabbage and noodles that would be good with them.

Most of the brat recipes called for some mustard and sauerkraut in the brat roll. I used a tube of Pillsbury’s roll that was 8 rolls in triangles. I used two of them for each brat; folded together then rolled into a rectangle. It’s best to roll them out a little larger and then cut into nice rectangles. On one half of the dough was a layer of mustard and about a TBS. of sauerkraut; then lay the brat over. In the other half make about 5 cuts and fold strips over the brats. Wet both sides that will go together when folding the strips over the brat to seal well. If you want to get fancy you can cut thinner strips and crisscross for a braded look. Then you bake them in a preheated 375 deg. oven for 15 to 20 minutes until browned some.

If you use fresh brats you will have to cook them first. I used four green onion brats from my butcher and smoked them on my smoker. They were on smoke mode, 200 deg. grill level for 45 minutes then eased up until a grill level temp of 325 deg.  They were up to 155 deg. after a total of 1 and ¼ hours. I let them cool some then in the fridge until time to cook.

For my haluski I used 8 oz. of kluski noodles, ½ head of cabbage sliced like slaw, 3 slices sweet onions diced, a clove of garlic minced, salt and pepper. I did it all in a little olive oil and butter. At the end I added a cup of sweat peas. I would have liked to fry up some bacon, use the grease and add in the bacon later but I figured the daughter in law and grandson might stay for supper tonight so I didn’t use bacon.

It took me awhile to make up the brats in the dough, me and rolling dough does not do well. I had the oven heating up and the water on for the noodles. When the water was boiling I added the noodles then sautéed the onions and garlic in a skillet on med. heat until just getting brown, added in the cabbage and cooked about 10 minutes then added in the drained noodles, I only used about ¾ of the noodles.
I checked the brats and looked like another 5 minutes so I added the cup of peas to the haluski.

We all liked it but needed a little more cabbage and we agreed it was better if the cabbage was cut in 1 inch squares like I usually do instead of shredded. Our veggie daughter in law ate a half a brat and liked it and she liked my dilly green tomato salsa too. I had it and some mustard to dip the brat roll in. 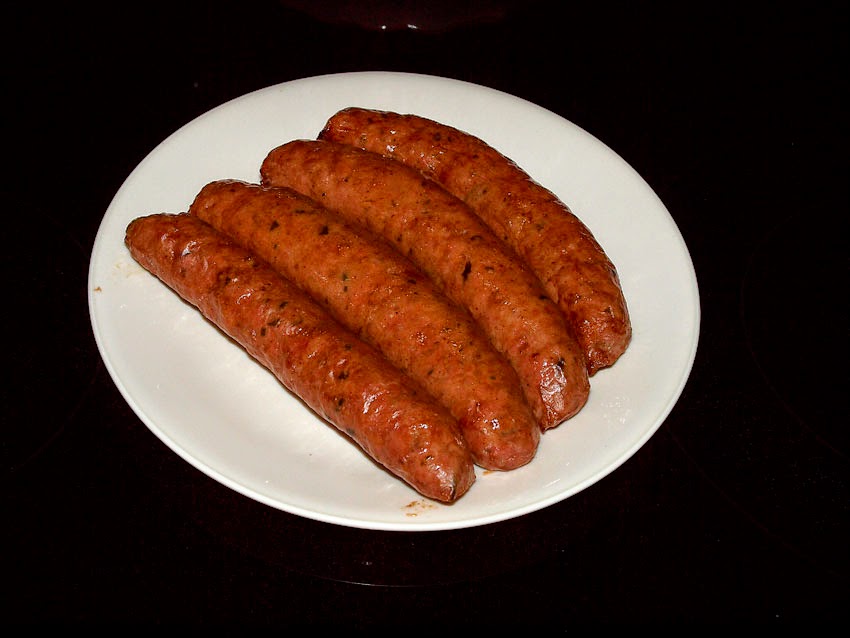 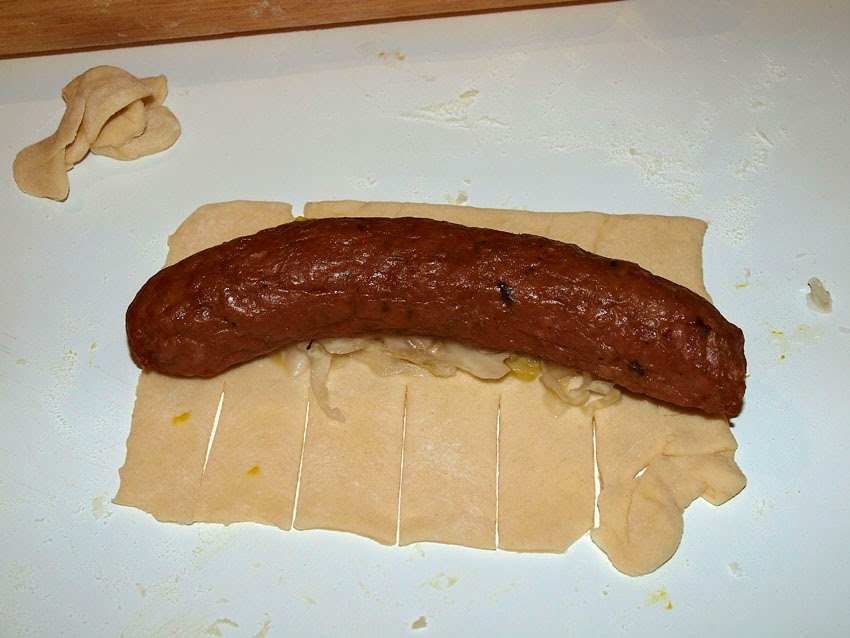 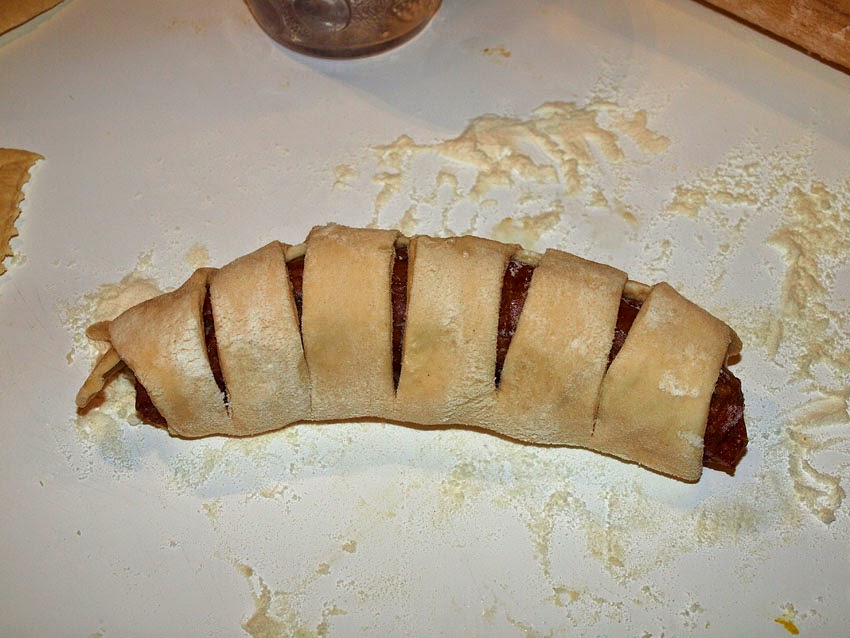 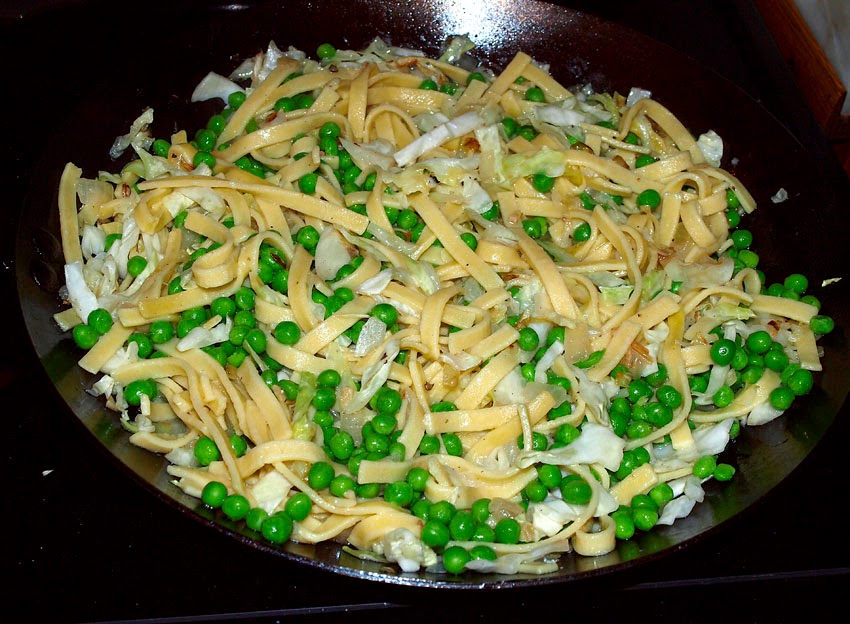 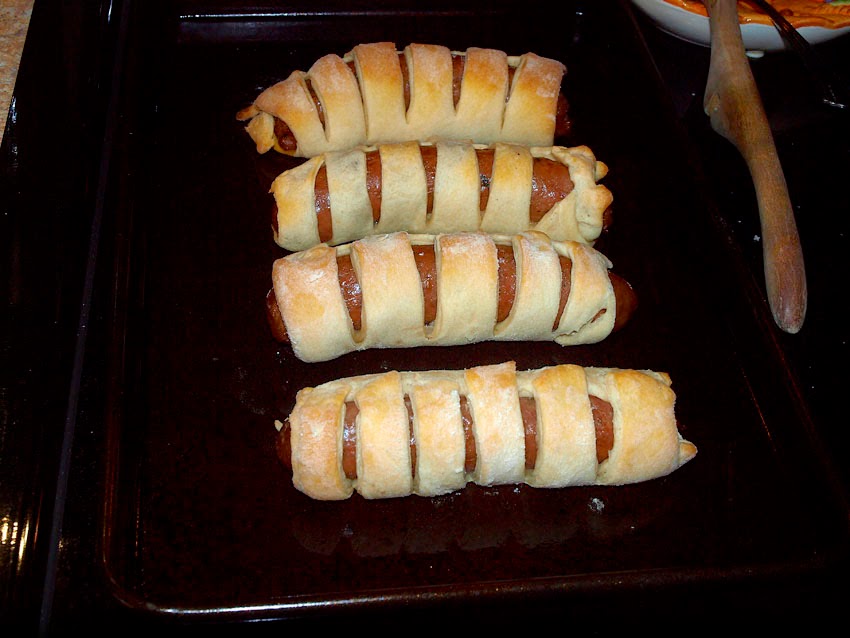 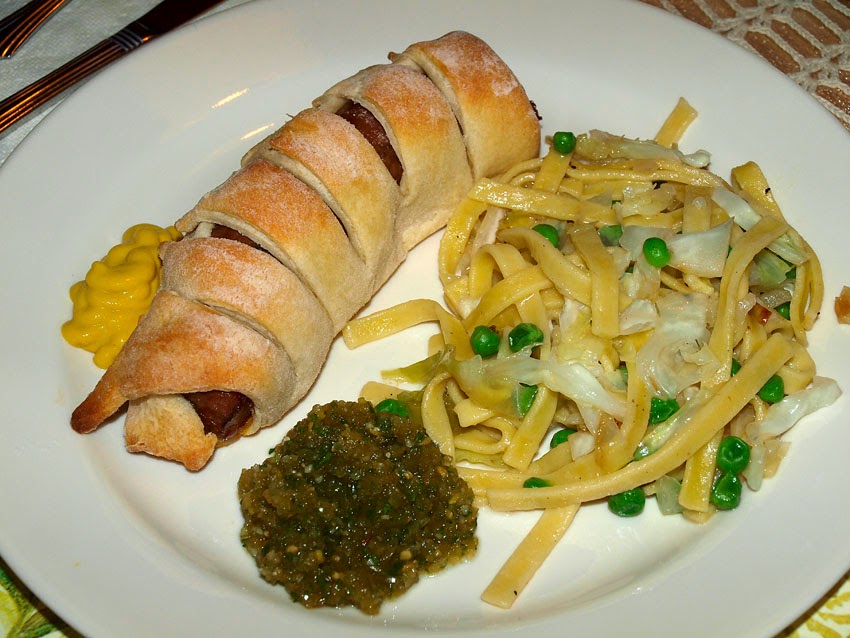