It was not a good year for my tomatoes. July and August was way too cool. The last week of August and the first week of Sept. we are just now getting hot summer weather and the tomatoes I had out came on all at once. I had six plants out, a beef steak, two early girl, two better boys and a plum.

I picked all the ripe ones yesterday and picked enough green ones to do some green tomato pickles. My recipe was for 2 lbs. of small green tomatoes. I had about 1 ½ lbs. and just right for my 1.5 liter Fido jar. Fido jars have a rubber gasket and a clamp lid. They are popular for fermenting; the gasket is supposed to let gas out but not air in.

Recipe came from a free E-book at Cultures for Health

Instructions
1. Prepare brine by warming up 2 cups of water, adding salt and stirring to dissolve, then adding 1 cup of cold water to bring brine to room temperature.

2. In a quart jar add coriander or dill seed, garlic cloves, and hot pepper. Fill jar with green tomatoes, leaving about 1-1/2 inches of headspace. Pour brine over all, just covering the tomatoes and leaving the headspace.
3. Cover jar with lid and airlock, if using. Allow to ferment in a room temperature space for 3 to 12 days. If you are not using an airlock, be sure to burp your jar regularly for the first few days of fermentation.
Once tomatoes are fermented, move them to cold storage.

Note: I just used about a half of a jalapeno and two large cloves of smashed garlic. I used about half dill seeds and half coriander seeds. I also added two fresh dill fronds.

After fermenting they should keep at least 3 to 4 months in the fridge. If you want to store longer you will have to use canning jars and do a water bath after they ferment but you will lose the benefits of the natural lacto acid.  With canning jars you will also have to burp them, loosen the lids to let the gas escape, the first few days of fermenting. 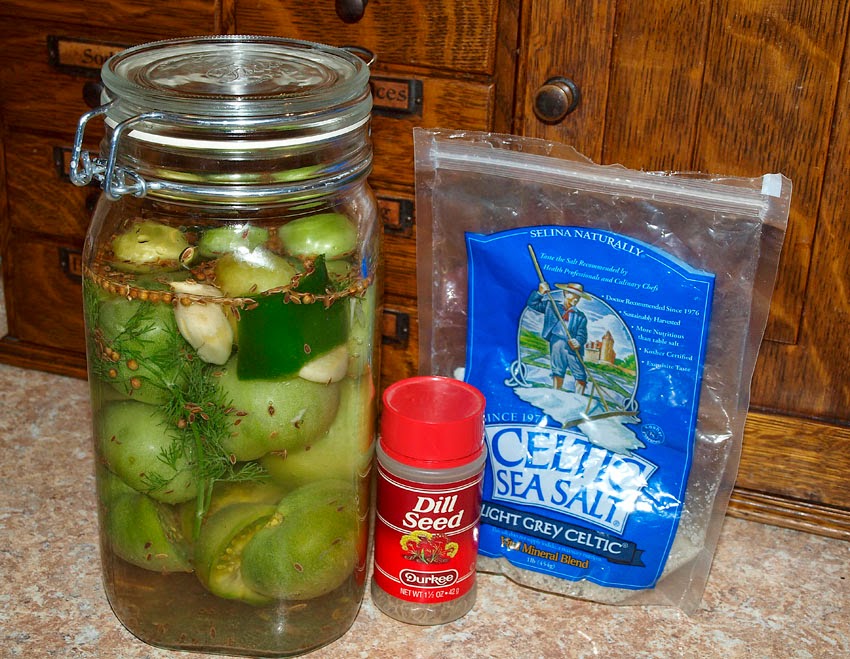