Poutine is a national dish of Canada started in the late 50’s in Quebec. It is sold by all the major fast food places there besides pubs and poutine stands.  It is basically French fries and cheese curds with light gravy poured over. I first started making it several years ago and tried several recipes for the gravy. There are a lot of different recipes for it and other toppings to add. I love the stuff!

At our LTBBQ Ohio gathering this year Scally was making some with jerk chicken and using his favorite canned gravy St. Hubert’s. I wasn’t staying for the night he fixed it so he gave two cans of it. I can’t get fresh cheese curds here so don’t get the crunch they have. Scally said they like it better with shredded mozzarella because it melts for a nice gooey cheese. The cheese curds do not melt much. I made a batch using his gravy and mozzarella and we liked it that way too. I still have a can left for later.

My favorite gravy is country style and had an idea to use it in poutine. Most of the time I use Pioneer Brand Country Gravy mix instead of from scratch. It is so easy and to me as good as from scratch. I had some Ore Ida fast food fries to use and some of my pulled pork thawed for our supper tonight. For the cheese I had some shredded mozzarella and 4 state cheddar.

After preheating the oven for the fries took less than 30 minutes to prepare and serve. I had mine with the fries, some pulled pork and both cheeses then poured plenty of gravy over all. I topped with more of the cheddar and some fresh ground pepper. You can’t get much faster and easier for a delicious meal. 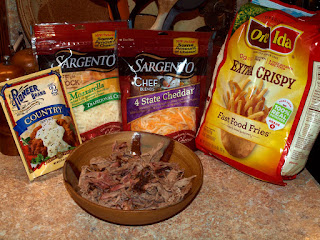 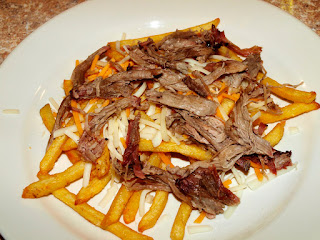 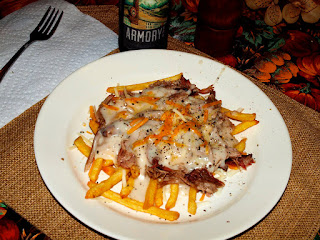 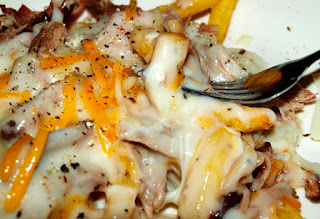 Email ThisBlogThis!Share to TwitterShare to FacebookShare to Pinterest
Labels: Poutine