I very seldom buy any meat from Walmart since my butcher is so close by; he doesn’t have beef rib racks out very often. When I saw some at Walmart they didn’t look bad but had a 2% solution added. I was hungry for them so bought a pack. I had some Ore Ida fast food fries left and some Romaine so I did them on my Weber Spirit when the ribs were about done.

I rinsed the ribs well and dried then added a little Penzey’s BBQ 3000. I had some Stubbs beef marinade to mop them with. I heated the Traeger to 190 deg. and got the ribs on at 1:15; I planned to get them done by 6:00. After a half hour I eased it up to get 235 deg. at grill level for the rest of the cook. An hour & half in I mopped with the Stubbs.

At 3:30 I double wrapped in foil along with about 2 oz. of the marinade and two pats of butter for each pack. At 5:00 I unwrapped and placed back on the grill. I checked temp with my thermopen and had 185 to 190 deg.

At 5:40 I got my fires on the Weber at 400 deg. for 20 minutes and grilled the Romaine I had drizzled some olive oil and balsamic vinegar. I placed them cut side down for a couple minutes then turned and added some parmesan for another 2 minutes.

I 5:45 I had pulled the ribs to take inside and rest. I was not prepared for the temp drop I had; they were at 175-180 deg. I knew they were not done right but went with it. I should have left them wrapped and all might have been good.

They were a little tough but had good flavor. At least we got full! 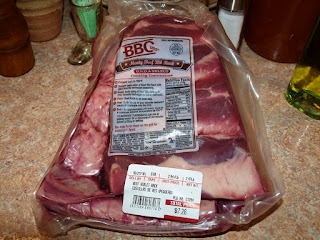 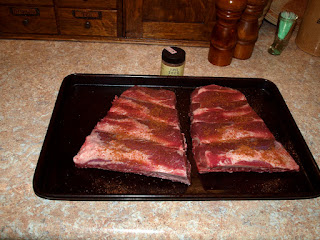 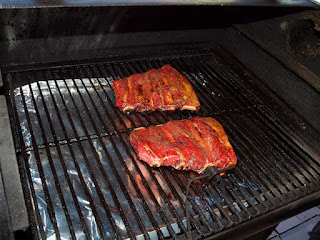 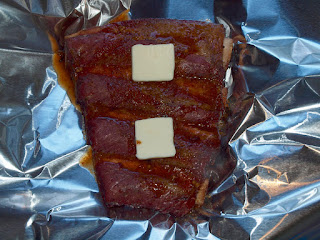 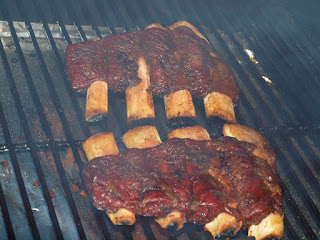 Sides on the Weber 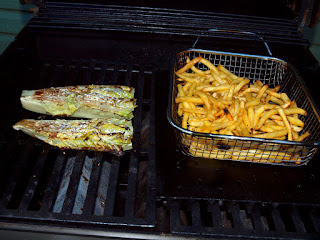 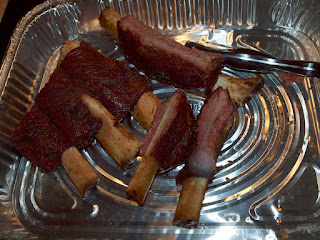 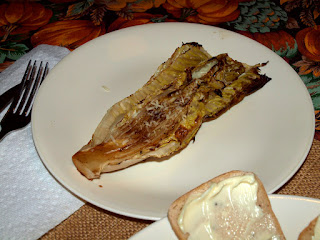 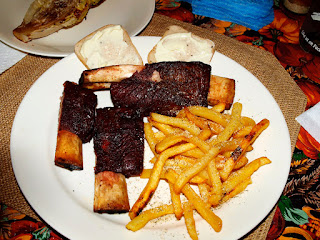