I love Cajun and Creole style foods but I can’t remember the last time I made Jambalaya. There are a lot of versions out there to try. It is usually made with seafood, chicken or pork; or any combination of these. The other common additions are onions, garlic, sweet peppers, celery, parsley, rice and some stock and that is usually chicken stock.

I found a recipe I liked from Chef John Folse, a well-known Louisiana Chef. It was for a chicken, pork and Andouille Jambalaya. My butcher just lately started making fresh Andouille sausage. It is probably not as hot as a Louisiana style but better than any store bought I can get around here; and it is fresh without all the preservatives.

I bought a package of chicken thighs; Miller Brothers Amish chicken from IN. I got 4 bone in CS ribs, pork butt, from my butcher. I had a pound of the Andouille froze that I forgot to thaw out. I decided to smoke all the meat first for the Jambalaya to give it a flavor boost.

Wednesday before I did chicken stacks for supper I smoked the meat for my Jambalaya. I seasoned the CS ribs and chicken thighs with some Penzey’s Cajun seasoning. I got them along with the frozen Andouille on the Traeger at 195 deg. for an hour and then went to 225 the last hour. The Andouille was done in about 1 ½ hours and the chicken and pork went to 2 hours. After cooling they all went in plastic bags and in the fridge overnight.

My wife went on a bus trip today so it was just me and the dog! After lunch I went through Sandman’s carry out and got some good beer! You need beer to cook!  I put a heaping cup of Uncle Ben’s rice in my rice cooker to use; when it was done it went in the fridge. I cut up the Andouille, pork and chicken. I removed the skin from 3 of the breasts and nuked it in the microwave until crisp to add it too. I just used two of the CS ribs and some flap meat from ribs I had cooked for the pork.

I wanted to reduce the recipe to about ¾ so I made some adjustments. I cooked it in my 5 quart CI Dutch oven on my glass top stove. By the time I had the rice done and the meat prepped it was 2:30 and time for my daily call to my 94 yr. old mother.

After I talked to Mom I prepped all my veggies and started to cook. First up was browning the pork in a ¼ cup of oil, I used grape seed oil, and then adding the chicken and Andouille sausage. I removed most of the grease and then started adding the veggies and cooking per recipe.

I think it was about 6:30 when I finished and had a big bowl of the Jambalaya. I added some Cholula hot sauce and that was delicious if I do say so myself.

Next time I would cook 1 ½ cups of rice to use along with the quart of chicken stock I used; but then after the leftovers set in the fridge overnight the rice will soak up most of the liquid. 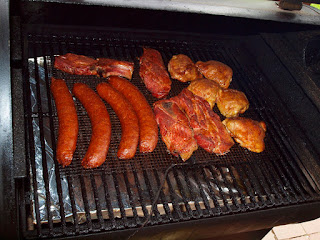 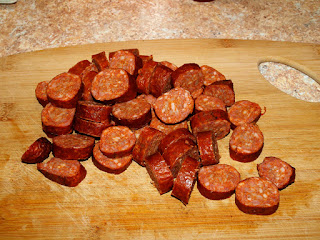 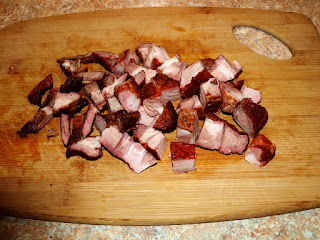 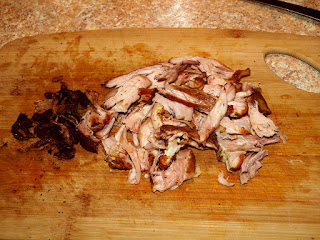 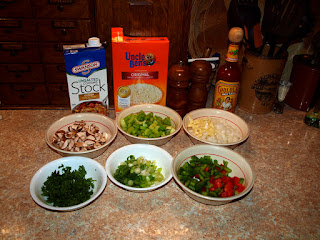 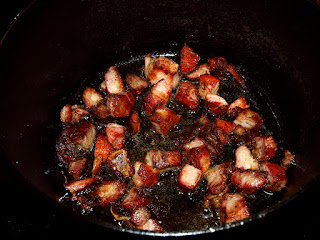 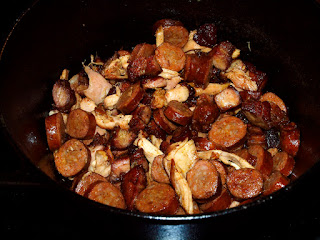 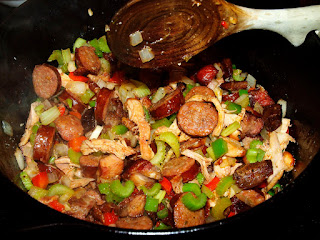 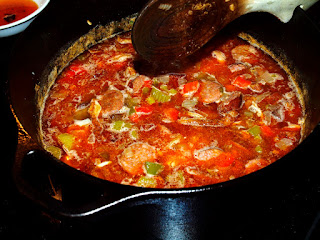 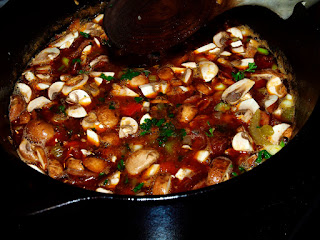 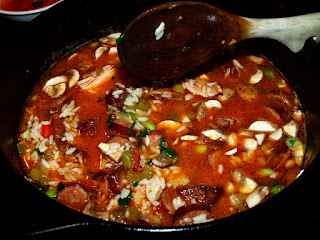 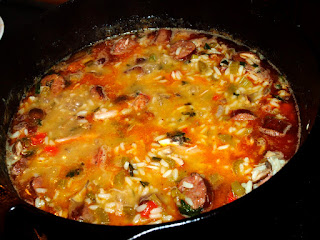 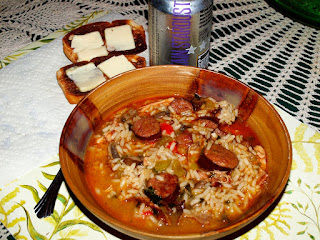 Email ThisBlogThis!Share to TwitterShare to FacebookShare to Pinterest
Labels: Cajun