I was anxious to cook tonight’s supper since it’s been last fall when I last used my wok. It’s kind of big and awkward to use on my stovetop so just use it outside on my Camp Chef gas burner.

I had a half chicken left from my Sunday cook I pulled off the bone and wanted to use the Yoshida marinade and sauce with. I also had some of the yellow rice left to use up. My stir fry was just by ear using what I had on hand; garlic, onions, celery, red pepper, green onions and water chestnuts.

It was a cooler 68 deg. today and a little windy but a nice day to cook out. I spent the afternoon out trimming grass and sprayed some weeds.

I had all my veggies prepped early to cook; 1 med. onion sliced, 2 cloves garlic smashed and minced, 3 celery stalks sliced on a bias, some red pepper diced, some sliced green onions and the sliced water chestnuts. One note on the onions, for stir fries I like to cut in half from the top then lay on the side to slice up. I had just over a half cup of the Yoshida sauce.

I got my wok heated up about 5:30 to cook. You can see my covered hibachi mad a good place for my tray of prepped food to cook. It was pretty windy so had a little trouble keeping a steady heat on the wok. I was using some Asian stir fry oil and first added the garlic, onions and celery. Then added the chicken and cooked a while, then the red peppers, and green onions.  I then added the Yoshida sauce and water chestnuts. After stirring to coat well I placed a lid on the wok to simmer 4 to 5 minutes.

For a stir fry you want your veggies to be crisp tender and not overcooked. Mine came out pretty good but as an afterthought some corn starch slurry to thicken the sauce might have been better.

My wife had hers on top of the warmed up yellow rice, I had mine on the side but ended up mixing it together to eat. The stir fry had enough flavor that plain white rice would have been good but I had leftovers to use. The Yoshida sauce was pretty sweet and for me I think it could use some sour and heat added. My wife thought it was good as it was.

I think the Yoshida sauce for me will be best as a cooking sauce for stir fries and skillet meals but would like to try it as a marinade on a skirt steak or flank steak. 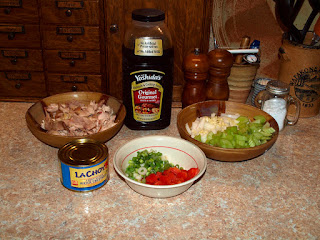 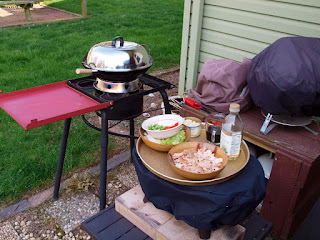 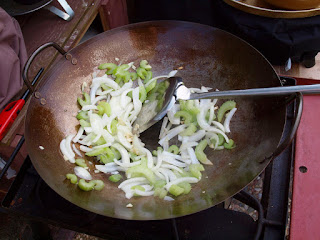 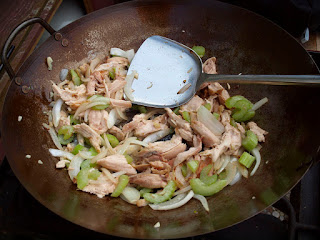 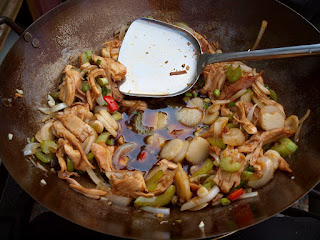 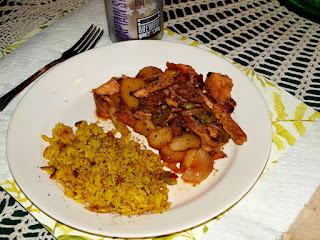