I had done some pastrami and had it sliced Thursday. I wanted it for supper but the grandson had a soccer game at 6:45 so we got carry ins and went to the game. We just about froze to death!

It was a great day today got up to 72! It was dampened a little because I had to mow grass! My wife likes her pastrami Reuben style and I found a recipe for Emeril’s favorite pastrami sandwich I wanted to try. I had just bought some Maille Dijon mustard that was great, a little hot and I got a jar of Saverne Artisan Kraut made with craft beer for the wife’s sandwich. I had some deli style rye bread to use.

I made some sour cream potato salad before lunch. I used about 2 pounds of small yellow potatoes, 3 big tablespoons of sour cream, 3 celery sticks sliced thin, 5 green onions sliced thin, salt, fresh ground pepper, and a few shakes of dill weed. I had trimmed the ends and any bad spots from the potatoes and steamed them in my rice cooker. When they cooled enough I sliced them about ¼ thick, added the sour cream and mixed to coat well then added the rest of the ingredients and stirred well.

This was the first time I had used my Weber Spirit since last fall so let it go to 500 deg. and cleaned the grates and grill grates. Then I turned it down to medium.

Emeril’s recipe was pretty simple; just add two tablespoons of stone ground mustard to 4 oz. of beer stir and bring to a boil, add 6 oz. pastrami and heat for 3 minutes. Serve on rye bread. I used 6 oz. of beer and two large tablespoons of my Maille Dijon mustard and added 8 oz. of pastrami.

I made up my wife’s sandwich first. I sprayed a little olive oil on the bread and toasted one side.  I sprayed the grill grates with olive oil and added 6 oz. of pastrami about 1 ½ minutes per side, added it to the toasted side of the bread, a slice of baby Swiss cheese and then toasted on each side to melt the cheese. I took it inside and added the kraut and got her served.

I had heated the beer & mustard inside while I was making the wife’s sandwich and took it out to the grill while I sprayed my bread with olive oil and toasted both sides. When the bread was toasted I made up my sandwich with a little more of the mustard.

We both enjoyed the sandwiches and thought the potato salad was good! I think I could have had 16 oz. of the pastrami on my sandwich! 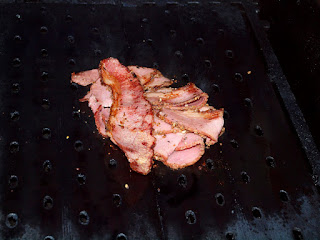 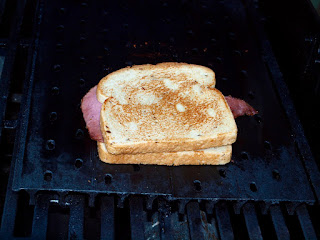 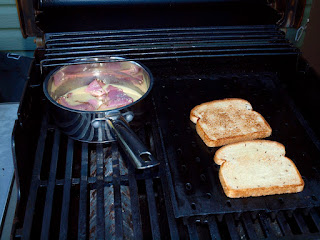 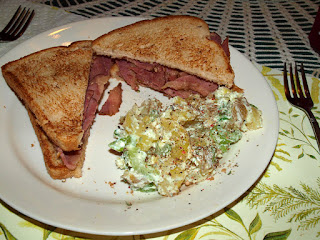 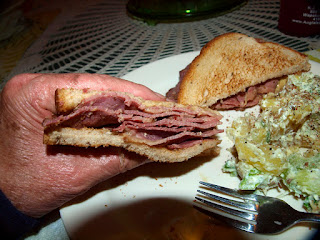