Back when I was on another forum there were a few that raved about Mr Yoshida’s marinade. I never could find it around here to try. I got to thinking about it and broke down and ordered some from Amazon. It wasn’t too costly; $14 for an 84 oz. jug. I searched in LTBBQ forum and looks like Smoker Pete is one of the few who have posted about it. He used it as a flavor added to brine and as a marinade.

I had bought the original marinade and cooking sauce. On Mr Yoshida’s site the only recipes were for using as a cooking sauce. I wanted to use it as a marinade for chicken. I split a fryer and got it in marinating by noon and it would be in the fridge 4 hours. I tasted the marinade and all I added was a teaspoon of Penzey’s toasted garlic.

It was a great day, our first short sleeve weather, at least for an old man! It was nice enough I rolled up the canvas on my smoke deck so my summer kitchen is now open! I had planned on trimming some grass but it was so nice I just sat and enjoyed the day with a few beers, some good music and cooked my supper.

I had some left over bread and for sides I would do our two favorite; Zatarain’s NOLA style yellow rice and some asparagus. I like using rice as a side with chicken; I can have it done in my rice cooker and on warm hold until the chicken is done.

I got the chicken out of the fridge at 4:00 and sprinkled some McCormick’s Montreal chicken seasoning. I heated up my Traeger and got the chicken on at 4:30 at 200 deg.; after 25 minutes eased it up until 300 deg. grill level. I got my rice in the cooker and made up the skillet of asparagus. One trimmed and washed bunch of asparagus went into an oiled 8 inch CI skillet, poured a couple pats of melted butter over, some Penzey’s Tuscan Sunset seasoning, a little salt, 3 thin slices of Brie cheese, some shredded mozzarella, and some shredded cheddar.

At 5:20 I went to 350 deg. grill level on the chicken. At 5:35 I added the skillet of asparagus to the smoker. It all was ready at 6:00; the chicken was at 174 deg. breast IT. I took it in and let rest while I melted the cheese on the asparagus some more under the broiler.

The chicken was great, some of the moistest I have had. It still did not have the flavor in the meat I expected; most of the skin was tough but I did eat some and that’s where the flavor was. The asparagus was exceptional I thought. The wife and I both liked the supper.

My thoughts are that for skin on whole, spatchcocked chicken, or split just a simple brine overnight and some good seasoning is the best way to go for a pellet smoker. It’s hard to get the marinade flavor into the meat. If you can get crispy bite through skin in your smoker or grill then marinated skin on chicken could be good. I think the next time I have a rainy day I will try the Mr Yoshida’s and make some kind of skillet chicken with skinless breasts or thighs. I like the flavor of the Mr Yoshida’s.

My Summer Kitchen is Open 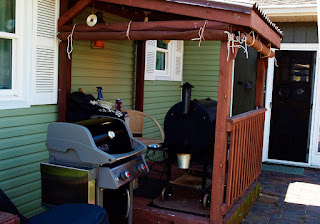 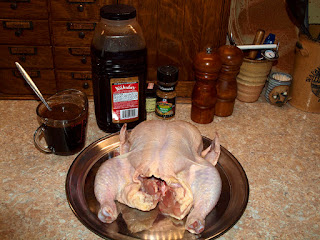 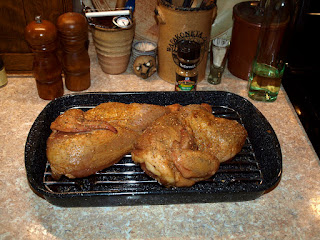 Asparagus ready for the smoker 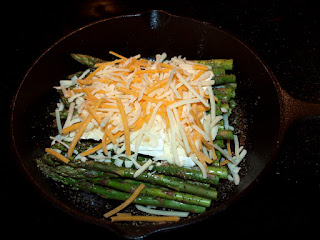 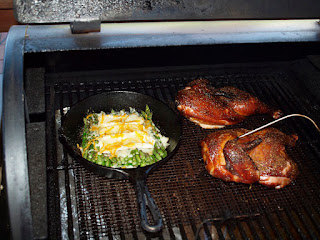 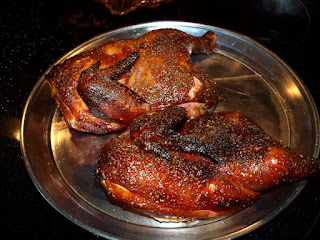 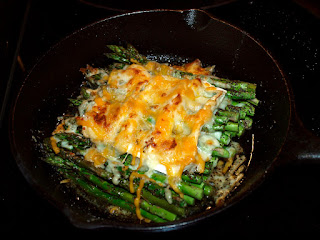 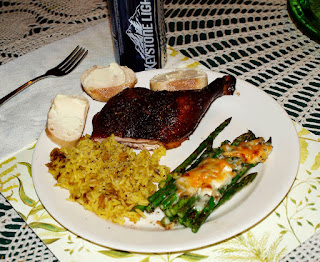