It was above 50 deg. today but kinda cool with the drizzle rain we had all day. It was a cook indoor day and I was anxious to try a new smashed potato recipe. I found it on Seasons and Supper and it was all done in a cast iron skillet. I thought some pork cutlets and asparagus would go well with it. We had not had asparagus in a while since our daughter didn’t like it but she has moved out and it is a favorite veggie for the wife and me.

I bought two nice sized pork cutlets at my butchers to use. The wife picked the grandson up from the bus since it was raining. When she came home he was with her, they had stopped at the Dairy Queen, the grandson had a hot dog and a frozen ice thing and the wife had an ice cream treat. Not sure but think the wife instigates the stopping at the Dairy Queen! I told the grandson I was fixing a good supper but if you eat that you won’t want to stay. He said he would stay and eat.  He called his Mom and she said she would come for supper after work.

There were plenty of the pork cutlets to share with the grandson and I knew the DIL would not want any. I cut them into smaller serving size pieces seasoned with salt and pepper; dredged in a little flour and fried in some lard. I had fried up some diced bacon for the potatoes, and sliced some green onions.

Everything was cooked in Lodge cast iron or carbon steel. You should be able to adapt to outdoor cooking.

I had everything ready, nuked the potatoes in the microwave and got them started in the skillet. I cut a cross in the top of the potatoes and they smash out better. Now this would make a pretty dish to serve if everyone wanted cheese, bacon, sour cream and green onions on their potatoes; but I knew the DIL did not want bacon and the grandson requested no cheese but bacon on his! So I added cheese and bacon to two, just cheese to two and just bacon to one!  I let everyone add their sour cream and green onions.

The asparagus I sautéed in some olive oil, salt and pepper then added some balsamic glaze. I just cooked it about 5 minutes for crisp tender.

That was pretty good; the DIL had a salad, some potatoes and asparagus. I was surprised the grandson ate two pieces of the pork, his potato and more of the asparagus than the rest of us after having his hot dog. Glad that boy likes asparagus and peas too! For me the potatoes are a go to recipe and would go well with about any entrée. 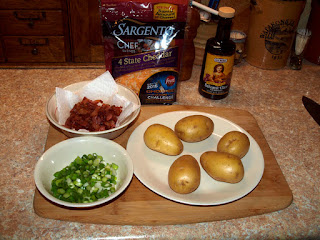 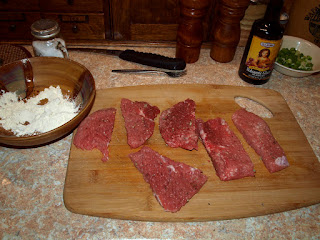 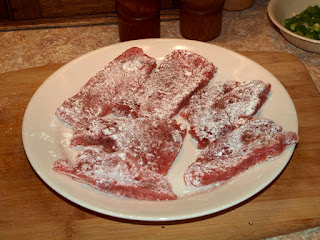 Potatoes nuked and ready for the oven 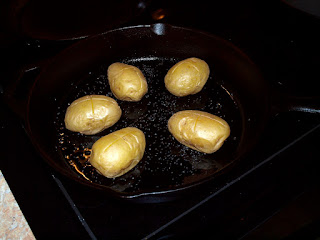 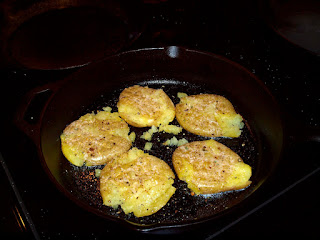 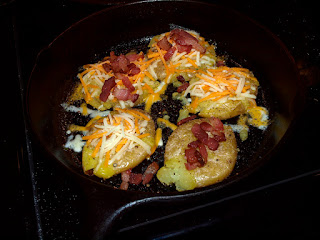 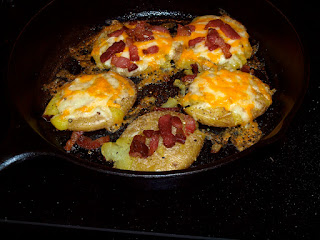 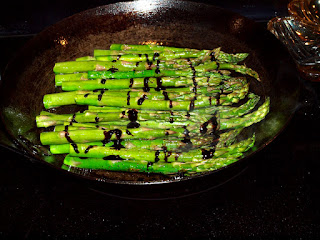 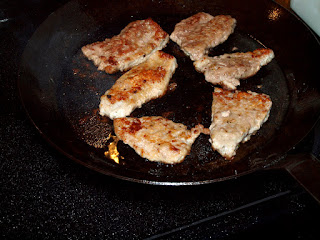 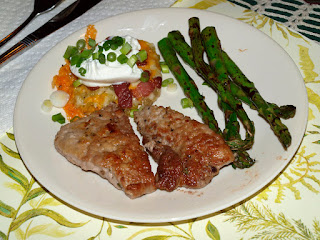