I first got the idea of using a muffin pan on my smoker from Myron Mixon; he used one to get a nice shape to his chicken thighs. I tried it and deboned and skinned the thighs then added the skin back on top and they turned out nice and uniform and they were good. I had drilled holes in a six hole muffin pan to get rid of the grease.

Even with the holes drilled in the bacon on the bottom never got crisp. I bought another 6 hole muffin pan and did some until I could remove from the pan and finish directly on the grill to brown the bacon. I also started using two slices of bacon crisscrossed in the pan.

I found that I could smoke at 250 deg. grill level for 40 to 45 minutes and they were set enough to remove from the pan and finish on the grates. I go to 300 deg. grill level and they are usually done in another 45 minutes. I have used thighs and breasts but prefer breasts marinated or brined, pounded to about ½ inch thickness. I have tried several different styles of stacks but I prefer my original of bacon, chicken breasts, red peppers and onions that I first made in Dec. 2011. You need good sweet onions like Vidalia or ones from Peru.  Thin sliced bacon will crisp up better.

For tonight’s stacks I used some of my butcher’s thick sliced bacon and his lemon garlic marinated chicken breasts. I added the bacon to the pan holes, a piece of chicken breast I had pounded to equal thickness, a slice of onion, a slice of red pepper topped with a piece of chicken, bacon crossed over and secured with a toothpick. I sprinkled over some Penzey’s sandwich sprinkle, an herb garlic salt. I did them at 250 deg. for 45 minutes and then removed from the pan to the grill and went to 300 deg. grill level.

Checking the temp they were done in another 40 minutes. I had doctored up some leftover sour cream potato salad with some chopped hard boiled eggs and mayonnaise for a side, microwaved some Bob Evens broccoli and cheese and toasted some English toast. Even though I used thick sliced bacon it browned up nice.

It sure tasted good and had the wife’s thumbs up too. I should do these more since they are easy and we both like them. If you never tried these you need too; the bacon chicken, red pepper and onion go well together.

Making up the stacks 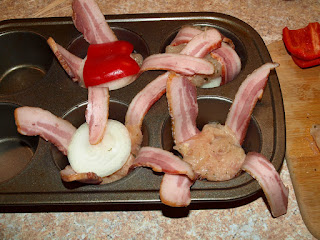 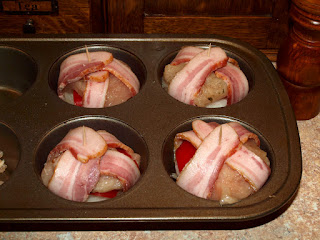 Ready to take out of the pan 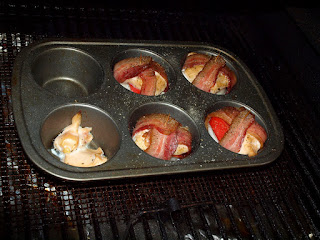 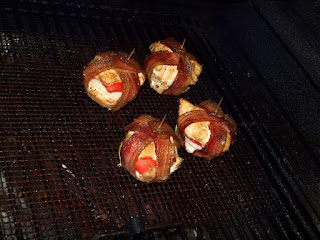 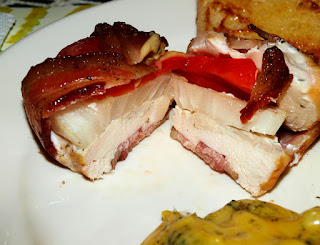 My wife sliced hers neater 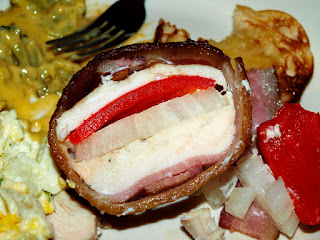 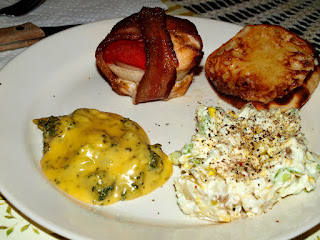