Hub is a moderator on LTBBQ forum; he is a very good BBQ cook and does a lot of judging at BBQ contests. He wrote up this method to make pastrami using a pre-corned beef flat. It saves that step and you can make some great pastrami in less time.

The past week-end one of the LTBBQ members found corned beef flats on sale for $2.99 a pound. I went to Krogers Monday morning to get one if they were on sale. They were $3.99 but I got one since I was hungry for pastrami. It was 2 .33 pounds and I probably should have bought two.

I got it soaking in a pot of water in the afternoon. It was in the fridge about 24 hours and I changed the water twice.  Tuesday afternoon I seasoned it well with the rub, double wrapped in plastic wrap and in the fridge overnight.

I had cleaned out my Traeger Tuesday and ran the auger out, empty, of pellets. This AM I had to refill the pellet bin and run until I got pellets dropping in the firepot. I then shut it down and replaced the heat shield, drip pan and grate.

It went in my microwave to set for about 45 minutes then took it out and let cool some and then in the fridge. I will slice it up tomorrow.

I just finished slicing the pastrami and it tasted great! I kick myself now for not doing two of them, I ended up getting about 1 ½ pounds from the 2.3 pounds. I froze up some for our son in law and we will probably eat the rest over the week-end. 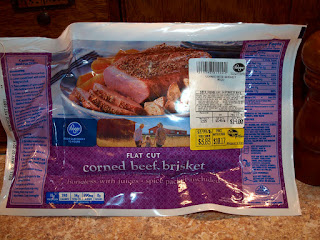 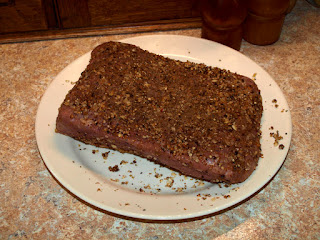 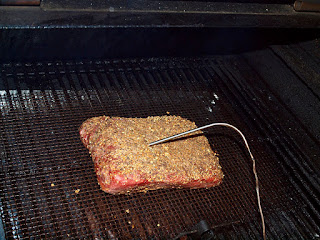 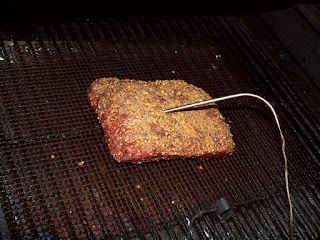 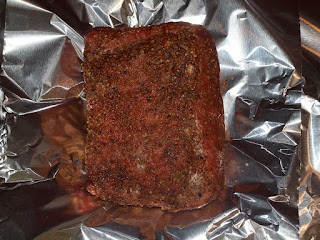 Ready to slice after a night in the fridge 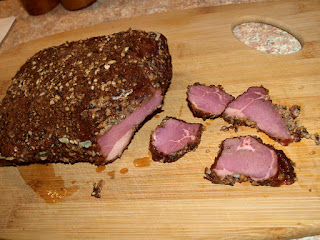 Slicing thin on my slicer 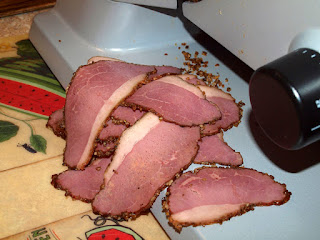 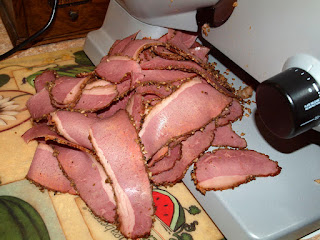 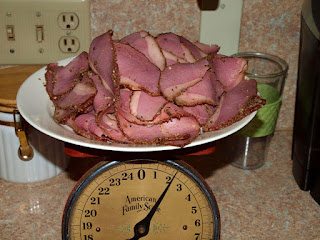 Email ThisBlogThis!Share to TwitterShare to FacebookShare to Pinterest
Labels: Pastrami