4 Years with My Traeger

I have been cooking for 4 years with my Traeger 07E and love that smoker! Before I had used gas water smokers for about 20 years. A pellet smoker is sure easy to use and a breeze to keep clean. I clean mine every few cooks, just vacuum out and change the foil on the drip pan; it only takes 10 to 15 minutes. Every spring I have just done a scrape down of the lid in side and barrel and about twice a year clean the exterior and give it a light coat of mineral oil.

I just gave the exterior a cleaning today and you can see it still looks pretty good for 4 years of year around use. The lid is just a little scorched at the bottom and a little paint has come off in the front from the cook being a little messy loading, unloading and dripping sauces down the front.

Traeger was the first pellet smoker on the market and was not without some getting used to. Like any smoker you have to know your pit, like what temp are you getting at grill level and does it heat evenly across the grate.

Mine came with the 180 controller that was made by Ortech. At first I had problems with large temperature swings. One trick a lot were using was adding firebricks to the bottom to act as a heat sink. This seemed to help but the main thing that helped me was learning to use the temp settings on the controller along with the P numbers; they are what controls the on off time of the auger feeding pellets in smoke mode and after the controller reaches set temp.

One big help was after I got my Maverick ET732 remote temp probes. It comes with two probes one for the grill temp and one for the food temp.  After I was able to know what my grill level temp was I improved my cooking. With my original 180 controller I was always about 25 deg. hotter at grill level than what the controller was reading with the right side of the pit being a little hotter than the left side.

I think it was in my second year my heat shield warped and would not set level in the pit. Some ¼ inch steel plate bolted to the bottom took out the warp and helped some by acting as a heat sink. I was using 5 firebricks in the bottom but now only use two, one on each side if the fire box. I think the firebricks may be a big help in colder climates but for our winter weather here in Ohio I don’t think they are really needed.

Another big improvement was to add a manual fan switch so I can run the fan after shutting down the smoker and finish burning any pellets left in the fire box. If you don’t burn those up you can get burn back in the auger tube and possibly setting fire to the pellets in the pellet bin. If you don’t have a manual fan switch on your Traeger always go to the smoke mode and let cool down some before shutting down; especially after a higher temp cook.

I did have an igniter burn out after a little over two years and it was replaced by Traeger free of charge. After the 3 year warranty was up I had some LED’s burn out on the controller and it was hard to read the correct temps. I wanted to buy a Savannah Stoker controller but have been waiting more than a year for those to come out and not sure they ever will.

I had read that Ortech had come out with a replacement that was supposed to be better than the Traeger 180 controller. I ordered one from Ortech and not happy with it. My grill level temps can run 25 to 50 deg. hotter than the controller reads. I have trouble now holding temps below 275 deg. At times I have better luck leaving it in smoke mode and using the P numbers to get the temp I want. I used the new RTD probe that came with the controller; it is very slow updating the temps and may try the old Traeger probe to see if that helps.

The bottom line is I love my Traeger, like any pellet smoker you can cook most anything on it. At lower temps it is a great smoker for low and slow BBQ. At higher temps it is a convection oven and anything you can do in your inside oven you can do on it. I do my cooking mostly at 350 deg. or below. I have done a lot of good burgers and steaks on it too.

There are a lot of new pellet smokers out there that are improved over the Traeger; better controllers for better control, some have better searing areas, and a little more safety features. Most of these will cost you $1000 and up. You can probably get a Traeger 070 for around $700 and the Traeger Junior at $300 is a good buy for cooking for two or to use camping or tailgating. If I had money to throw away I would have a new pellet smoker but I don’t so I will probably be happy using my Traeger the rest of my life.

If there are any Traeger owners that need help just send me an e-mail  and I will try to help the best I can! 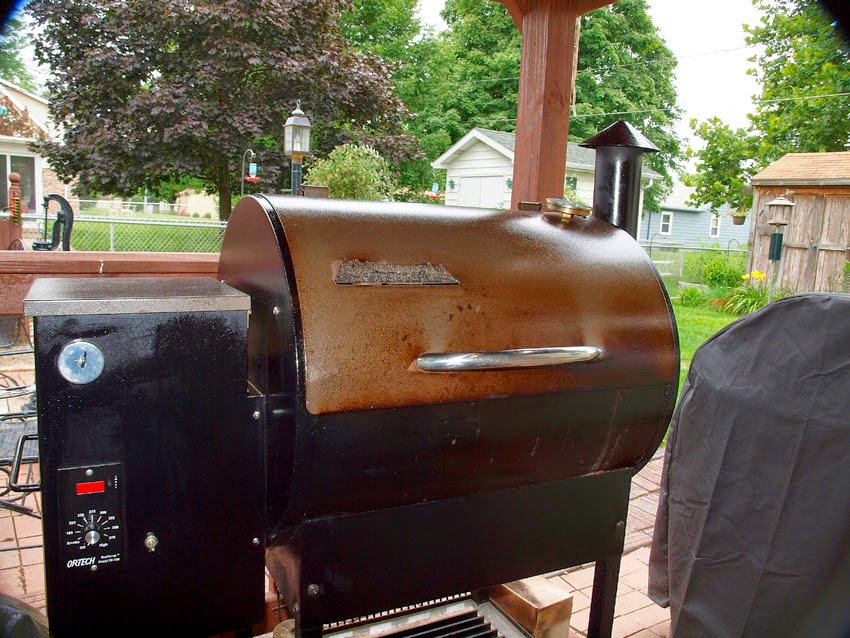