One meat I very seldom see around here are neck bones. The other day when I was at my butchers, Kah Meats, and I saw two bags of pork neck bones in his freezer I had to have a bag. The one I chose was 4.49 lbs. at .79 cents a pound!  Neck bones are usually used for making soups or stews so I went looking for a recipe.

I found one at Food52 by Pat; she posts to Foo52 and has a blog spot, inpatskitchen.blogspot.com. Her Smoked pork neck bone gravy over rice was just what I wanted.

She used 1 ½ lbs. of smoked neck bones and a lb. of ones she browned up. I smoked my own neck bones and changed the cooking order some but all the ingredients were hers.

I smoked a little over half of the bones in my Traeger seasoned with Penzey’s Cajun seasoning. I did them on smoke mode P4 and was running 170 to 180 grill level the first hour. After I got them on at 12:00 I finished up the back yard mowing I didn’t get done yesterday. At 1:00 the grandson came to stain my park bench; his first big paint job and he did great!

The second hour my smoker was running about 180 to 190 deg. grill level; I had my 6 inch amazin tube smoker going with oak pellets for some extra smoke.

At 2:00 I upped the smoker to 300 deg. for about 35o deg. grill level while I got my 5.5 quart Dutch oven with a TBS. of bacon grease heating on my outdoor gas burner to brown up the rest of the neck bones with a little salt and pepper. I had to do them in two batches and transferred them to a large stainless pot.  I added the smoked bones and covered with water. I added a stalk of celery, a small onion salt and pepper and brought to a slow boil. I took the Dutch oven inside to use for the rest of the cook.

While the neck bones were cooking I baked a box mix cornbread in a cast iron skillet in the oven. I know this is a southern dish and most southerners would prefer non-sweetened cornbread, but I am a Yankee and like sweet cornbread!

The cornbread was done and the neck bones had been cooking about an hour and a half. I removed the bones and took inside to cool. I set the pot off the burner and covered to add the broth back in.

After the bones had cooled enough to handle I picked all the meat off. I diced up a large Vidalia onion, 5 celery sticks and 1 ½ large green peppers. I used some extra of all since I had more meat than Pat’s recipe. I added a TBS. of bacon grease to my Dutch oven and took back out to my gas burner. When it got hot I added the veggies in with a little dried garlic flakes, salt and pepper and cooked until the veggies were soft. I added the broth back in and all the meat from the neck bones and brought to a slow boil. Later I added about 3 TBS. Worcestershire sauce.

I opened a can of collard greens for me to have and heated with some salt, pepper and hot sauce. My wife does not like greens. I had brown flour on hand so mixed a half cup with ¾ cup of water and made slurry to thicken the broth.

All had been cooking about an hour and a half so I added in the flour slurry; it thickened up pretty quick so I stirred in some sliced green onions and took inside. I had rice done in my rice cooker; it was a little before 6:00. My wife just had the gravy over rice with cornbread and butter. I had the gravy over rice, topped with some more sliced green onions, Cholula hot sauce, salt and pepper. I had my greens on the side and had 3 pieces of buttered cornbread to eat with it.

My wife liked it and I thought it was great. I don’t think you could find any cheaper dish with this much flavor to fix. It would fill a lot of bellies at a reasonable price! This is a true southern comfort food and tasted pretty good with the cool weather we have been having. I will definitely fix it this winter. I know my butcher will always get me some neck bones.

Seasoned bones for the smoker 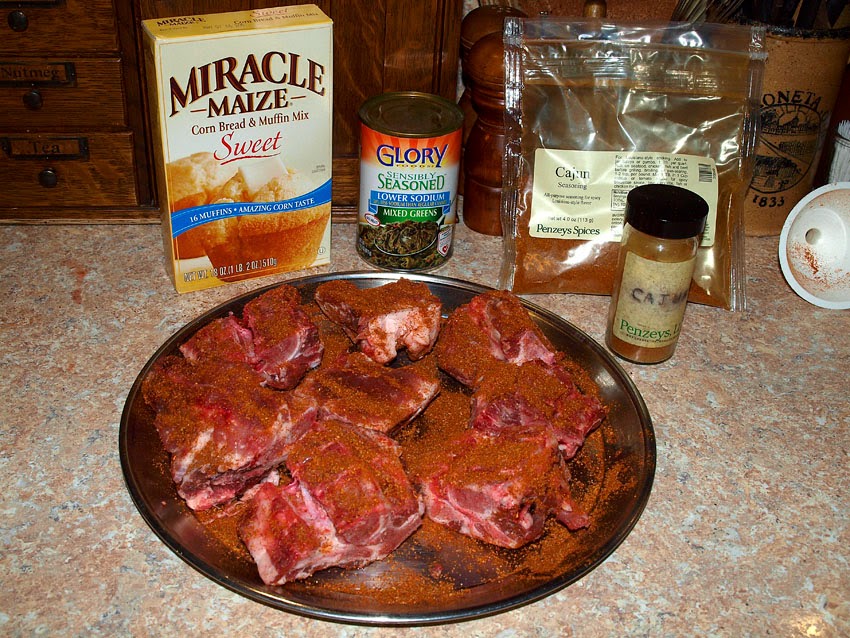 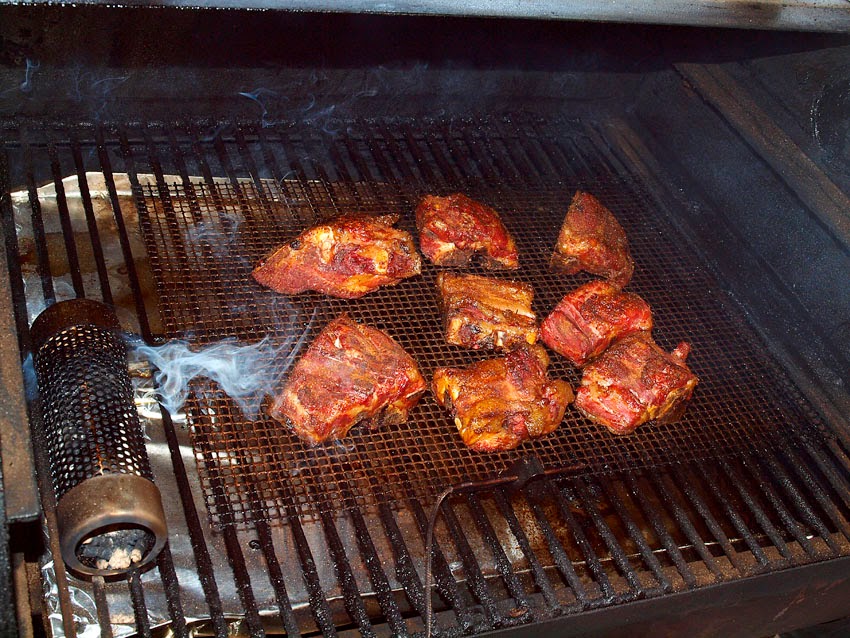 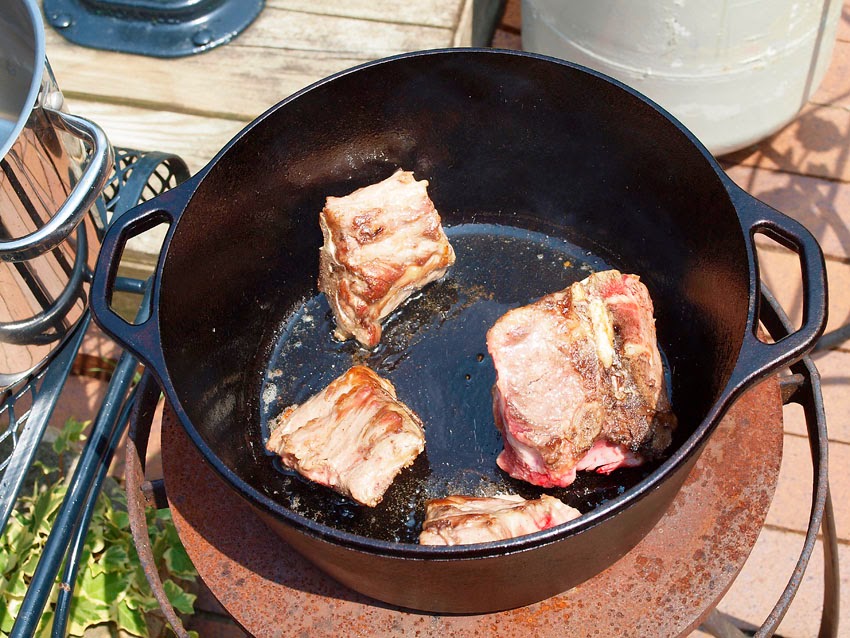 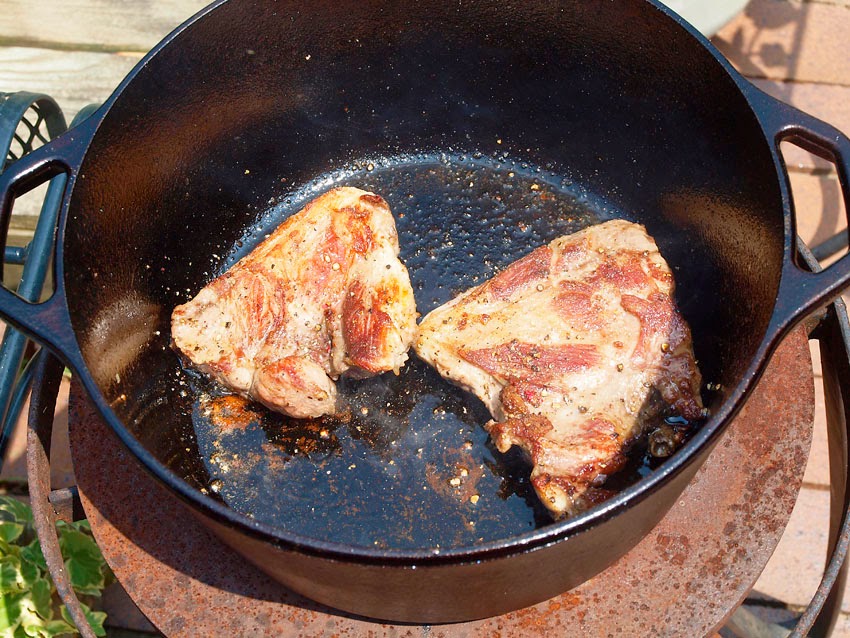 Meat in another pot 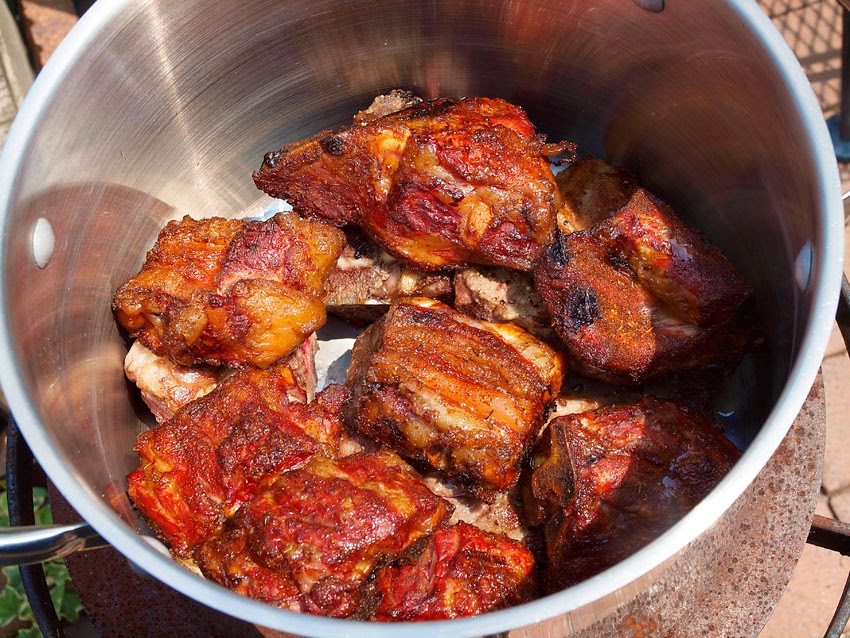 Water to cover, celery and onion 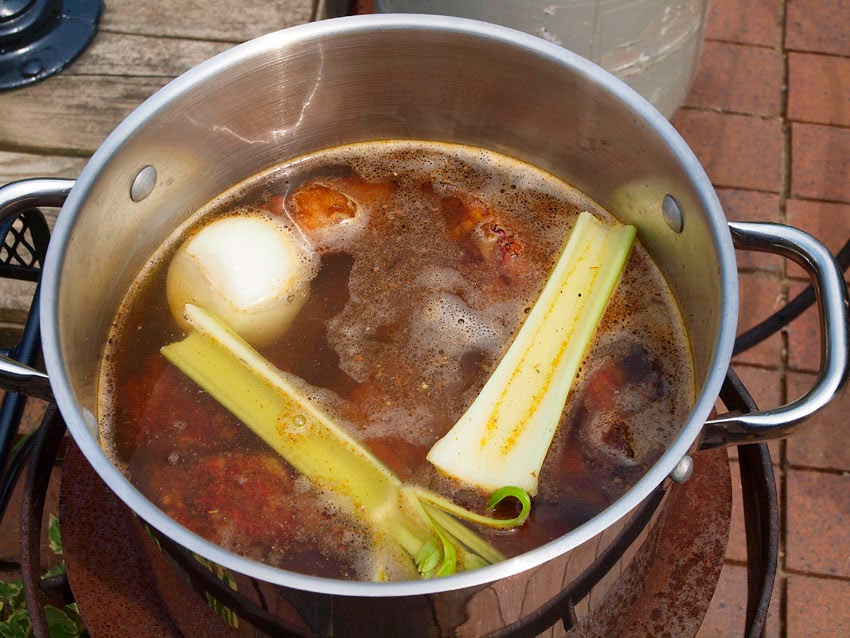 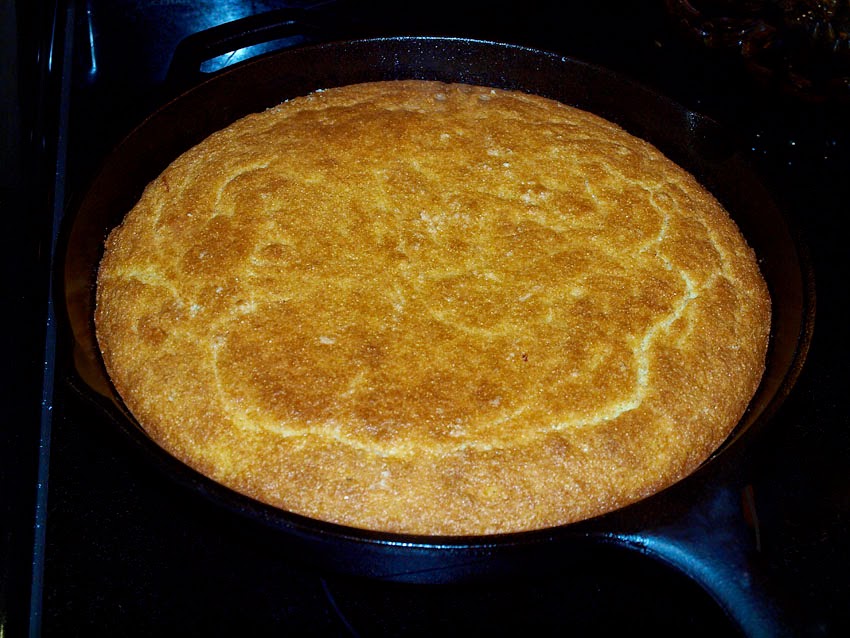 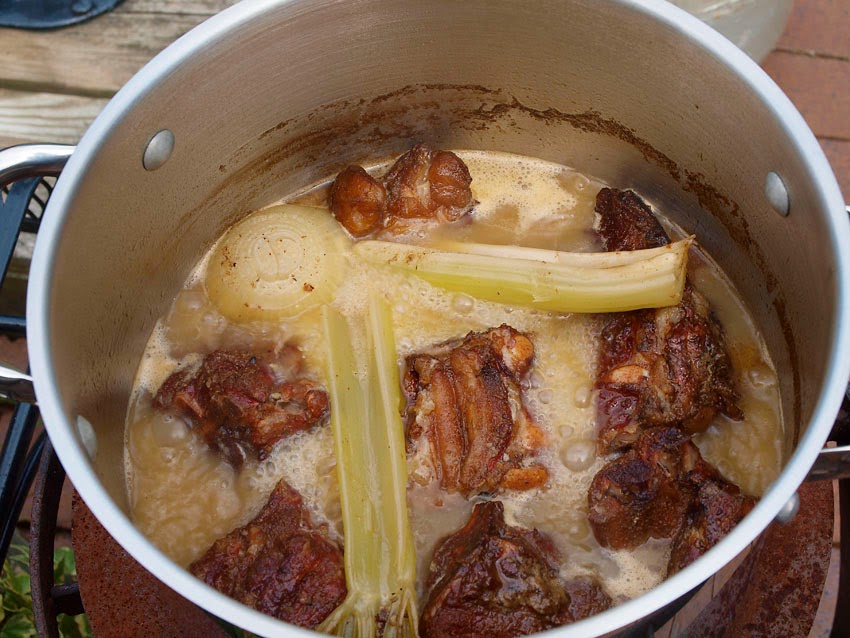 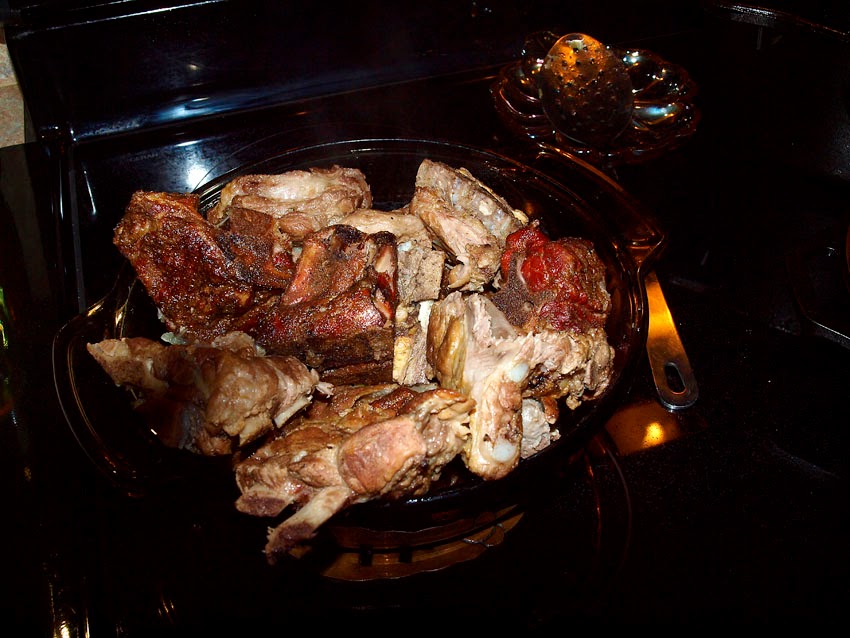 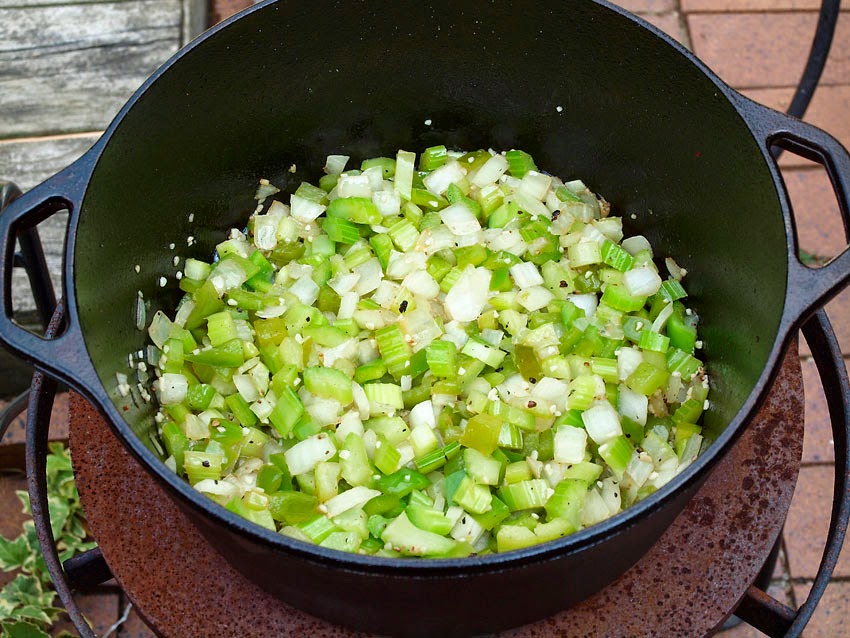 Meat to add in 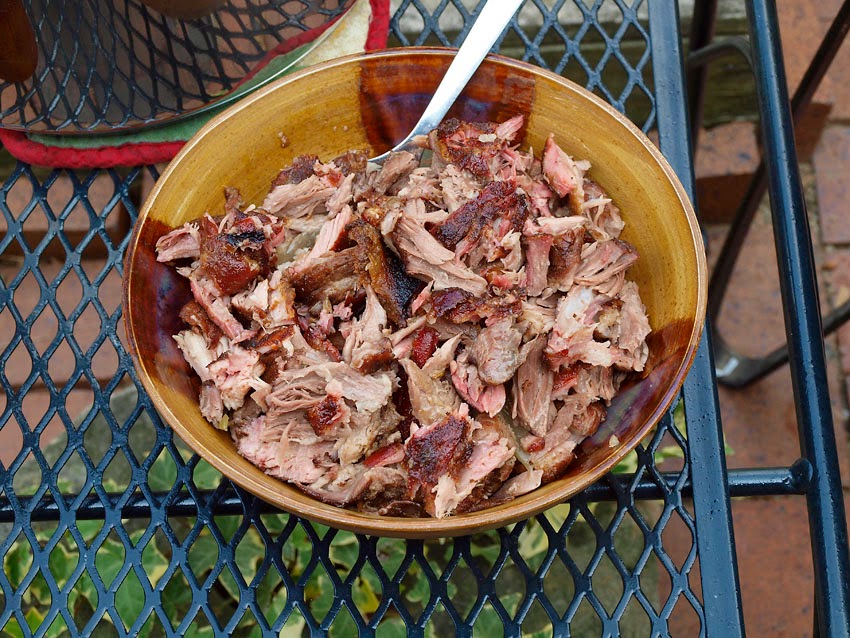 Meat and broth added in 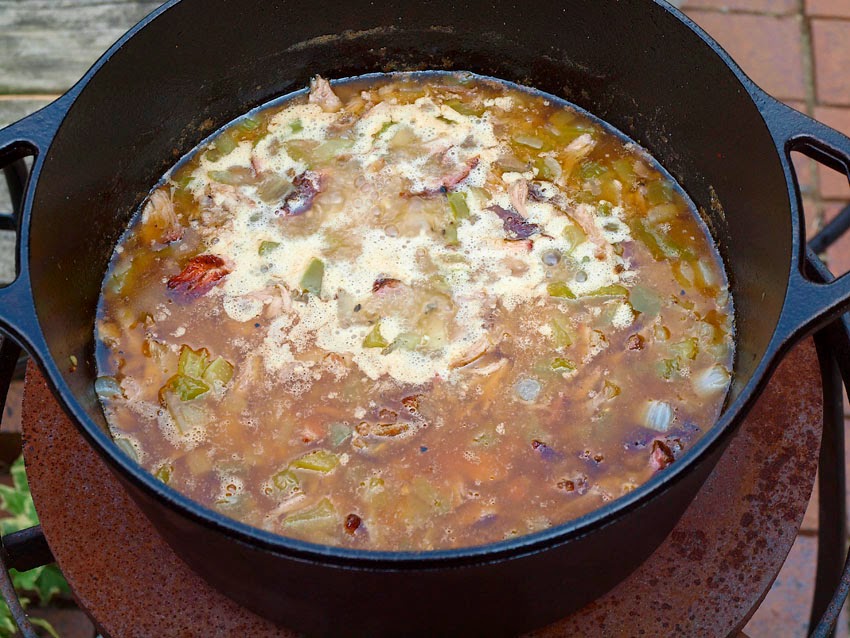 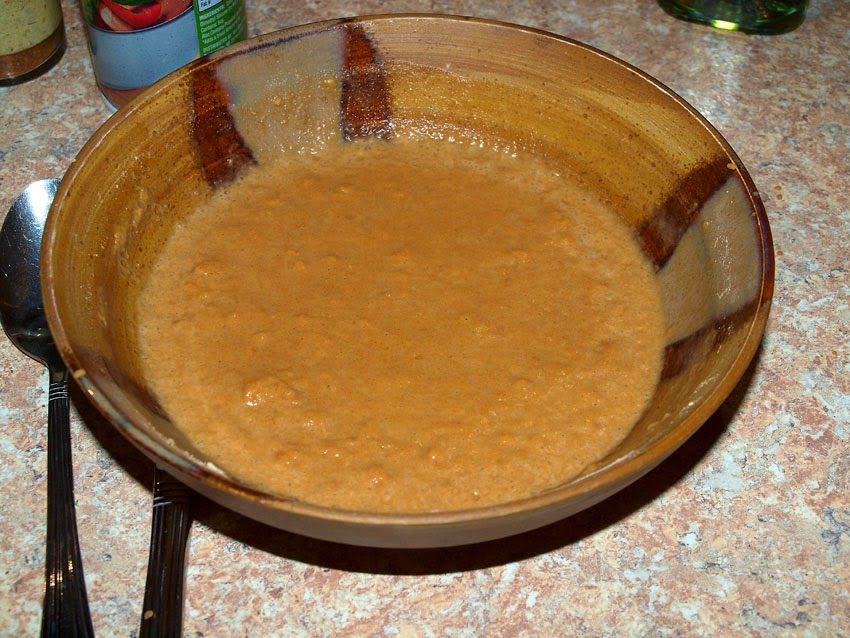 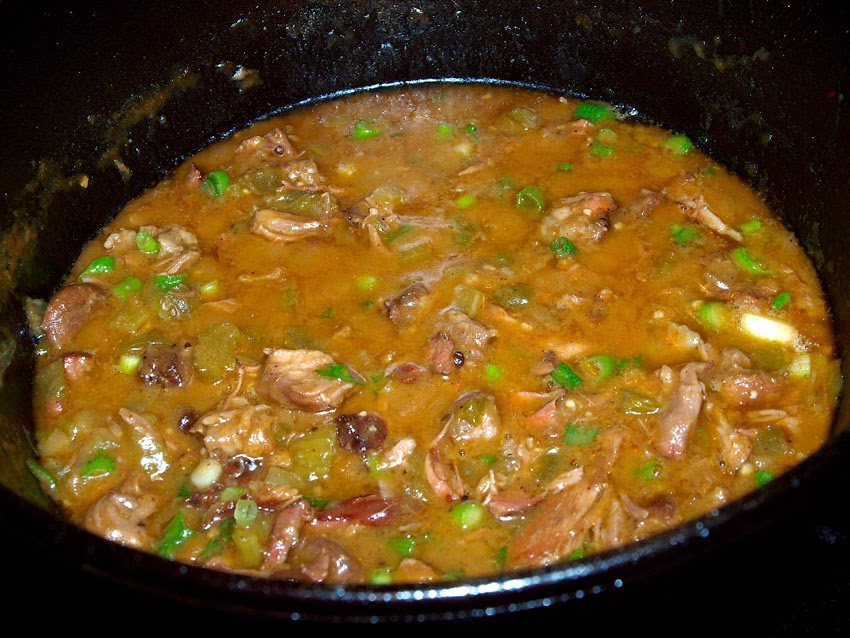 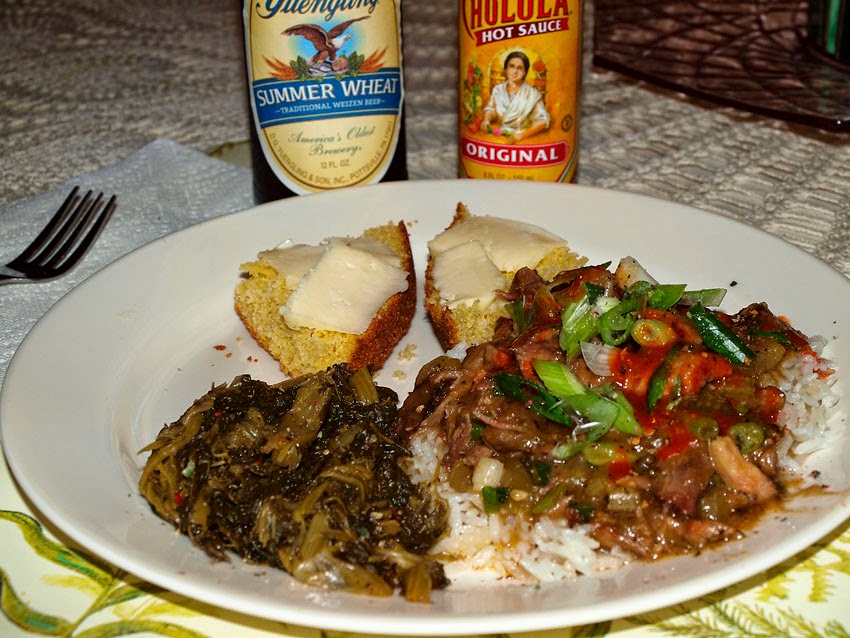