I was glad the rains got through this morning so I could use the grill for supper. The first rain came a 9:00 am for about 2 hours and we got .9 inches. The second came at 11:00 as I was setting in the garage talking to my Mom. The wind picked up and they blew the tornado warning. My wife said the news said one was spotted about 7 miles south of here and headed this way. Glad it never showed! We did get 50 to 60 mph winds I would guess and we got another .6 of rain for a total of 1 ½ inches. It cleared and was sunny the rest of the day.

I found this recipe on another forum and it was from one of Steve Raichlen’s books. Punjena Vasalica, Serbian stuffed grilled pork loin. It looked delicious so I had to give it a try. It was simple enough to assemble. My butcher had a nice 4 to 5 lb. loin roast with a nice fat cap. I cut long ways through the center of the loin and quit about ½ inch from the end to leave a hinge. I opened it up and pounded both halves to flatten some. I smeared some stone ground mustard on both halves. Then on the meat side went two layers of bacon, two layers of smoked provolone cheese then about 6 thin slices of black forest ham. I folded the fat cap half over and scored the fat lightly.

I turned it fat cap down to do the tying with butchers twine and seasoned with sea salt and ground 4 peppercorn blend. I changed the layering from the recipe; the cheese went on the bacon and then the ham. I figured the bacon would help hold the cheese in. I tied it just snug to hold it together.

It said to serve some Kajmak with the roast, a Craotian Serb cheese made from coddled milk. I found a good sub was 2 parts cream cheese, 2 parts sour cream and 1 part feta cheese. I used a cup of cream cheese, a cup of sour cream and a half cup of feta. It said to push the feta through a sieve but I have tried that and it is a pain so I just mashed the feta with a fork then mixed all together.

My sides were some of my leftover potato salad and sliced Tennessee tomatoes.

The recipe was to do the loin on charcoal direct medium high heat for 6 to 8 minutes per side or until up to temp. I have a Weber Jumbo Joe but was afraid to try it not being used to cooking on it. I decided to do mine on my Traeger for 45 minutes on smoke mode 180 deg. and then finish on my weber gas grill at 400 deg.

I had it in the Traeger for 50 minutes and then put it on my Weber, fat cap down. I had sprayed a little olive oil on first but must have done more than a little! I soon saw some dark smoke, I checked and I had a major flare up. I didn’t have a water bottle like I should have but was able to move the roast around and get the fire out. I did 8 minutes per side and was only up to 130 deg. IT. I turned the heat down a little and went until I had an IT of 140 deg. another 10 minutes or so.

I tented it with foil and let sit 10 minutes before slicing.  I served us both a nice slice along with the potato salad and tomato and half buns smeared with some of the cheese. I had some of the cheese on the pork and on the tomato that was topped with some Penzey’s sandwich sprinkle. The pork had great flavor, the wife even mentioned how good it tasted.


I found this recipe on The Foods of the World Forums by Tasunka Witgo. He has some great photos and more info on the great pork loin. Click here to see it. 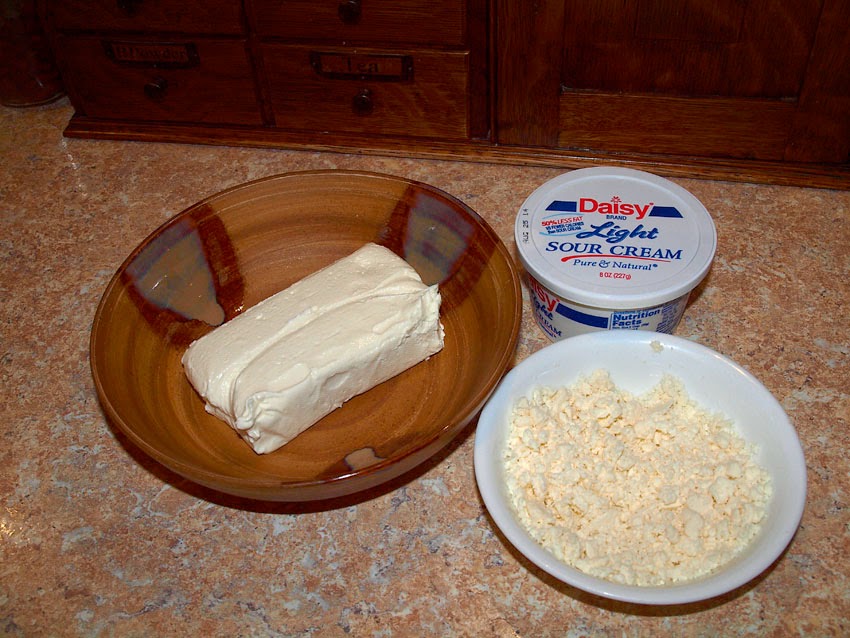 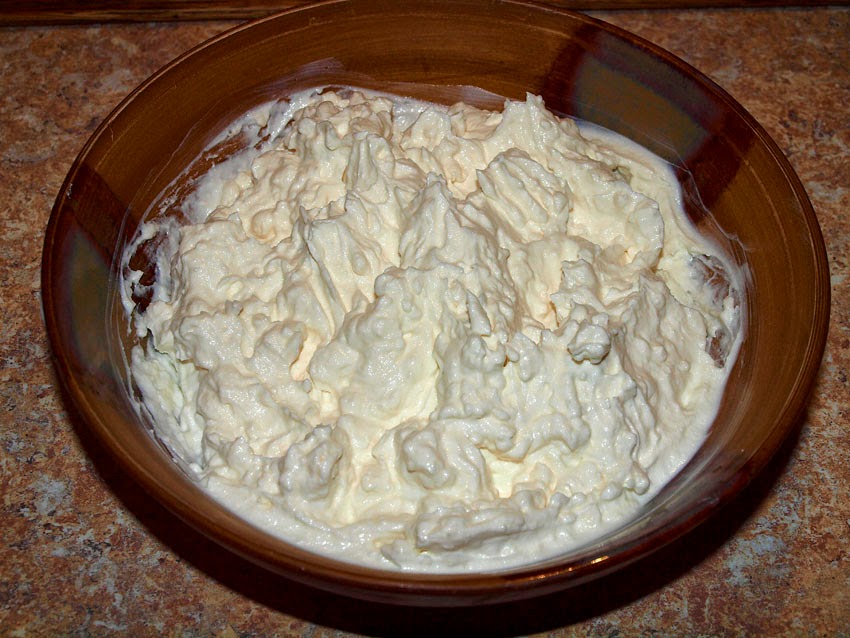 Bacon for the loin 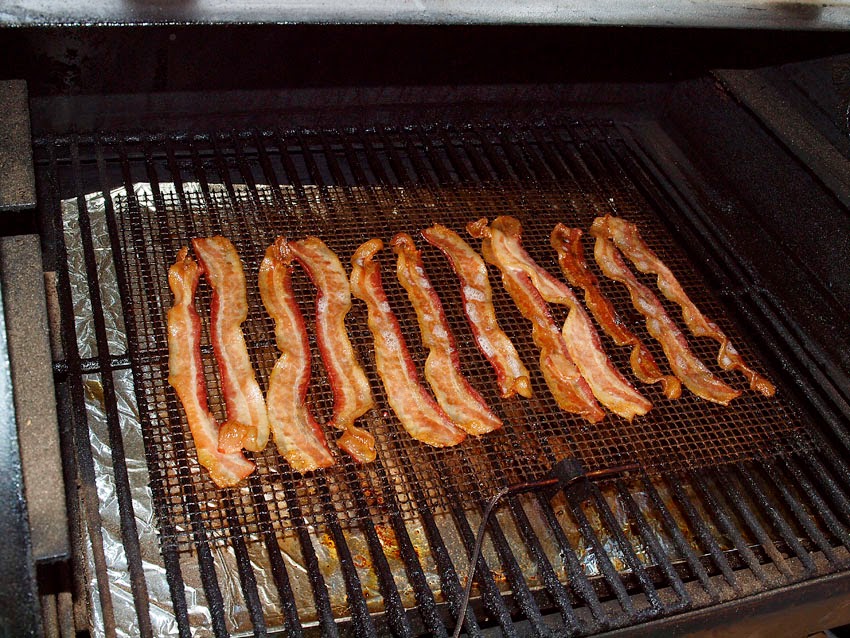 Loin and the stuffings 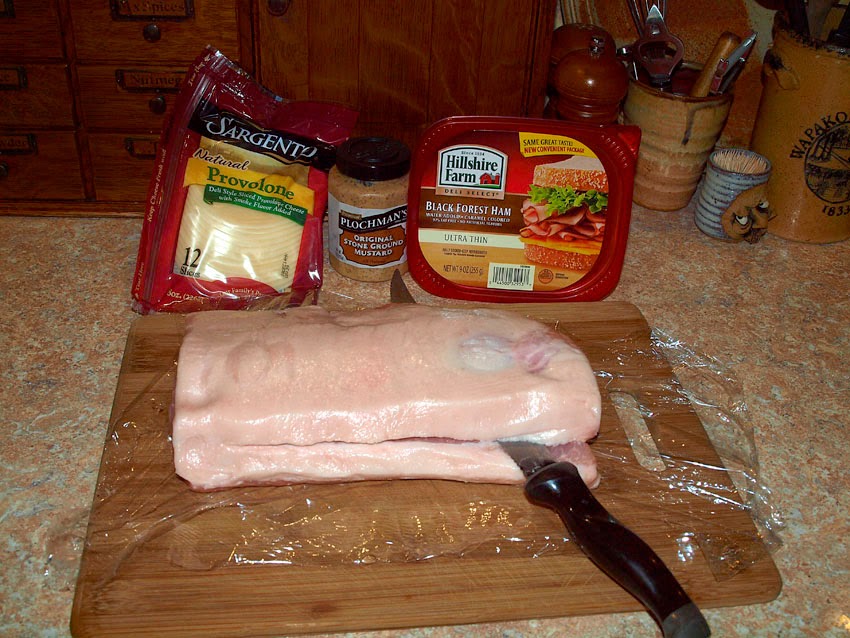 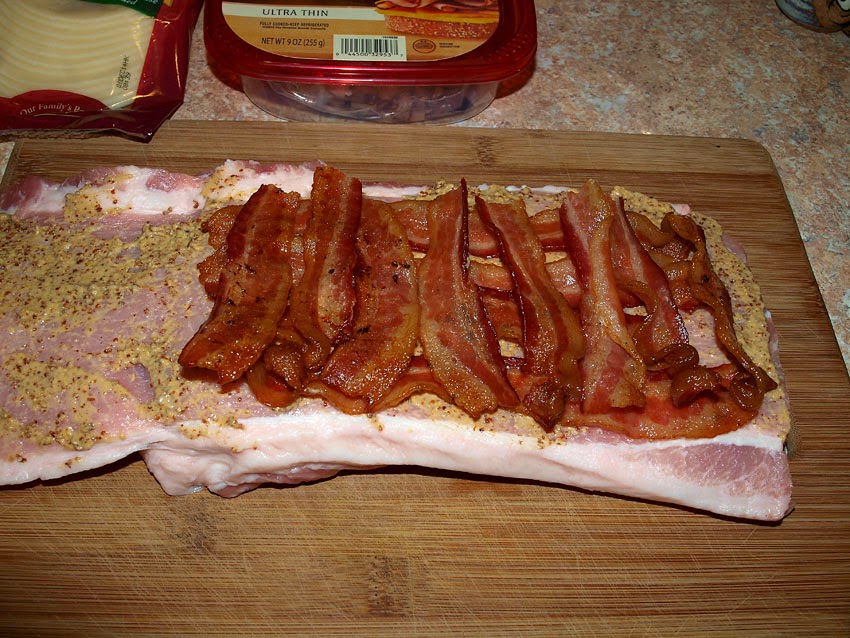 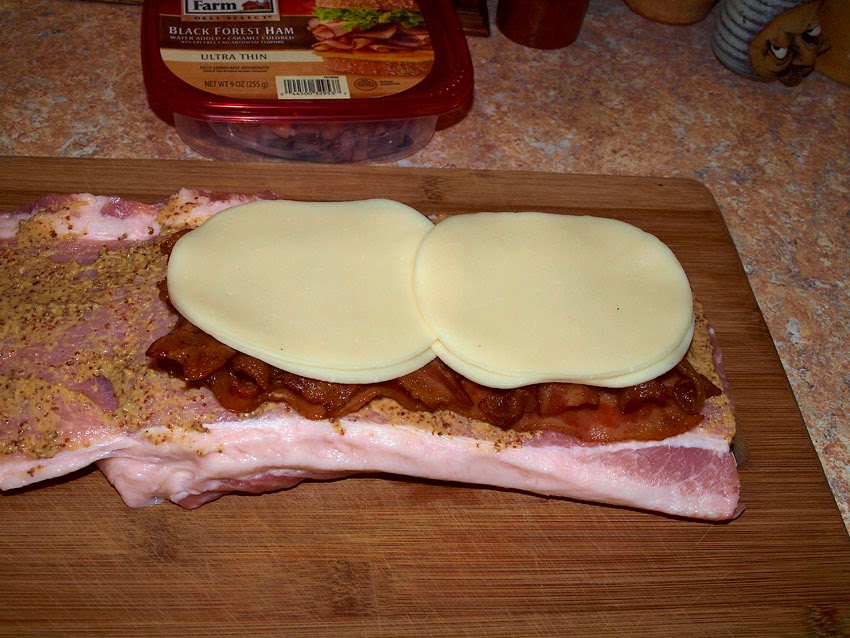 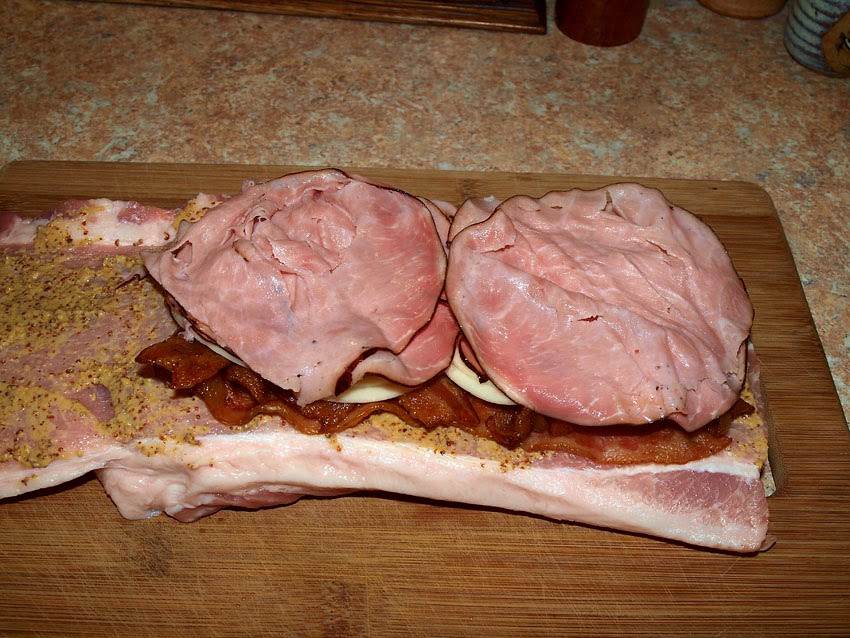 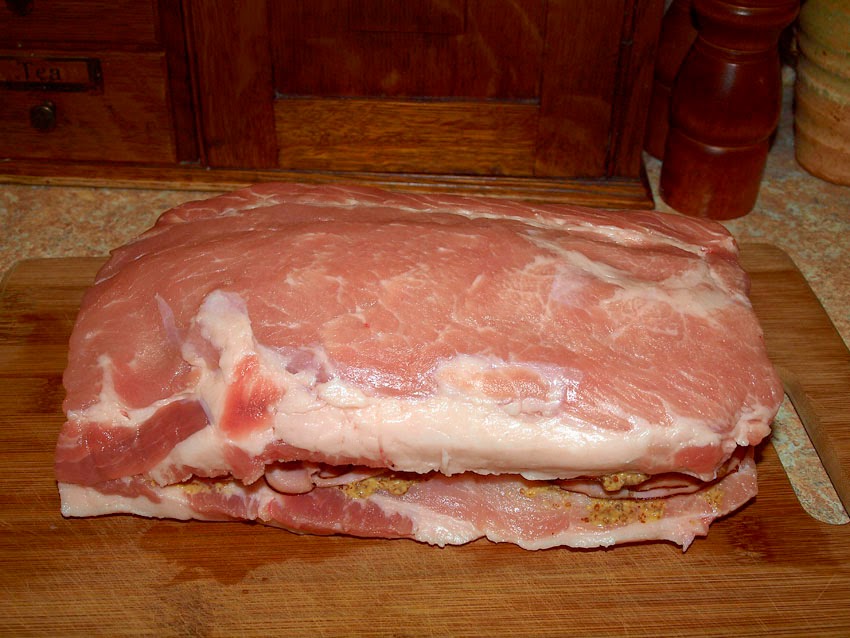 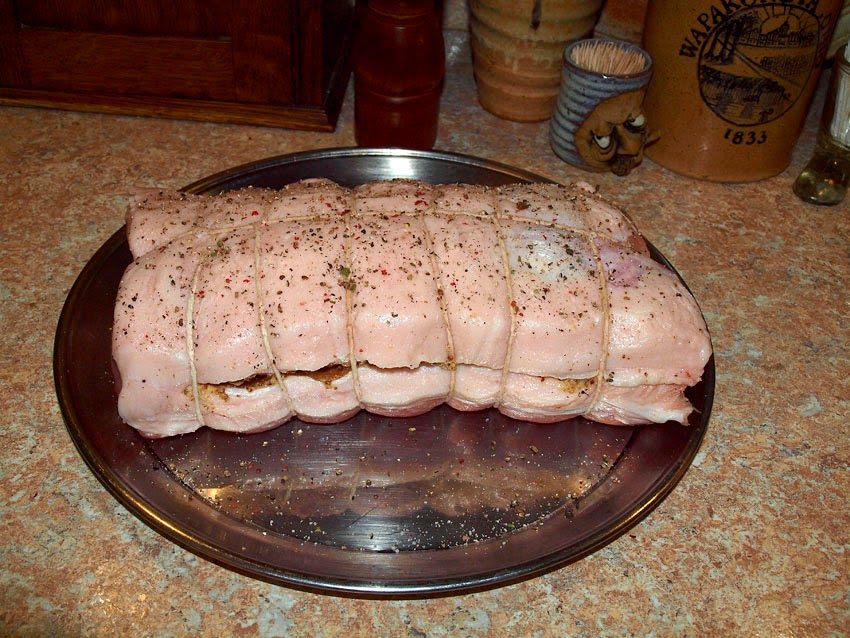 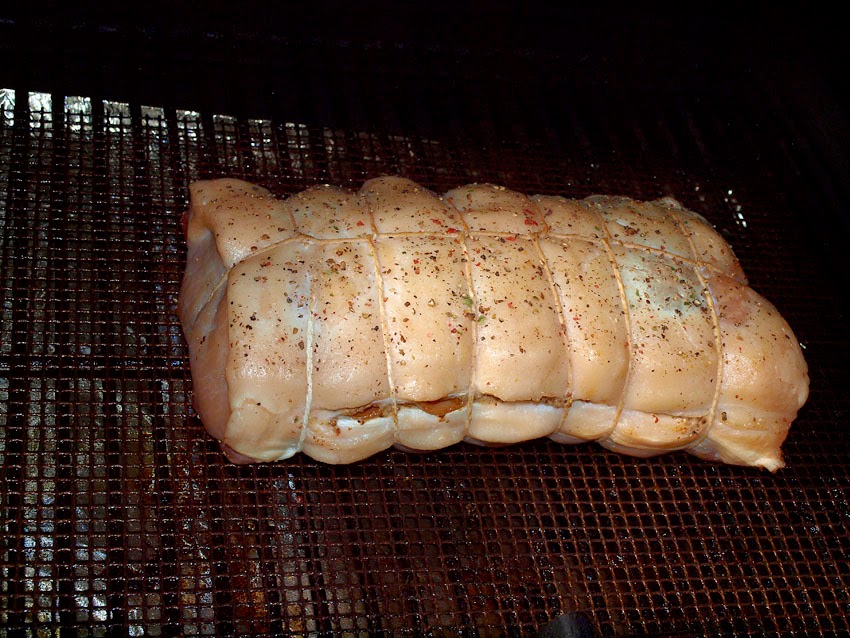 Finished on my Weber gas grill 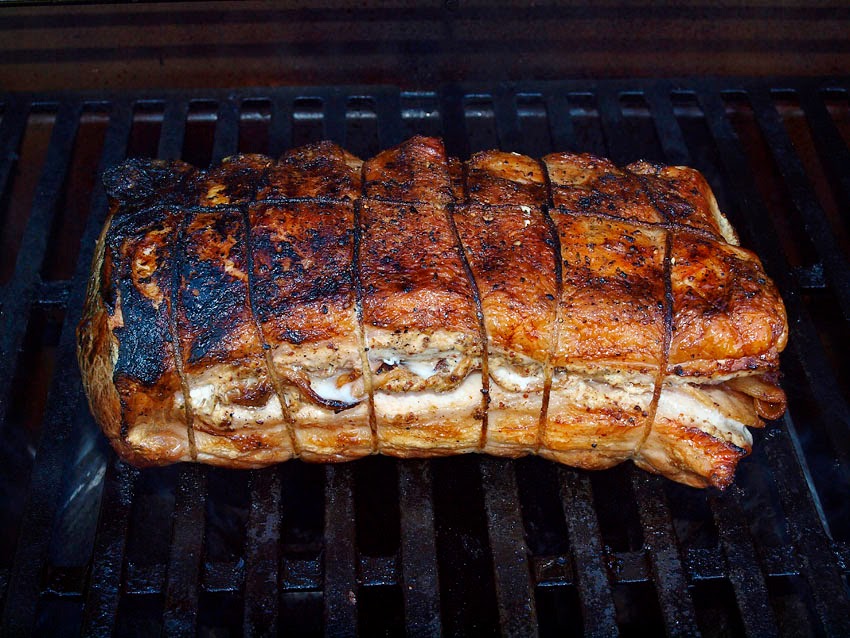 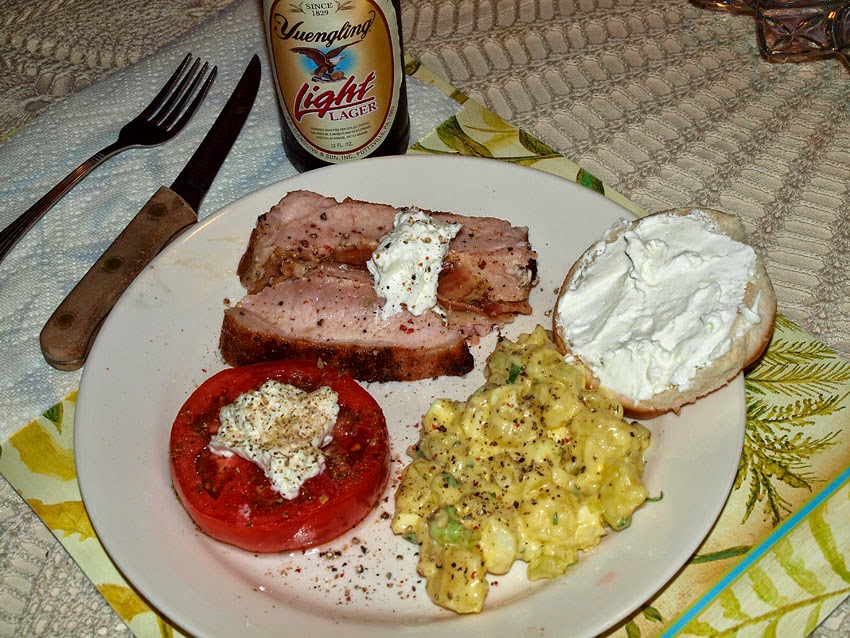