Yesterday it was an all day cook. I had a 7 lb. pork butt & smoked for pulled pork. I have a cousin coming from Texas for a family reunion she does every 2 yrs. She is coming over next week-end for lunch & wanted some pulled pork for her. The day before I put some Smoked Spanish Paprika, & Galena Street rub, from Penzey’s, on the pork & in a plastic bag to marinade overnight. I didn’t use my usual red wine vinegar to wet down this time, just the seasonings. I got up at 5 am took the pork from the fridge to set out. Fired up the Traeger & set on 180 deg. At 6 am I got the pork on & watched the smoker settle in at 180 to 190 deg. I went back to bed until 9:00 & the smoker was running at 200 deg so & upped the P# one & it settled back to 180 to 190 deg. After 5 hrs I inserted the temp probe & was up to about 130 deg IT. I let it set on the 180 deg. for 7 hours, one hr. per lb. then went to 225 deg. Usually I go to 225 after about 3 to 4 hrs. but wanted to try this one time. I upped the smoker 25 deg every half hr. & wound up at 300 deg the last half hr. When it reached 170 deg IT I double wrapped in foil & added ¼ cup liquid, half water & apple juice & 1 TBS Worcestershire sauce. Just before 4:00 pm it was at 202 deg IT so pulled & placed in a preheated 180 deg oven, turned the oven off & let rest for about an hr. Total cook time was about 10 hrs. After wrapping in foil it can be pulled & finished in an inside oven if wanted. You can save on pellets since it doesn’t take on any more smoke anyway. I was too lazy to take inside until done! After resting I opened the foil & let cool awhile before pulling. It was really moist, had at least 1 cup of liquid, I drained the fat from & added back to the pork. The bone pulled clean & it pulled easily. The bark was extra good, the wife & I could hardly stay out of it.

At noon I had come in & made up some of my friends, Billy Merril’s, $10,000 slaw. If you belong to pelletheads.com forum you can get the recipe there. It is his version of a recipe from a famous BBQ place where he lives in North Carolina. The owner said someone came in & offered him $10,000 for the recipe & he turned them down. Anyway it is delicious & goes good as a side or on the pulled pork. I cut halves from the cabbage head leaving the core & a slice about 1 inch thick. I rubbed it with a little Better than beef bullion, double wrapped in foil & poked a hole with a toothpick & on the smoker the last 2 hrs. I did up some frozen sweet potato fries in the oven, Alexia brand. They are as good as I can make myself. I served the pulled pork on a COWB, cheap ole white bun, placed a little Bone Suckin Sauce on the bun then the pork & topped with slaw. The sweet potato fries & cabbage went well with it.

I think I will stay with the lower temps an hr per lb. on my pork roasts from now on, really came out good. The smoked paprika enhanced the smoke flavor well. Some people do not foil at all but I have had better luck when I foil the roast after it hits 170 deg. IT.

Seasoned & on the smoker 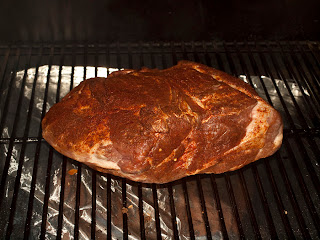 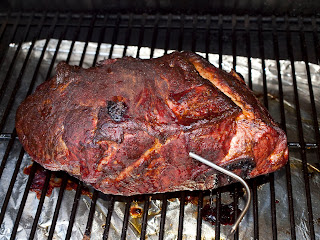 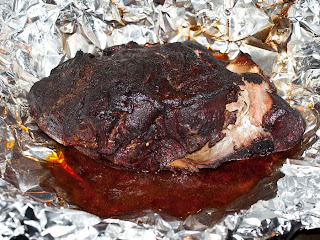 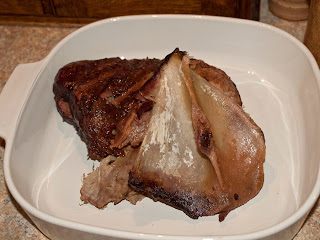 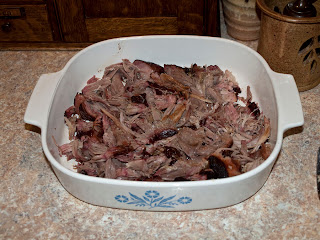 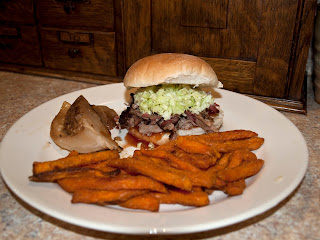