Today I was in a lazy mode, 98 deg & 50% humidity. I have really been in a lazy mode all week since my wife is away. We will have been married 45 yrs. in Aug. & I think she has become like part of me & when she is gone part of me is missing. I had some corn cut off the cob that needed used up and the Cajun brats from the day before. I knew there were ripe tomatoes & squash in the garden. When I went to pick tomatoes the Raccoons had been in them & ate part of three of the ripest & biggest ones. A neighbor said there was a mother & 2 young ones around the neighborhood & they have been getting into peoples garbage on pick up day. Anyway I could only come up with 3 tomatoes & picked 2 nice size yellow squash. I planned to grill the squash & tomatoes then cut up, add the corn & make a salad with white balsamic vinegar & the runny Philly savory garlic cooking sauce would be good on top along with a Cajun brat. I use the white balsamic vinegar a lot on veggies that I want to keep their nice color.
I made my salad early so it could marinate awhile before supper. I had thought about using the smoker for the veggies but my Weber Q100 would be quicker & I could get some nice grill marks for that fire roasted taste. I sliced the squash & tomatoes, sprayed w/olive oil & some salt & fresh cracked pepper. I fired up my Weber & put the yellow squash on over the burner, did for 4 min. then flipped & moved to the front & added the tomatoes, did them for 3 min on a side. I pulled & took in the house, let them cool about 5 min. I slice the yellow squash & cut up the tomatoes, added to a stainless steel bowl, added my leftover corn, a few good splashes of white balsamic, salt & cracked pepper. I also added a few shakes of Penzey's Cajun seasoning, it's pretty mild. I covered & placed in the fridge until supper time. Afterthought was some chopped Vidalia onions would have tasted good in the salad too.
Supper time I toasted my hot dog bun, nuked the Cajun brat & some onions I had leftover, in the toasted bun w/mustard & onions on top. On the salad I topped w/a couple of Tbs. of the Philly cooking sauce & some fresh chopped chives for garnish. Tasted good & thought the Philly sauce was great on the salad.
Tomorrow I will have leftover leftovers, no time to cook, it’s clean up day. Have to get the house in shape for the wife! 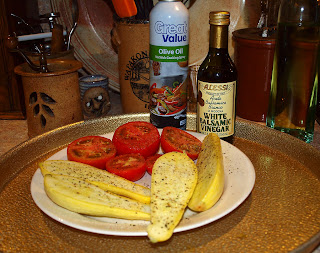 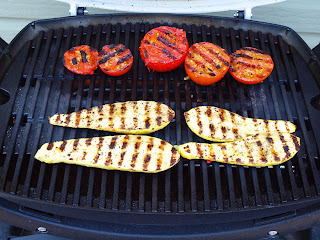 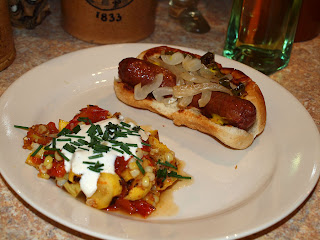 Smokin Don
Posted by Smokin Don at 9:11 AM

Email ThisBlogThis!Share to TwitterShare to FacebookShare to Pinterest
Labels: Leftovers