Saturday my Cook would be a Ham loaf from Kah Meats, some little red potatoes, & yellow squash from my garden. My yellow squash is doing good so will probably be in my cooks for awhile. I just checked the Suter’s produce site & says sweet corn will be ready in 7 to 10 days. They are a local produce farm that grows corn, melons, tomatoes, & Etc for the local market around Lima, Ohio. They set up red barns, 14 of them, in 9 different cities. Their sweet corn is picked daily so it is always fresh, they bring in a pickup load daily & open at 10 am, if you’re not there before noon you may be out of luck! They have been in business for 3 generations. I like to get several doz. before the end of the season, & freeze up for the winter months.

My Mother likes Kah’s Ham loaf & the last time I took her one thought that should be good on the smoker. I was worried about drying it out if I tried too low of heat, I have had that problem with meat loaves. After cooking at 225 to 250 deg for 1 hr. 25 min. it was very moist so next time will do one on smoke setting for awhile, the ham would taste better with a little smoke flavor. I made up a glaze of ¼ cup brown sugar, 2 tsp. Dijon mustard, & 1 tsp. butter. My red potatoes were #1, all 1” or less, cleaned, trimmed some & cut several in half for all to be uniform size. I mixed some Panko bread crumbs & parmesan cheese for on the squash.

I started up the smoker & set to 225 deg. Set the ham loaf out about 20 min, reformed into loaf & added some Panko bread crumbs, olive oil on my enameled pizza pan & placed ham loaf on it. Placed potatoes in a bowl, drizzled w/olive oil & Paula Deen’s Crazy Salt, they would be placed in a grilling basket my wife bought me from Pampered Chef. The pizza pan & basket are two of my favorites for on the grill. The pizza pan allows for easy turning or moving meats, used mostly for meat loaf & fatties. The basket will hold anything small. I should know better on the potatoes, even as small as they were they were not quite done. I find if you are cooking lower than 300 deg, potatoes need to be precooked some. I got the potatoes on at 4:45 & the ham loaf at 4:55, at 225 deg. I went inside & mixed up the glaze, I did it for 20 sec. in the microwave before adding o the ham when it got to 140 deg IT. I cut the squash in half, drizzled on some olive oil, & Paula Deen’s Crazy Salt. At 5:40 I tuned the smoker to 250 deg & was time to add the glaze on the ham loaf. When the loaf got to 150 deg IT, I added the squash cut side down on the grill for about 10 min. Then I flipped them over & added some of the Panko bread crumb mix. It was about 6:15 when the ham loaf got to 165 deg. IT. It sure made a good meal & the ham loaf will be good in sandwiches tonight for an easy meal! 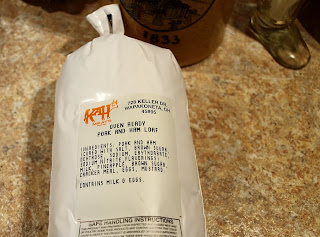 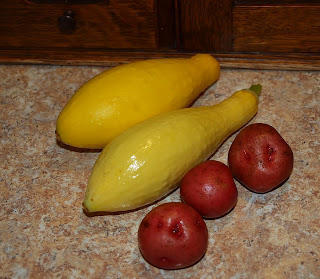 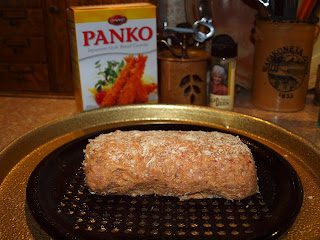 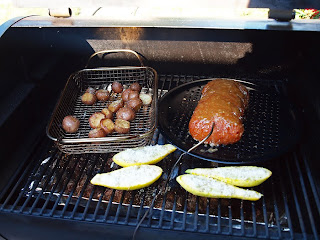 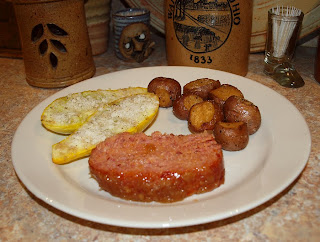 Email ThisBlogThis!Share to TwitterShare to FacebookShare to Pinterest
Labels: Ham