Yesterday was another hot humid day, we get a lot of humidity but no rain. Just me & the dog here, my wife is at our daughters in Lake Charles, IL. I got around in the am & took some of my leftovers, & a yellow squash and two tomatoes from my garden to my Mom 45 miles away. On the way home I stopped into Kroger’s & bought some potato hot dog buns and a pablano pepper to stuff. I also got some Philly cooking cheese. I decided to get some brats from Kah’s my butcher to fix for supper. I chose his Cajun brats, I like a little heat once in awhile & my wife doesn’t so might as well have some while she’s gone. Kah’s has some brats hotter than the Cajun, Firehouse Brats but they are almost too hot for me.
After lunch I cleaned the smoker for my cook. Then I sat there sippin on clod beer until time to get my food prepped. About 4 I went in & stuffed my pablano. I cut it in half to do boat style. The Philly cooking cheese really was not ideal for stuffing, too runny & more suited for pasta sauces. There are some recipes on the Kraft food site. I had the savory garlic & really had a good garlic flavor so I used 2 Tbs. of it, added some shredded Italian blend, some shredded sharp cheddar, & some fine chopped orange pepper. On top of the cheese I added some chopped, leftover pulled pork. I would add some shaved parmesan near the end. I had some corn I had cut off the cob that would go good with the brats & pepper.
A little after 5 I fired up the Traeger & heated to 225 deg & would do my cook for 1 ½ to 2 hrs. I sliced some Vidalia onion & green pepper for on the top of my brat. I used the onion to prop up my pepper halves. I didn’t roast & peel my pablanos, I really don’t mind the peels. After 1 ½ hrs the brats were up to temp so added some shaved parmesan to the peppers & went to 300 deg for another 15 min. Had the brat with mustard, peppers & onions. Nuked the corn w/butter, & drizzled some BBQ sauce over the peppers. Tasted mighty fine along w/a cold beer. I better go get my dish washer unloaded & my dirty dishes from last night in. Tomorrow I need to do my laundry & spruce up the place. For when I go get my wife Saturday!
In the photo of the peppers I show one before I added the pork. 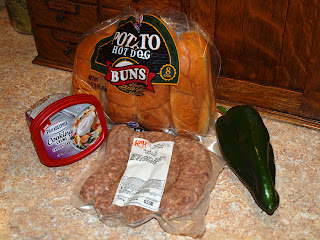 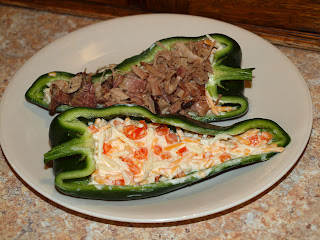 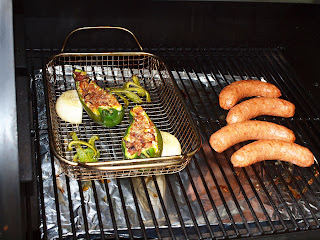 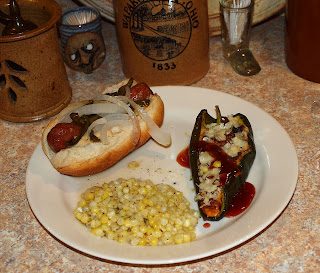