Still in the search of a Papa Murphy’s pizza my wife came home with 4 small California Pizza Kitchen , all different. I still prefer making my own, or from the Beer & Wine Depot, but wanted to find a good one that would be quick & no prep. For our Friday night supper I chose a Margarita & a Sicilian style. I added some extra shredded mozzarella to the Sicilian one, thought it was a little skimpy. I like doing the small ones on the Traeger, easy to handle. I cannot have pizza without beer! I had a good pale ale from the Great Lakes Brewery in Cleveland, Ohio. Copied from their site: “In the 1870s, Cleveland had 30 breweries. By the early 1980s, the last one had shuttered its doors. So when brothers Patrick and Daniel Conway opened Great Lakes Brewing Company on September 6, 1988, it not only signaled a new era in Cleveland brewing, it was also the first microbrewery in the state of Ohio.” I had their Burning River, a pale ale, named after the Cuyahoga River in Cleveland that caught fire, at least 11 times over the years until the one in 1969 brought national attention that led to a clean up. It ranks among the best pale ales I have had.

I fired up the Traeger & turned to high, after 20 min it was up to 410 deg so added the pizzas, after 7 min & rotated them since the right side runs hotter. Another 8 min. & they were just right so pulled, cut, & served along with some chips. My wife & I had half of each one. I liked the Sicilian better than the Margarita but like the DiGiorno pizzas I thought they did not have enough sauce. So I guess my search will go on for the perfect store bought pizza to have on my Traeger.
Tonight I will be having a ham loaf, baby red potatoes, & yellow squash from my garden. 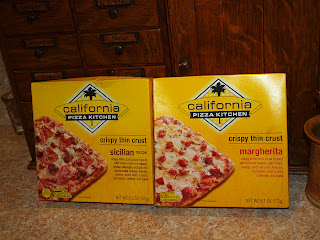 Cheese added to Sicilian on the left 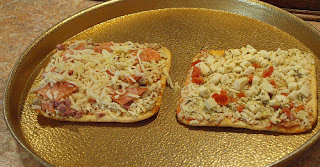 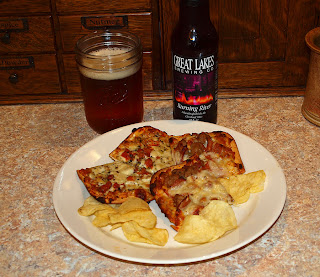