The other night the neighbor brought over a big bucket of tomatoes and wanted me to take some or all. I took about a dozen; I was about tired of tomatoes out from my garden.  I thought I would make a casserole with them and had a glut of shredded cheese that needed used.

I went to the grocery this am to get some yellow squash and would have a tomato yellow squash casserole. The few yellow squash they had looked terrible so I got zucchini instead. I went to my butchers and got a couple of pork cutlets to have with the casserole.

I just kinda winged it on the casserole. I sprayed my dish with some olive oil, a layer of sliced zucchini, a layer of sliced tomatoes, a couple slices of onions chopped, some oregano, tarragon thyme, and a few handfuls of two different kinds of shredded cheddar.  I repeated the layer and just added oregano salt and pepper. I poured a little half and half over; maybe ¼ cup. It went into a 350 deg. oven and thought about 45 minutes.

Checking the casserole after ½ hour I added some parmesan cheese and turned my convection fan on.
I had seasoned the pork cutlets with some Penzey’s pork chop seasoning and dredged in some corn flour shaking the excess off. I heated my Lodge CS skillet on med. high and sprayed with some olive oil. I fried the cutlets about 5 minutes per side. I had heated up some garlic knots to have. The casserole was in for 50 minutes when I took it out. It was bubbly and the cheese was starting to brown some.

That was a kinda light but filling supper. Tasted great and the wife and I both thought the casserole had good flavor. 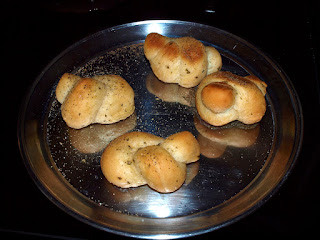 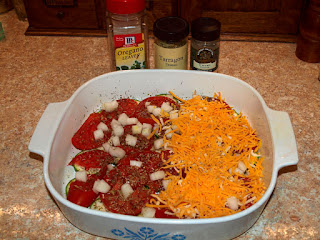 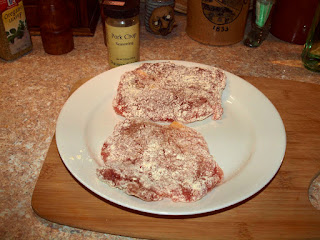 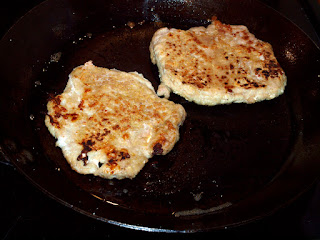 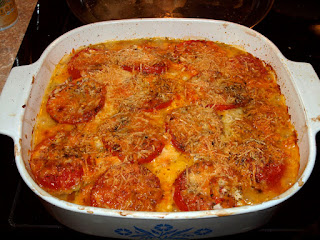 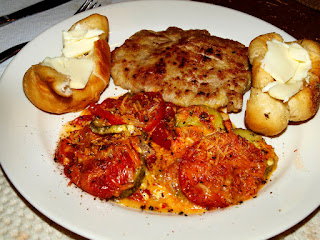