I had two nice rib eyes and found some good looking lobster tails at Krogers. I was getting hungry for lobster. These were rock lobster ½ pound each. I found a recipe that said to par boil them for two minutes then split and do on the grill with garlic butter.

The rib eyes were salted with kosher salt and on a rack in the fridge about 5 hours. I baked some garlic knots for bread and the wife made us a small salad. I par boiled the tails, split and brushed with garlic butter. The steaks I had figured about 5 minutes per side and start the lobster after they were flipped.

I had my Weber Spirit heated to medium 400 deg. and used the back on my grill grates. The steaks had been on 5 minutes and flipped. When they were about 135 deg. I put the lobster tails on cut side down for 3 minutes added some butter.  I checked and the tails had a nice char mark to them so turned the shell side down and brushed on more garlic butter.  After 4 minutes I checked the temp on the steaks they were done so moved them to the warming rack and let the lobster go a few more minutes.

The steaks just had salt & pepper and added a pat of Gorgonzola Chive Butter to serve.  The steaks were a little over done but still nice pink to them. The lobster tails I thought I was over cooking but we had to give them a short nuke in the microwave. Tasted great, the wife and I neither one could eat all the steak but managed to get the lobster down!

I was so engrossed in eating the lobster I didn’t miss the dog. He is usually sitting or lying by me hoping for a little bite. I called and he was not here, I checked the garage, he goes out there and I don’t see him sometimes and if the side door is open he wonders off. I went looking for him and went outside the fence and was calling and looking for him. He usually stays within the block in the back yards. I looked down one way in the alley and headed the other way. There he was inside the fence behind my shed eating on something.

Here he had a pretty good sized rabbit and except for the head had about the front half eaten. He gave it up pretty easy, must have been full! He looked pretty content and I guess he was saying go ahead and eat steak I’ll have rabbit! 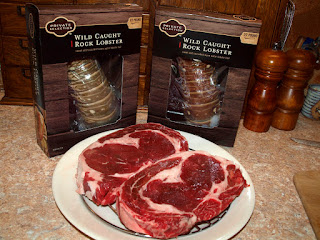 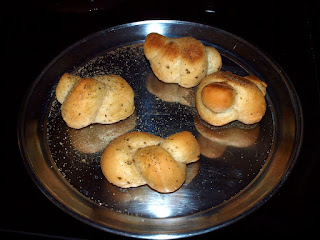 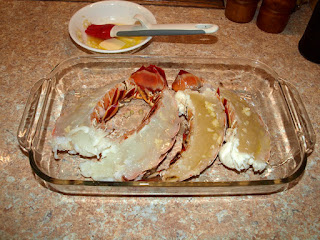 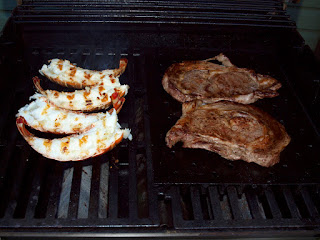 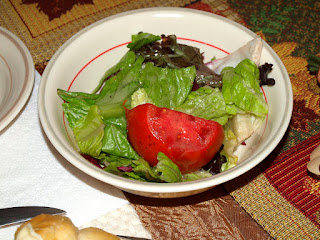 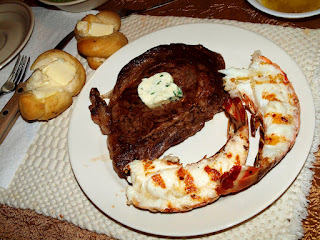