A beautiful day today; it would have been a great day to cook out. My wife is sick with a cold so told her I would bake her chicken & noodle soup. I went to the grocery for chicken and some good noodles. Out of two groceries I could not find a chicken less than 5 pounds. I wanted one 3 to 4 pounds but I did get the good Waltz’s Amish style noodles.

I had a recipe from Instant Pot for some Salt baked chicken (no water added) I wanted to try. About 12:30 I decided to get the chicken done early and make the soup at supper time. I got the chicken cleaned and seasoned with the salt sugar mix and in the pot. Instead of the soy sauce and wine I just added two Tbs. of Worcestershire. I didn’t think the sweet would go that well using for my soup. I also added a slice of sweet onion chopped to the pot.

I placed the chicken in the pot, almost too big for it, locked the lid and on poultry setting. It came up with 15 minutes cook time. The recipe said after the first cycle to turn the chicken and do it again. When I turned it I checked breast temps and had about 120 deg.

After the second cycle on poultry I checked breast temps and had 150 to 160 and the legs and thighs were at 170 deg. I like it more done than that but removed it to cool. When cool enough I started to pull the meat. When I got down to the wish bone I had some pretty pink meat so I put the carcass back in the pot for another cycle. It was really done then and got all the meat pulled off the bones. I saved a lot of the breast meat for other dishes. I strained the pot juices and separated the fat with a gravy separator.

It was getting late since I did the chicken 3 cycles so I decided to go ahead and cook the noodles then back in the pot with all and use the slow cooker setting to hold until supper time. I boiled about 10 oz. of the noodles in a quart of chicken stock for 25 minutes; I usually do them 45 to 60 minutes. I added them to the pot, added the pot juices, some pepper, a Tbs. dried parsley and about 2 pints of water and set the pot on Slow Cooker Medium. This was about 3:00.

I checked them at 4:30 and needed more water; those noodles really suck up the liquid. I set the slow cooker mode down to low. Our son stopped in about 5:30 with his dog he had out for a walk. We had a beer and watched the dogs. His dog is twice as tall as mine and a female, mine is a male and only one thing on his mind! They are funny to watch!

After they left we had our supper. I had some Bob Evens sour cream redskin potatoes to have and I toasted some rye bread. It all tasted pretty good; I think the noodles were a little over done. I think they are best after boiling until done instead of setting in the pot too long. Next time I would start closer to meal time if I just wanted to use the Instant Pot. I think the chicken would have come out great and been done in the two cycles if I had a smaller chicken. 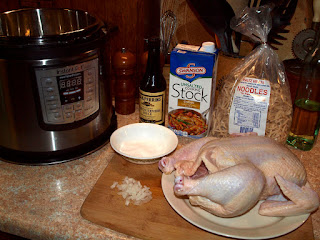 Chicken in the pot 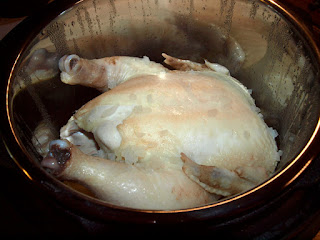 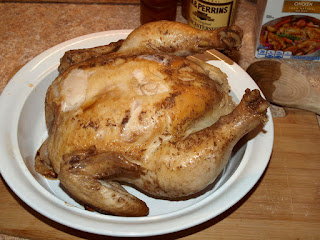 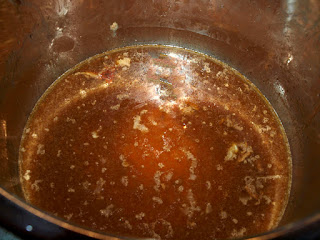 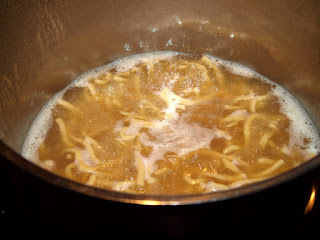 Pulled chicken for the soup 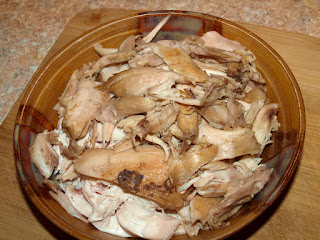 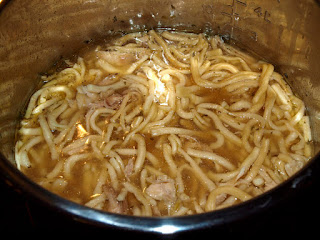 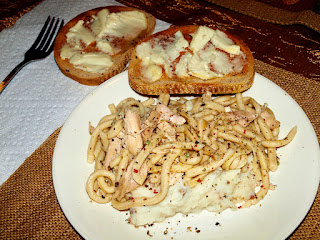