It was a pretty busy week end here. Our daughter came home Sat. to stay. Last Thursday I had done pulled pork and Friday I did a Cuban chicken for our supper so had plenty of leftovers for the week end.

Saturday at 5:30 the grandson and other young soccer players got to run on the field with the High School team during introduction. We had to go see that. Not sure why they start a game right at supper time! I was hungry so had to have a hot dog & some popcorn. I didn’t stay long; the wife and daughter stayed and then they all went out to eat after the game.

Sunday we stopped to see my 94 yr. old Mother and went to see my daughter who is in a rest home from a stroke. I had a cooler full of my leftovers I vacuum sealed and froze I took to her husband. This always leaves me depressed a few days. We stopped at a Cracker Barrel and ate before heading home.

For today I did beer brats, one portabella burger for the daughter in law, Bob Evens pasta w/double cheese and apple wood smoked bacon and some fresh asparagus. A few years back I would want most of my side dishes made from scratch. Getting older I use some shortcuts for easier meal prep. Bob Evan’s sides are all pretty good.

For the brats I added some sliced onions to a pan with some butter and it went on my Traeger at 185 deg. along with the brats for an hour. After a half hour I added a can of beer to the onions. I had my Weber Spirit heated on Med, about 400 deg. and browned the brats about 4 minutes per side and then they went in the beer bath on my smoker.

I had chopped some red pepper and onions for the portabellas. I had cleaned the stem and ribs from the mushrooms and seasoned with some garlic herb salt. I sprayed them with a little olive oil and they went rib side down about 3 minutes the turned them and filled with the peppers & onions, shredded mozzarella and some shredded Manchego cheese. They were on 4 to 5 minutes to melt the cheese. My wife was heating the pasta and the asparagus in the microwave. I had drizzled the asparagus with olive oil and white balsamic vinegar and seasoned with garlic herb salt.

We all thought it was good. The Bob Evens pasta is pretty darn good for bought and an easy side. Our daughter would never eat asparagus but my wife told her to try the fresh. She did and went back for seconds. There was sauerkraut and mustard for the brats; I had Maille mustard and some of my Kimchi on mine.

Brats & onions on the smoker 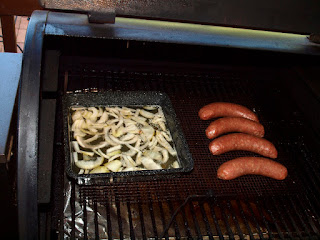 Browning the brats on my gas grill 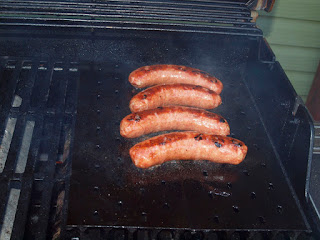 Brats added to the beer & onions 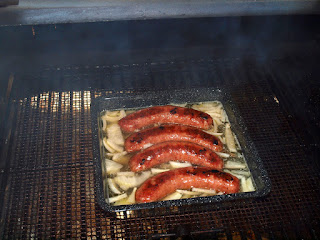 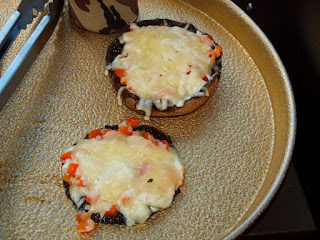 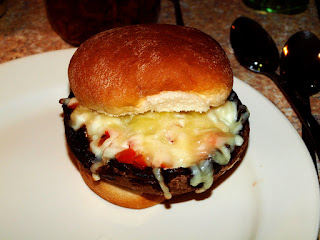 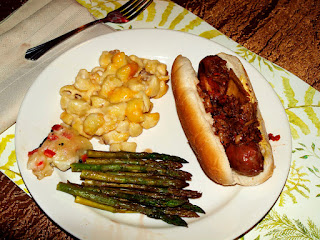