My Traeger after 6 + Years

Yesterday I washed down my Traeger with some simple green. The lid was getting pretty brown but got most of it off. Today applied a coat of mineral oil to it. For being used 6 years it almost looks new. I had sanded down the smoke stack, paint pealed due to operator error and got too hot. The barrel under the lid was corroded some from drips; I sanded it down and repainted it and the stack with some hi-heat Rustoliem. Other than that the rest of the paint is in good shape.

When I bought it in 2010 I joined a forum for pellet smokers and a lot of people were adding fire bricks in the bottom. The thinking was the bricks acted like a heat sink and held temps better especially over long cooks and they would help during cold winter weather. Five of the fire bricks fit into my Traeger, two on each side of the auger tube and one across the end of the fire box. Last summer I took them out and have never put them back in. Did they help, I am not really sure. Last winter I did not note that I burned more pellets without them, but it was a mild winter. Some in more northern areas may find they help.

Most manufacturers sell insulated covers for winter use. I did use a welding blanket the first winter but it was kind of a pain taking off & back on except for long cooks.  I think wind effects heat loss more so than cold weather. In the winter mine is pretty well protected from any wind.

After a couple of years my heat shield got a bad warp and would not set down right. Instead of buying a new one I got 3 steel plates, ¼  X 4 X 12 inches and bolted them to the underside of the shield and it took the warp out. I also get the effect of the steel acting as a heat sink and maybe that’s why I don’t miss the bricks.

In 2014 I was finally able to buy a Savannah Stocker Controller V.3 from Billy Merrill. It has been great for me; from 180 deg. to 250 deg. it holds usually +- 15 deg. with enough cycles to give out good smoke. At higher temps it will hold +- 10 deg. and usually +-5 deg. After opening the lid sometimes I will get a 20 to 30 deg. overshoot when it tries to recover but will correct itself.

I had problems with burn back, pellets in the auger tube burning; this is usually indicated by smoke coming from the pellet bin. This happened mostly after shutting down. I installed a manual switch so I could run the fan after a shutdown. After a higher heat cook I lower the temp and don’t shut down until I am below 250 deg. The Savannah Stocker has a shutdown mode where it continues to run the fan until it’s below 120 deg.

Most of the new pellet smokers now have PID controllers and are a lot better than the Traeger. Traeger recently updated their controller and now claim they guarantee it to hold temps +- 15 deg. If that holds true it’s not bad. I have not read any reports from new owners.

Not everyone can afford $1200 plus for a smoker so one at $700 is pretty inviting. Another smoker in that price range is the new Camp Chef and they have pretty high quality cooking equipment. 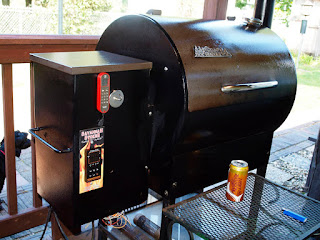 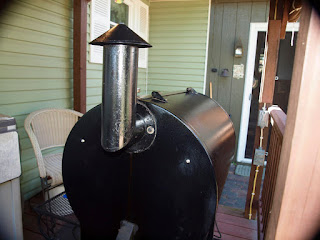