My Mother fixed a lot of ham and beans when I was growing up; my Dad’s favorite meal. She always had some cornbread with them and Dad liked navy beans. I didn’t really care for them then but I ate some because that is what we had. Now I love beans fixed about any way.

I like to use northern beans but for this time I had a pound of yellow eyed beans to use. They are about the same size as northerns but to me are a little more tender and sweeter.

I took three days soaking the beans, cooking the ham bone and finally assembling all for the ham and beans with some skillet cornbread.

Monday I put the beans in water to soak overnight. My ham bone from a picnic ham had plenty of meat left on so I covered with water, added two stalks of celery, two carrots, a med. sweet onion, salt and pepper. I brought it to a boil and then turned to a slow boil for 1 ½ hours. I removed the bone and removed the meat after cooling. I discarded the veggies, well I ate the carrots, and strained the broth then it went in the fridge overnight. 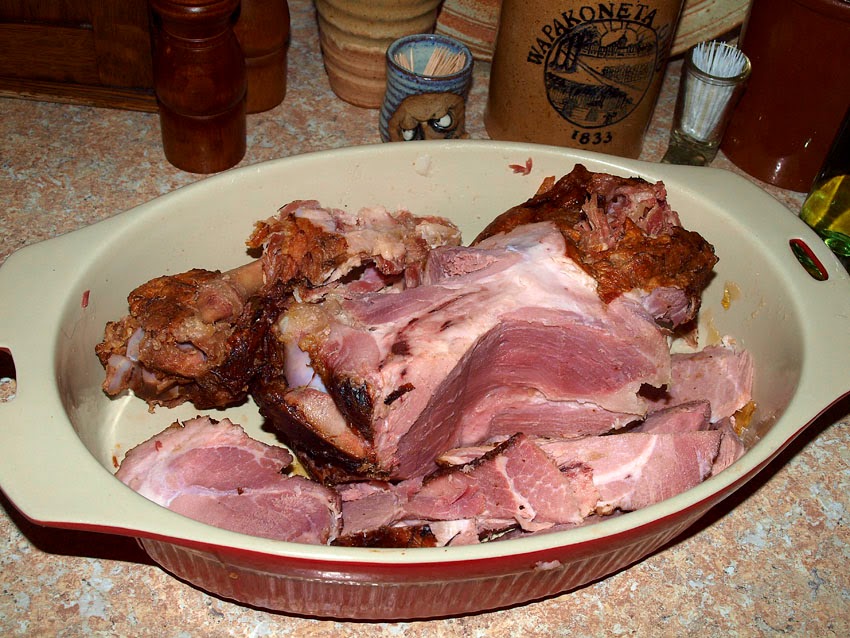 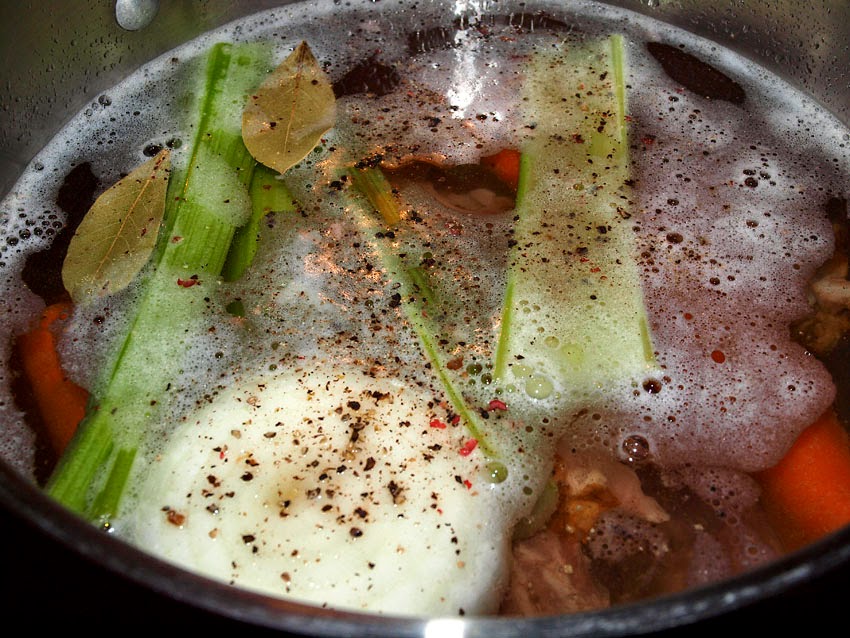 Meat from the bone 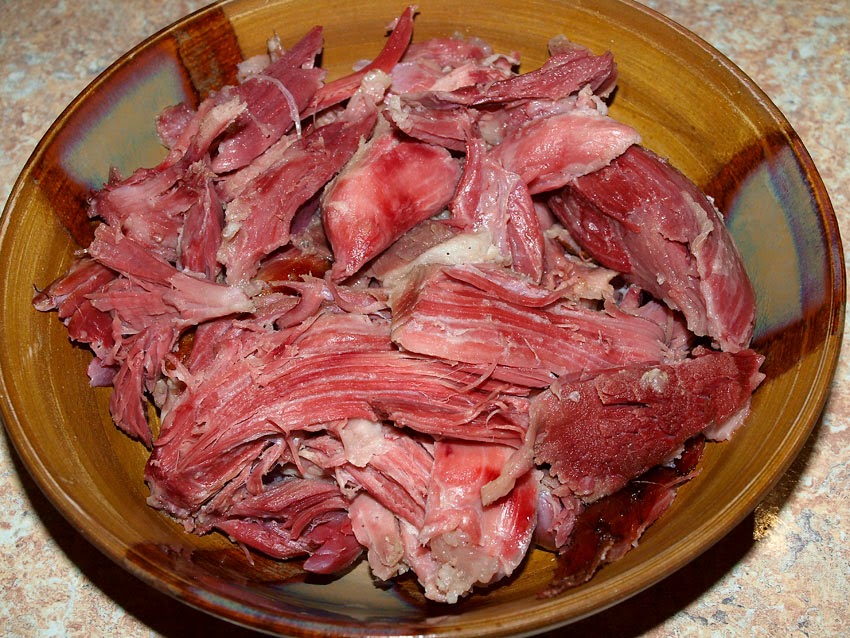 Tuesday I skimmed all the fat from the broth. I drained the beans and rinsed after saving out a cup of the water for making a roux later. I chopped two carrots, two stalks of celery, and a medium sweet onion into a 1/4 inch dice. I minced two garlic cloves. I added the carrots, celery and onions to a stock pot with 2 tablespoons of bacon grease and sautéed until soft. I added the minced garlic and cooked a few minutes longer then added in the beans and enough of the stock to cover well. I added some salt and pepper brought it to a boil and then slow simmered for 1 ½ hours. I chopped the ham saved from the bone and added to the pot. I cooked it another ½ hour and then cooled and in the fridge overnight. 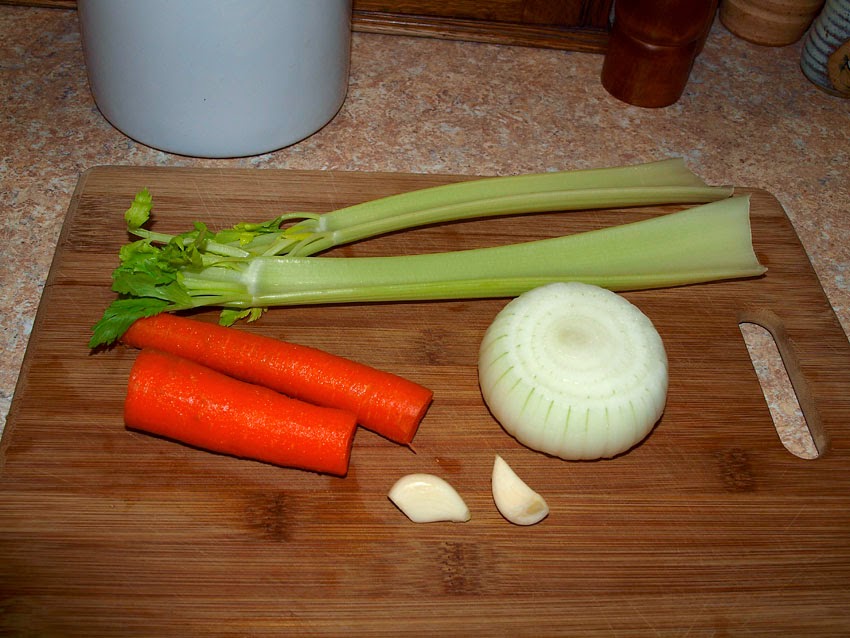 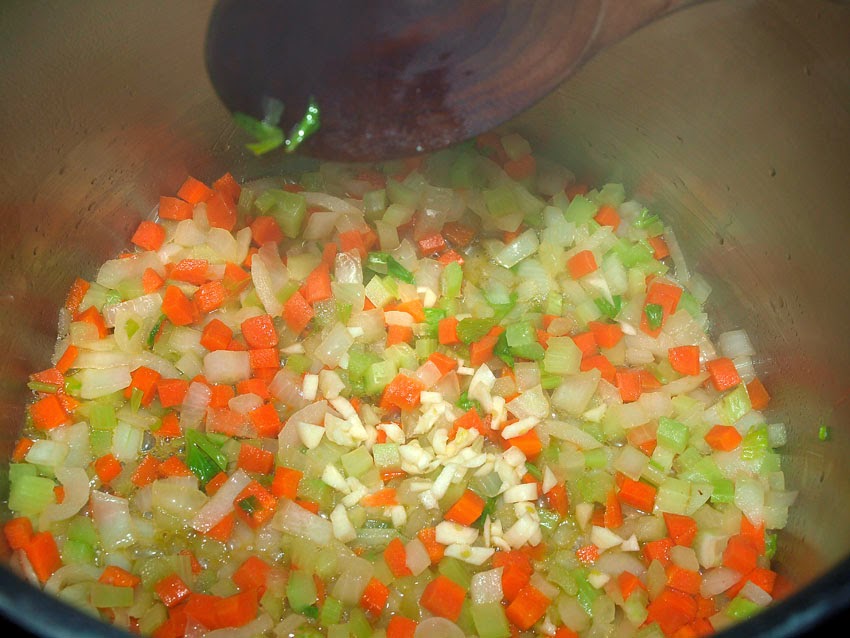 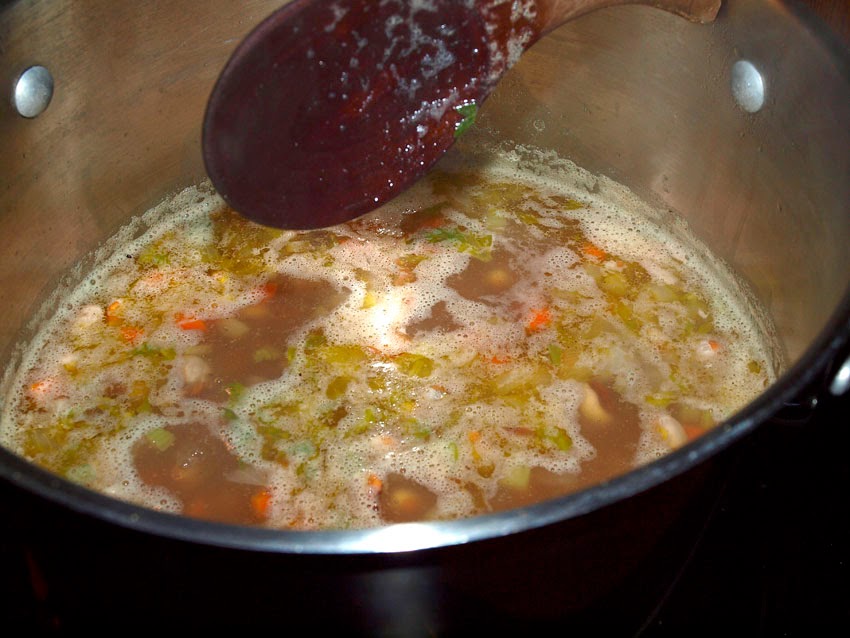 Ham chopped and added in 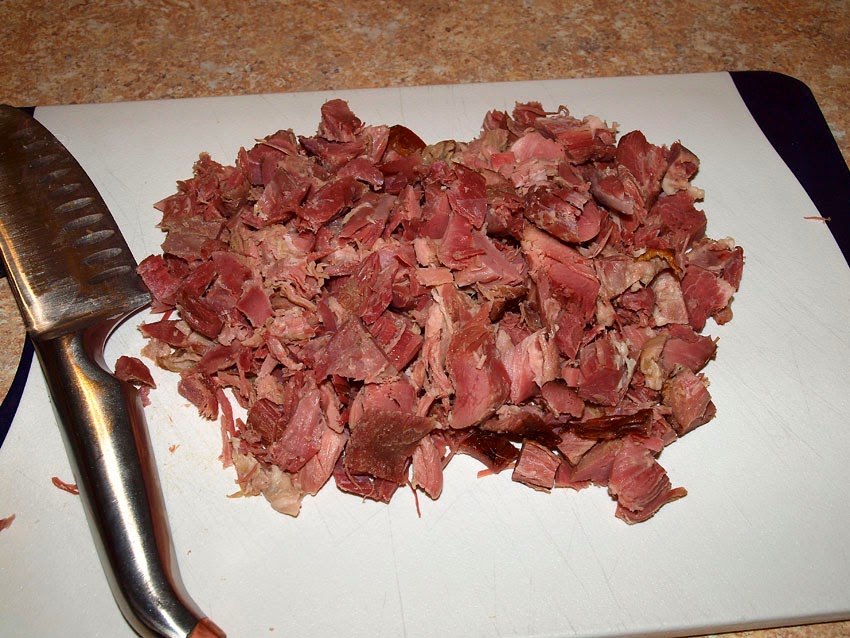 Wednesday I baked a skillet cornbread using my favorite mix, Miracle Maize Sweet. At supper time I heated up the ham and beans to a boil. I made a blond roux using a tablespoon of bacon grease, about two tablespoons of aspic I saved from the ham, two tablespoons of flour and some of the saved bean soaking water. I added it to the pot along with a teaspoon of Penzey’s Cajun seasoning and a few drops of Cholula hot sauce. I let simmer about a half hour. I served a good helping of the ham and beans over cornbread, topped with some chopped sweet onion, Cholula hot sauce and fresh ground pepper. I had a piece of buttered cornbread and a Liny’s Hoppin Helles with it. It sure tasted good! 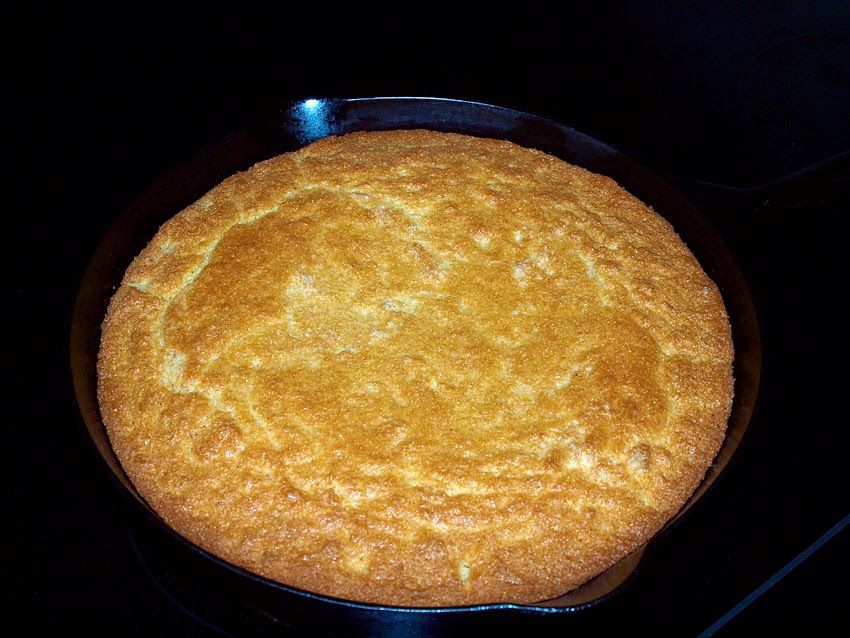 Bacon grease and ham aspic for the roux 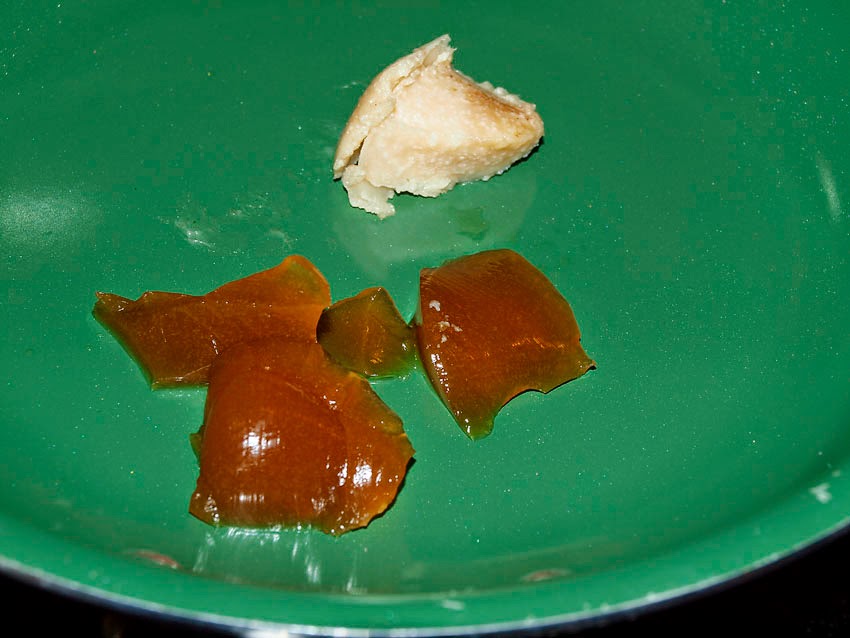 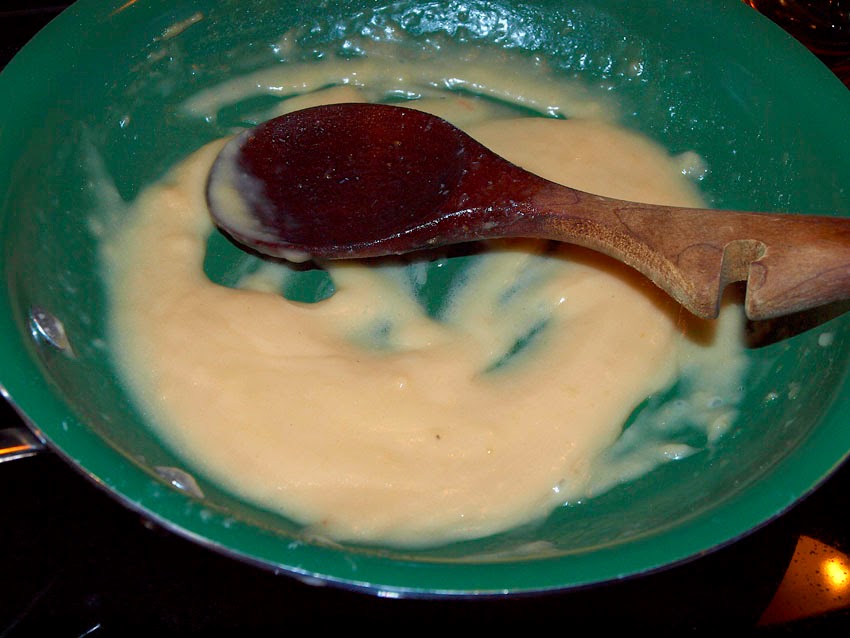 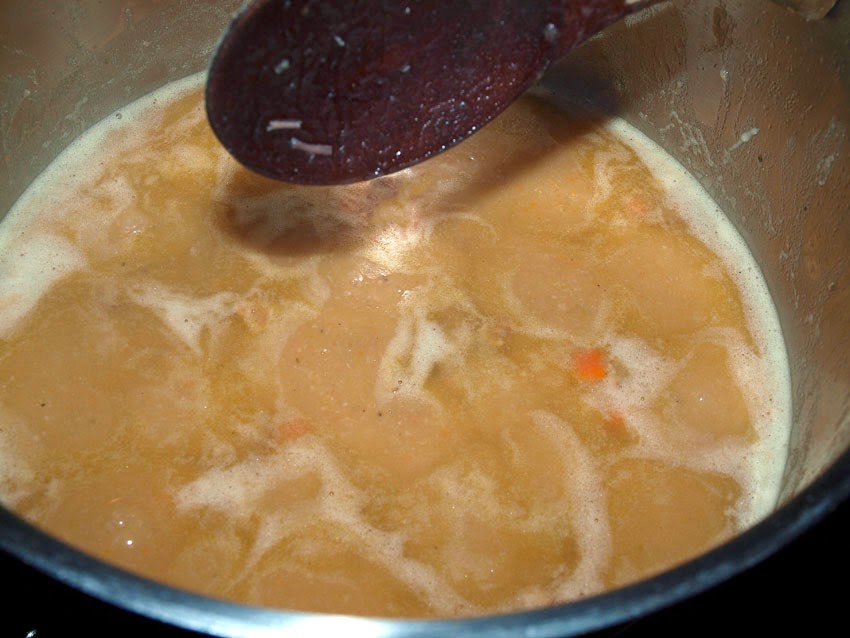 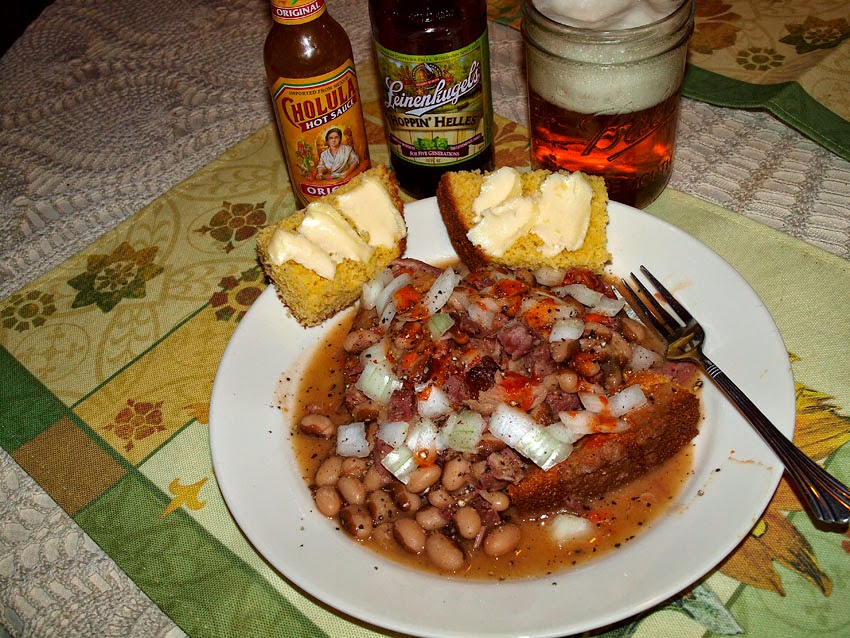