Latke Burgers and a Salad

I wanted to fix something different and thought of latke burgers. I thought I had something new but searched the net and had been done before. Most of the latke burgers were just a thin latke on a burger patty. Some called potato burgers had shredded potatoes mixed in the burger.

I wanted to try these out on my griddle but was pretty hot today and my one knee was bothering me so just did stove top in my Lodge CS skillet. I used Ore Ida hash browns; you can grate your own but the frozen ones are already pretty dry. I didn’t have a recipe just mixed ground chuck and the hash browns for two patties with equal amounts. Added some grated onion, a beaten egg and ¼ cup plain bread crumbs. I mixed well and made two patties.

I made up the salads and added some sliced onions and garlic flakes to mine and had blue cheese dressing. My wife likes vinaigrette on hers. I mixed some sour cream and dill relish for on the sandwiches.

I added olive oil to cover my skillet and heated on medium (5) on my electric glass top stove. I did them 4 minutes then and flipped for another 4 minutes. They were plenty brown but were not up to temp so I covered them with a lid for another 2 minutes and were good. I had toasted the buns under the broiler.

They tasted pretty great for something different. Mine were a little thicker than I wanted. I suggest making them just ½ inch thick and cook at a little lower temp than you normally do burgers to get done and not burn the potatoes. 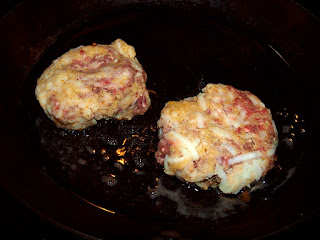 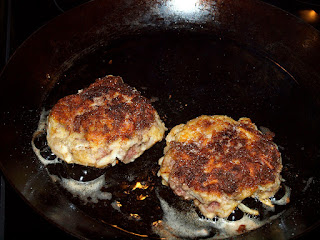 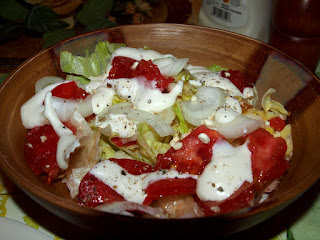 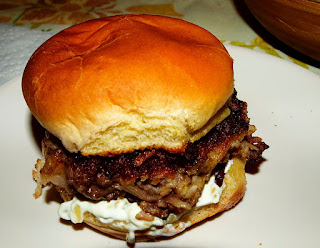