Another hot one today, 91 deg. and 55% humidity! They were saying severe t-storms for this evening but the rain gods were with me, the one strong cell split and went north and south of us. Then another cell behind it dissipated over Indiana.

Our son came down before it got too hot and mowed the back yard for me. I told him what we were having for supper and said sounded good. I said let me know because I will have to get more wings and some macaroni. They decided to eat with us so my wife went for more wings and pasta.

I had three jars of sauce from Blues Hog and their rub to try and for the ladies I had Penzey’s Galena St. rub and some sauce from my butcher that is on the milder side. I tasted all the sauces from Blues hog, Honey Mustard, sweet mustard but not too mustardy and a little heat, Tennessee Red Sauce, a thinner vinegar sauce, hot and a touch of sweet, Blues Hog Original, sweet, spicy and hot.

I got my mac and cheese ready early; cooking the pasta on my Camp Chef burner. I mixed up inside and got ready for the oven at 5:00 to bake for an hour at 350 deg.

Everyone who wanted a salad made it up with some tomatoes and I brought the wings in at 6:10. The mac n cheese was done with a nice crust on top. I told all where the different wings were but forgot to tell the son to remember for a report. He said they were great but didn’t know which were which. My wife had the sweet mild ones. I thought the grandson would try the hot spicy ones since when we ate at the good Mexican place here in town he was putting Habanero red and green sauce on his tortilla chips; but he opted for the sweet ones.

I thought all 3 of the Blues Hog sauce were really good. The Honey Mustard was the best mustard based sauce I have had. I did like the Tennessee Red and the Original best and can’t wait to try them on ribs. For heat I would say the honey mustard was mild and the other two were close to medium.  I think their sauces have done well at BBQ comps and one placed first at the American Royal last year. I always do like wings with a good sauce and tossed with a 50-50 mix of melted butter and hot sauce. The DIL didn’t have any wings; she ate salad and mac n cheese.

I thought I had a pic of the mac n cheese out of the oven but all you get is on the plate. I thought it was one of my better mac n cheese dishes. 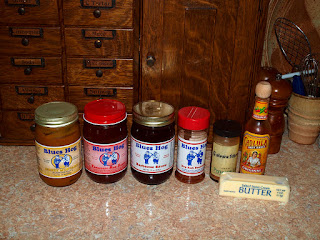 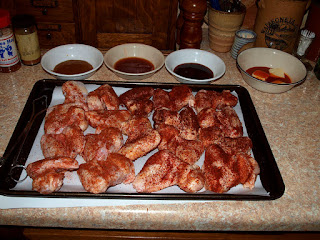 An hour in, ready to sauce 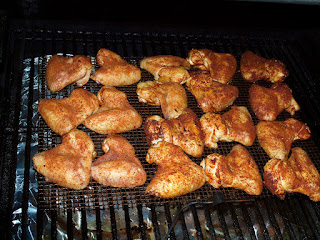 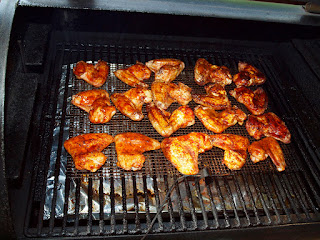 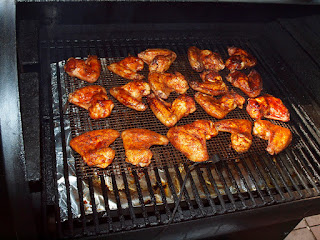 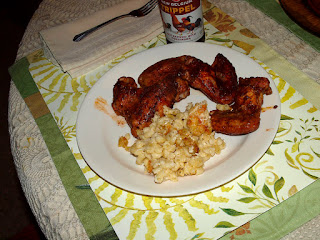 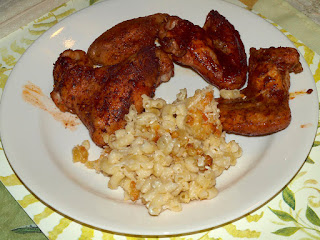