Flank Steaks for Sandwiches and One for Supper

Last week end Brad from Beer & Wine Depot offered me a frozen pack of beef he thought was Round Tip Steaks. At $2.00 a pound I said sure. It weighed 5.75 pounds. When I got it thawed out there were 5 pieces and it looks like flank steak to me. I searched and there is a heel of round that looks like what they could be. It is one muscle though since there were thin membranes on both sides. Either way they should be cooked on a gas or charcoal grill. Brad said he did a pack and sliced it thin and it was tough but had good flavor.

I can’t handle grilling 5 flank steaks at one time so I decided to roll the 4 and save one for tonight’s supper on the grill. I sprinkled all with some Adolf’s tenderizer yesterday and placed in a covered Dutch oven and in the fridge. They were in about 12 hours when I poured a bottle of Italian dressing over and made sure all were covered then back in the fridge for about 10 more hours.

This morning I drained them in a colander and wiped some. I made two rolls from the four; tied with butchers twine. The rolls and the one for tonight went on a wire rack in a roaster pan and in the fridge about 10:00 AM. I cleaned up my Traeger and put new foil on the drip pan.

I heated up the smoker at 180 deg. and placed the two beef rolls on. I thought about searing them first but I just added some smoked paprika to the top for a little color. I did not want them to go past 132 deg. IT. After a half hour I started to ease up the temp until I had 250 deg. at grill level. At about an hour in I put a meat probe in the smaller one. It took about 1 ½ hours for the smaller one and another 10 minutes for the other one.

I tented them with foil and when cooled I wrapped good in plastic wrap and in the fridge. I will slice them up thin on my slicer in the morning. I am using some for Italian beef in the crockpot tomorrow and freeze the rest.

About two hours before cooking I added some salt to the one and back in the fridge. My side was a heart of romaine sliced in half and grilled then added a slice of tomato and some Champagne dressing.
I heated my Weber spirit to medium heat about 400 deg. I followed a Weber recipe that called for 8 minutes on each side for flank steak. Near the end I added the romaine and then some Ciabata buns with butter and garlic to toast. I let the steak rest for 5 minutes.

I sliced the steak on an angle and about as thin as I could and served. The wife and I both liked the steak but it was a little dry and tough. It was a good medium so 8 minutes was too long. A few pieces I got the thinnest were tender.

One of the steaks and the tenderizer 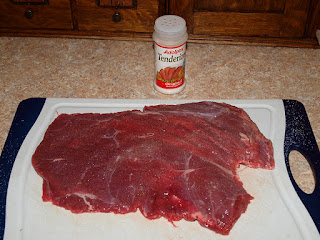 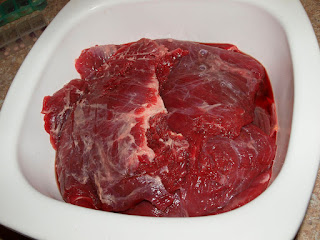 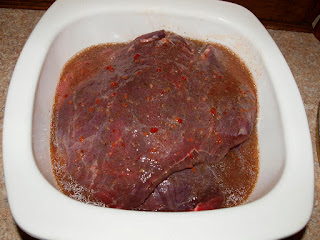 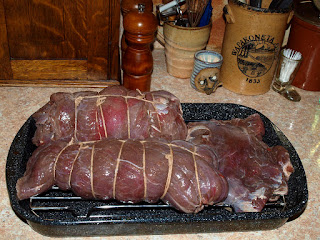 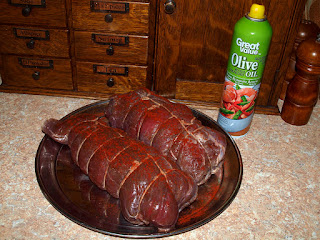 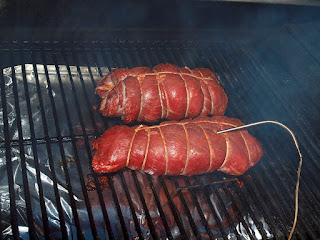 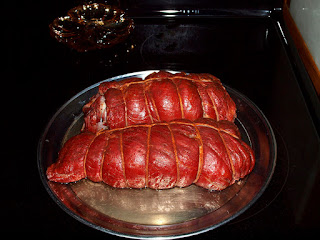 I did up this bacon while the smoker was still
hot. I had sprinkled some of Savor's Super Pig
seasoning on it. I ate a few pieces and soon
after the wife got home it was all gone! 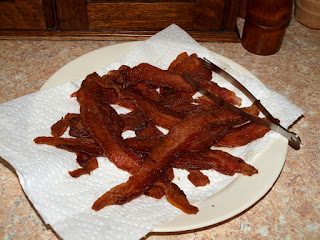 The steak for supper on the Weber Gas grill 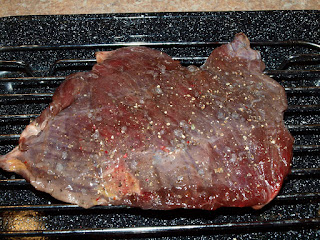 Our salad and garlic bread 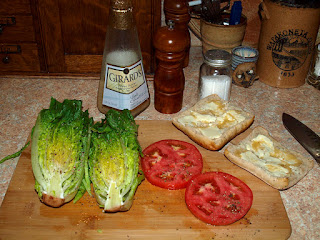 Ready to take in and serve 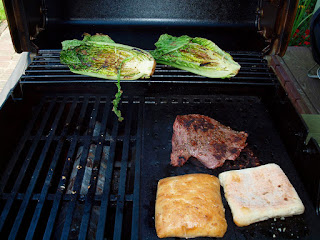 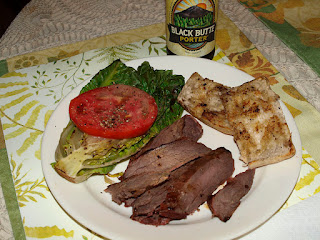