It was a nice day for the 4th; as a rule it always seems to rain here. It looks like nice weather through the week-end. We always like to go to the local St. Joseph annual picnic and haven’t missed many over 40 years. We like the greasy fair fries with malt vinegar and salt and some whole hog sausage patties done on a flat iron grill. I get a double with cheese, mustard and onion. My wife has to have a lemonade shake up. So we have to stop at the lemonade stand, then the French fry stand and end up at the sausage barn to eat it all.

When the kids were young we stayed the evening to see the fireworks at 11:00. My wife always played bingo with the kids until they were old enough to run around. I played show down poker and drank some cold beer. Years ago they had bottled beer iced down in water troughs and you could walk around with it. Then it got too big and some would get rowdy so now you have to go to a fenced in beer tent to do any drinking.

My wife went with the kids and grandson at 5:30. I didn’t think I could take all the walking so I stayed home with the dog and had our own picnic. I had two ears of corn left from last night so I cut the kernels off and fried it in some butter; and had added onions, peppers and bacon crumbs.

I heated the Weber Spirit on medium to grill the old fashioned bung bologna. As soon as the grill was hot I fried the corn in my Lodge CS skillet on my Camp Chef Pro 30 burner. When the corn was getting done I did the bologna for about 4 minutes per side and put the bun on to toast some.

I had a slice of Vidalia onion and mustard on my sandwich, the corn tasted good and I had a Tennessee tomato sliced with salt and pepper. The dog got 3 small bites of the bologna and was happy too!

The tomatoes are from a veggie stand that the guy drives down and brings in. They are a few weeks earlier than our garden tomatoes here and almost as good.

Last night the fireworks started, there were some neighbors setting off big ones. They sounded like a cannon going off. I expect to hear more later on tonight. A Dalmatian I had was scared to death of the noise but my cock-a-poo does not pay any attention to them. 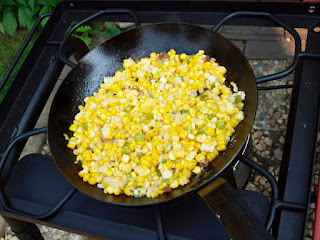 Bologna on the grill 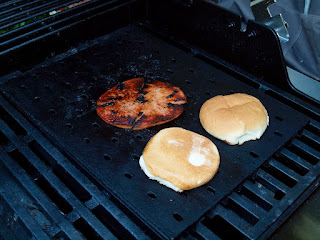 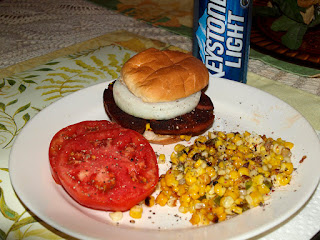