Safety and some Tips on Using a Traeger Pellet Smoker

I have been using my Traeger 07E pellet smoker over 4 years now. I cook summer and winter on it. Since a pellet smoker has to have electricity to run it is a good idea to use a ground fault interrupter. It will protect you from a shock hazard and may help save your equipment in case of a ground. I have one on a short cord that I bought at Lowe’s for about $26 US.

My pellet smoker is on a covered wood deck so I can use it in any weather. The deck is 6X6 feet and up against my house. This is not the best example for a safe cooking area. I have a fire extinguisher handy and there is a water spigot next to the deck. I also have the smoker setting on a fireproof mat. I bought the mat at Lowe’s; it is rectangular and made with cement. The manufacturer also makes a round one.
Any type of outdoor cooking equipment used on a wooden deck should have one of these under it.

The most common hazard is probably having a grease fire. I have never had one but I don’t do much cooking over 300 deg. F and I use my gas grill for searing. I also keep my smoker clean, vacuuming out and changing the foil on my drip pan. Some smokers have a searing area or a different drip pan to use for grilling and searing and are probably more apt to have grease fires.

One problem with Traegers is burn back after shutdown. It has an auger that lays flat (level) to feed pellets to the burn pot. I have had it; the fire is seeking oxygen and draws it from the auger tube via the pellet bin. It can burn back into the tube and if it ever got into the pellet bin you would have a nasty fire and damage your smoker. You can make this less likely by not shutting down after a 250 deg. or hotter cook. Turn the setting to 180 deg. and let it cool down before shutting down.

Before I had the shutdown fan and I would turn the smoker back on at the lowest setting and let it do a restart to get any burning pellets out of the auger tube and then shut down.  I even had it several times when I had the fan switch and even once with my new controller. It was not bad but could see a little smoke coming from under the pellet bin cover. I found that by leaving the lid open it helps it to draw better and it soon goes out. Since my smoker is on the wooden deck I keep a pretty close watch on it until it shuts down and I also never leave it plugged in.

Most pellet smokers that came out later have a shutdown feature that runs the fan until a low temp. is reached. I installed a manual fan switch on mine and now my new Savannah Stoker V3 controller has the shutdown feature and takes it down to 130 deg. before shutting down.

After I got my new controller installed I wanted to empty out the pellet bin and run a cycle to clean out all the pellets from the auger tube. I also wanted to check the burn pot in action to see how the pellets were burning. I had done this a couple of times before but I had replaced the heat shield and closed the lid until it burned out and cooled down. I knew it got pretty hot with just what pellets were left in the auger tube it would get above 400 deg.

This time I failed to put the heat shield back in; I assumed it would just go above 400 deg. and burn out. Well it went past 400 and kept climbing; it got up to about 760 deg. on the controller, the smoke stack cover was glowing red underneath burning the soot off and the powder coat paint blistered. I was ready to grab my fire extinguisher but it started to cool down and I was glad of that. So a word of caution; never try to run your pellet smoker without the heat shield in place!
One other thing to watch for is unless you are there to see a flame happen out shut down the smoker and when cool enough take everything out and check the burn pot to make sure it’s not full of pellets. The smokers do not know the flame went out and most will keep on feeding pellets. After a cook one night I had set the smoker on smoke mode to cool down. I forgot to check it until late and when I did it was still on but clod. I checked the pellet bin and it was empty. I assumed it had run out of pellets and the flame went out.

The next day I was getting ready to cook and I loaded in some pellets and started it like usual, on smoke mode 180 deg. with the lid open and as soon as I saw smoke I closed the lid. I went inside to get some meat ready. When I went back outside the smoker was at 350 deg. I knew that something was wrong and shut it down. When it cooled down enough I opened it and inspected the fire pot. It was clear full of pellets and some had run over the side. I had watched the pellet bin enough to know it has some flat spots on two sides of the opening to the auger and it would feed pellets forming a funnel as it does leaving a lot of pellets still in there. I figured what happened the day before was it did this and the auger ran dry for a period and the flame went out then vibration caused more pellets to feed so it ran it out and filled the fire pot.

I hope this will be of use to anyone with a Traeger and some applies to all pellet smokers. Just get to know your pit and Let’s Talk BBQ forum is a good place to learn about most pellet smokers.

Here the yellow cord has a GFI in it 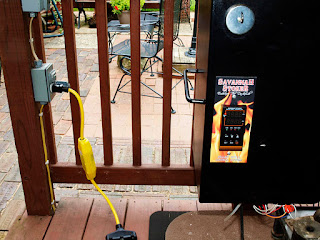 The brown mat is fireproof 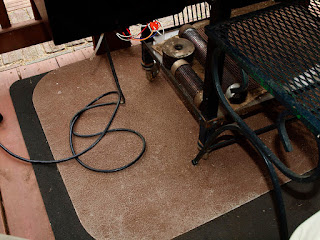