Was it ever HOT today 91+ deg. When I started my smoker at 5pm it said 97 deg. I had a hard afternoon; I sat in the shade on my smoke deck, sipped on iced beer and watched the grandson pull weeds! He did a good job.

I have been on a web site discussing the history of Bohrer and Moore Meat Packing and they talked about how great their hot dogs were and I just had to have one tonight!

I had brats and old fashioned hot dogs from my butcher Kah Meats. I had bought a can of Castleberry’s chili dog sauce to try, it is from Georgia. I had it on my hot dog and some of my Kimchi on the brat. I had some mustard on both and chopped onion on the dog. My wife just had a brat and had a large salad too. She is sick, has ketchup on her brats!  I ate more of the kimchi on the side.

I smoked the brats & dogs for an hour on my Traeger at 180 deg. and finished on my Weber about 4 minutes per side. I had sprayed the buns with olive oil and toasted them about 2 minutes. That was some good eating! The Castleberry’s chili sauce was pretty god coming from a can.

I had added two of Kah's snack sticks to se how they would come out; not bad but like them the way they come. 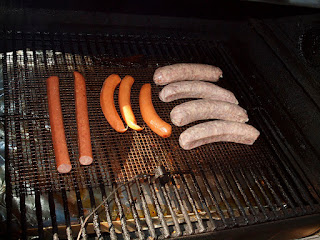 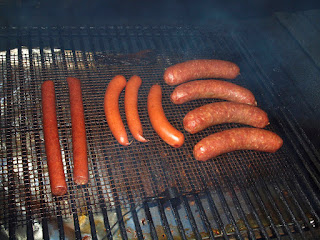 Finished on my Weber 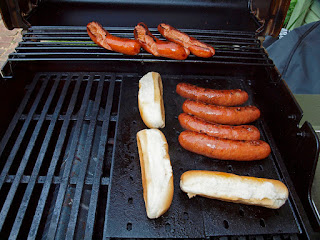 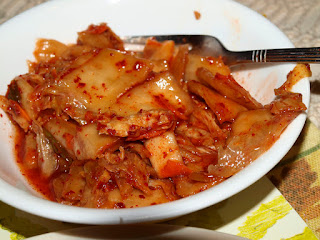 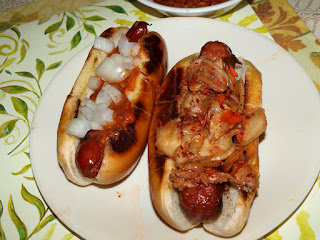