Sliding Billy had a nice day and cooked up a mess of meat. Some of the rain he sent this way missed us so we had a decent day to cook out. I was glad of that for a while I thought I was going to have to cook inside. It gave me a chance to try out my new Camp Chef burner.

My wife went with the kids this am to see the grandson play in soccer tournament. Me and the dog made a food run to my Mothers.

I spotted these soft flour tortillas shaped like a bowl and got some to try. I had two pieces of sirloin tip steaks and I grilled them on my Weber Spirit on Grillen Grates and for once used the correct side. I got them in some marinade after getting back from my Moms. My marinade was ¼ cup olive oil, and filled the ¼ cup ¾ full of lime juice, a rounded teaspoon of chili powder, ½ teaspoon cumin, a teaspoon of sugar, a pinch of red pepper flakes, garlic flakes, salt and fresh ground pepper. I made it on the mild side for my wife. The sirloin was in the marinade for 4 hours.

The other ingredients for the fajitas was, sliced red, green, yellow and orange peppers and some sliced onions all sautéed, salsa, crumbled Queso fresco cheese and sour cream.

I had everything ready to go and my Weber on med. at 400 deg. I added some olive oil to my DeBuyer skillet and started the peppers sautéing on the gas burner. I did the steaks 1 1/2 minutes turned 90 deg. trying for nice grill marks and the same on the other side a total of 6 minutes. I took it all inside to make up the bowls. I would have been better off not worrying about grill marks and 4 minutes would have been better. The steaks were medium but still tasted great.

The bowls were so full we had to eat with a knife and fork.  They make for a nice display but I would prefer round flour tortillas to fold up. It was a great mix of flavors but after one bite I added some Cholula chili lime sauce to mine for some heat.

I was happy with the Camp Chef burner; it had great heat control and was able to get a little brown on the peppers and onions without getting them too soft. 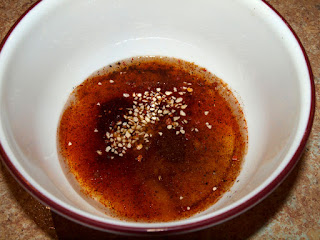 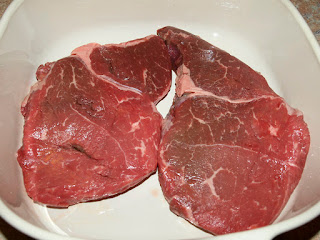 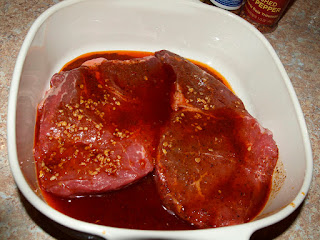 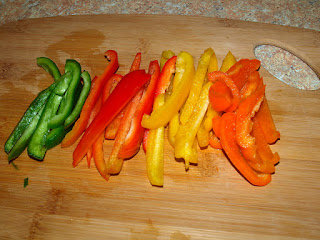 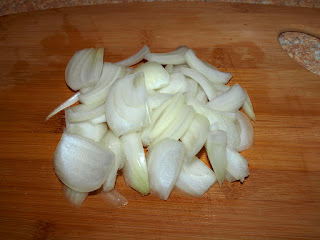 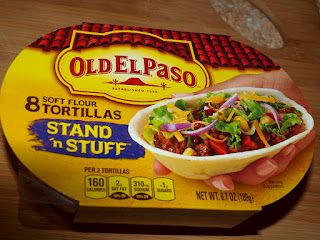 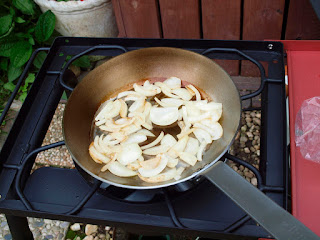 Steaks are done and bowls heated 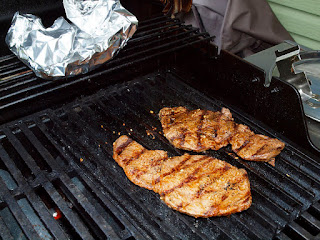 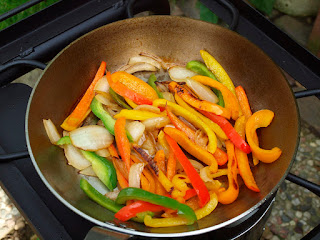 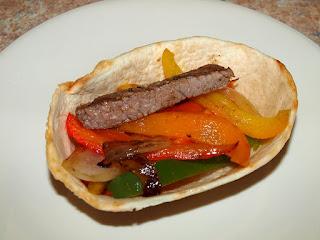 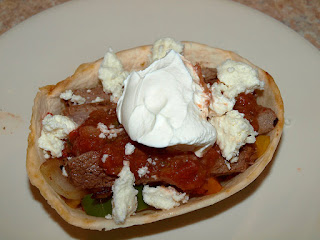 My supper with hot sauce added 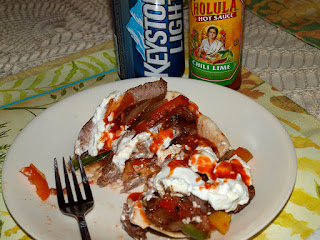