Her is my account of the past week-end and below are some photos of the Mohican River Inn where we had the gathering and some of the food we cooked and ate.

The past week-end seven of LTBBQ members, family and friends met for a gathering to eat some great BBQ and share  friendship. It was the most fun I have had lately. For some of us it was a first chance to get to know each other after conversing for several years on the LTBBQ forum.

Cliff (TenthunteR) planned and organized it plus provided cooking equipment and prepared a lot of the food. He made a good choice on the site, Mohican River Inn, Loudonville, Ohio. We had clean and comfortable rooms and a covered patio for our dining. The weather was great all week-end.

Attending was Cliff, his wife Tammy and two children, Pam, her g-granddaughter and her best friend Donna, Old Dave, his wife Jan and Barney, Art (ACW3), Tim (teesquare), Mike (High on Smoke), Myself (Smokin Don) and wife Nancy. Cliff’s friend Jason and son came Friday evening to join in. I think a couple members who planned to come had to cancel out.

We arrived a little late Friday afternoon, got lost but not going into that! All were there but Art, Tim from N. Carolina and Mike who came the farthest from Savannah, Georgia; he met Art and Tim to ride with them. Some good food was ready, bacon and cheese wrapped sausage chunks done by Old Dave on his cobb tabletop charcoal grill. Were they ever good. He also had some pork tenderloin done on his GM pellet grill for sandwiches with some raspberry sauce, delicious!

The southern boys finally made it, later Cliff had some pulled pork, mac and cheese and coleslaw. He heated the pork and cheese on his new Mak 1 Star General, he got a lot of help from his wife Tammy too! We all had a great time talking and some of us had a little cheer from the back of Arts truck! The motel owners came and lit a big bonfire for  us to enjoy. I think it was about 10 pm when we all retired to our rooms.

On Saturday morning about half of the group went for a buffet breakfast 40 miles away. The rest of us stayed behind and had some breakfast, donuts, fruit and coffee from what the motel put out every morning. I had a good time chatting with Old Dave and wife  Jan. I knew Pam and got to know her friend Donna, her gg daughter Maci had a great time running around and she picked up on my needing a cane I was always leaving and would show up with it and say “here Don”,  she was my cane bearer!

Sometime after lunch Dave put on two racks of BBRibs and a meatloaf with help from his wife Jan and Barney kept check on them. Barney is an 8 yr. old miniature black and brown dachshund and well behaved; he had his own lawn chair. He was used to going with Dave and Jan to competition BBQ. I learned some from Dave watching him do his ribs. He and wife Jan put a lot of love and hard work cooking the week-end!

Cliff, Tammy and my wife got back from breakfast and a visit to a cheese place. Art, Tim and Mike did some more sightseeing. I put out a cheese plate, Cajun crackers, smoked pistachios and some summer sausage Sandman had made and sent along.

Art, Tim and Mike got back and we ate sometime after 5 pm. Dave’s ribs and meatloaf was done and Donna had made a great potato casserole dish.  Cliff made some great Jerk chicken for a second entrée; done on his Weber Kettle with Stoven pellet adapter. Dave’s ribs were perfect and meatloaf was good. Art heated up some of his delicious burnt ends on the Mak. I could have made a meal of those! Donna made a Mayo chocolate cake for dessert. Way too much food,  but sure was good! We all sat around and chatted enjoying another bonfire and retired about 9:30. I didn’t think anyone could out talk my wife but Tim did!

We planned a big breakfast Sunday AM before all left for home. Cliff put a ham shank on the Mak in the middle of the night. He made a batch of his good biscuits and provided his sausage for Pam to make her good sausage and gravy. Pam also made her delicious fried donuts with maple glaze then dipped in bacon!  I finally got to cook some; fried up 3 ½ to 4 pounds of bacon, some of Kah’s jowl bacon and some pepper bacon. I fried up some of Sandman’s honey bacon he had sent along then scrambled a dozen eggs. That was one good breakfast! We all cleaned up and got packed to head home by 10:00.

They wouldn’t let me feed them any baloney so I divided up the old fashioned bung bologna for all to take home along with some brats and snack sticks. It went by too fast but I was tired out and ready to head home. Thanks everyone for a great time!!

The Inn and Cooking area 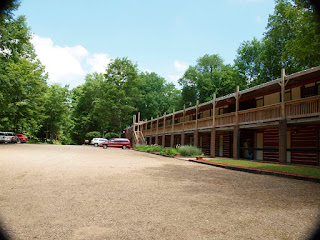 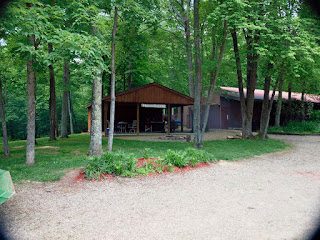 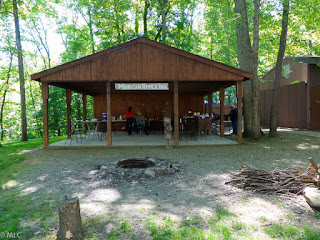 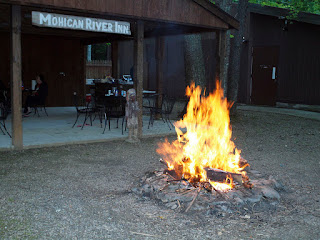 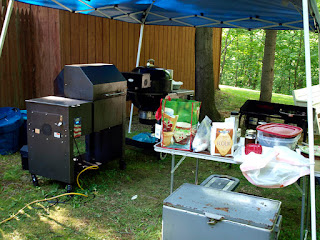 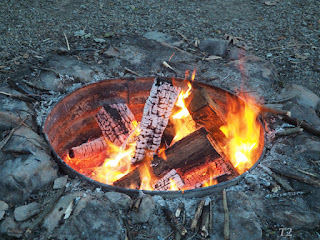 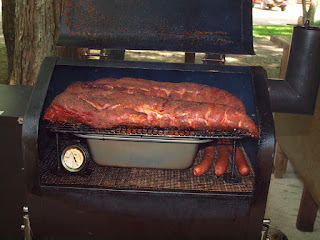 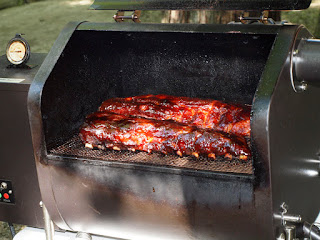 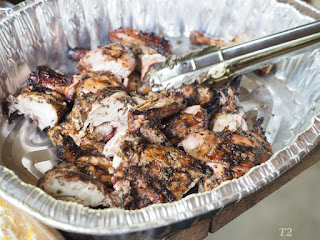 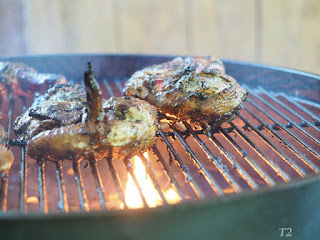 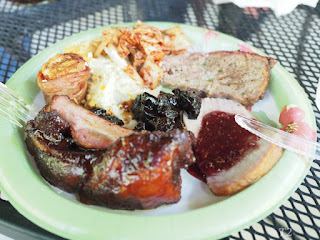 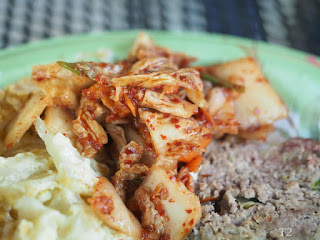 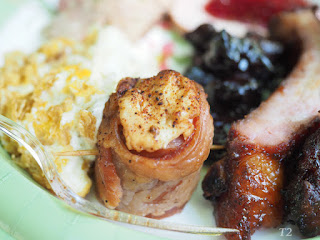 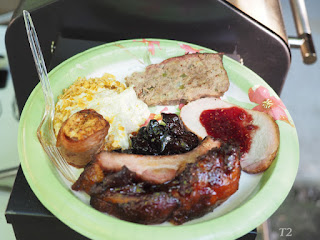 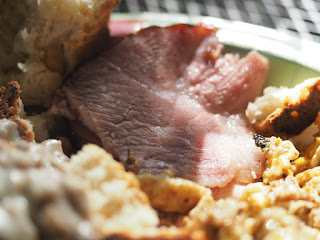 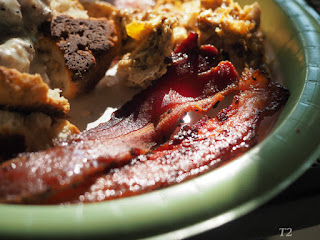 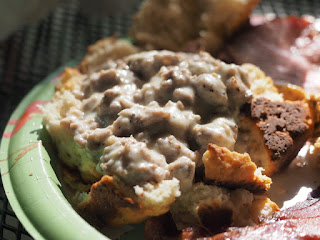 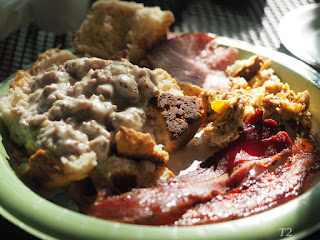 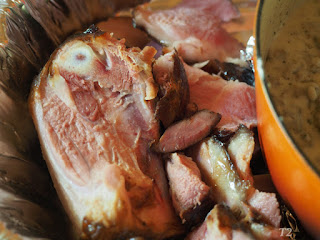 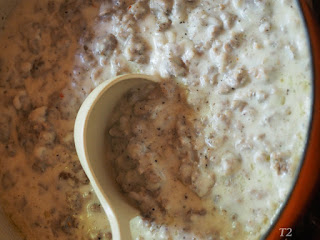 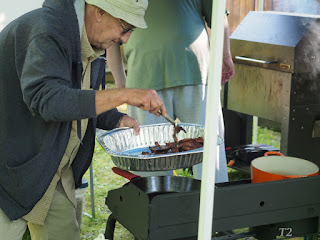 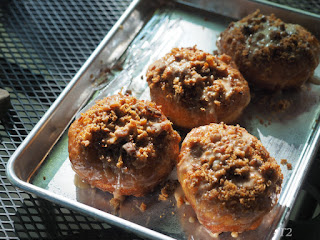 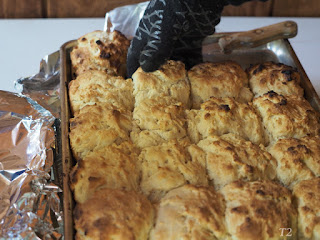